How to Fight Amazon Censorship 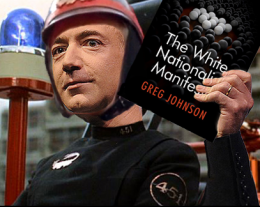 As we have already publicized on this site, Amazon has rolled out a new policy of censoring books based solely on their political content – specifically, those books which engage in thoughtcrime against the Establishment’s sacred cows of the unquestionable desirability of globalization, open borders, multiculturalism, and egalitarianism. Greg Johnson, Kerry Bolton, Jonathan Bowden, F. Roger Devlin, Kevin MacDonald, and Jared Taylor are among the host of authors who have already been victimized by this blatantly discriminatory – and entirely arbitrary – policy. They have also begun deleting product reviews by customers who are deemed to hold similarly unacceptable views. Unfortunately, we can expect that the list will get much longer, if nothing happens to dissuade Amazon from furthering this disturbing new trend.

Although it is true that we can continue to sell our books through our own sites, their absence from the world’s largest bookseller obviously greatly limits not only their accessibility but the possibility that readers previously unfamiliar with our work might discover them. As such, Amazon is trying to control the global political conversation by limiting readers’ ability to come across ideas with which they might be unfamiliar and judge them of their own accord; Jeff Bezos, it seems, doesn’t trust his customers’ judgment, and prefers to make those decisions for them.

Amazon did this quietly, like a thief in the night; their victims only found out that their books had been banned when they happened to notice that all trace of them had been removed from Amazon’s site, or when their publishers received generic form messages after the fact informing them that their books had been removed for unspecified “content guidelines” violations, followed by threats of even more extreme action. Here was one such message (click to enlarge):

Moreover, Amazon offered no opportunity to appeal the bans. And although several of the affected authors and publishers have issued public statements regarding the purge, including a press release by Jared Taylor, the mainstream media, unsurprisingly, has chosen not to take up the story. (We can be certain that the purging of books by Establishment liberals and Leftists would be greeted with indignant cries of injustice and accusations of “fascism.”) So unfortunately, we are on our own in this fight.

Unless Amazon is held to account for its actions, we can expect this situation to not only continue, but get worse. For now they are only testing the waters; if they encounter no resistance, they will be emboldened to become even more hostile to ideas they deem unacceptable in the future.

Below are several ways to contact Amazon and protest the company’s censorship. We urge you to call or write and demand explanations. Here are some questions you could ask:

In addition to voicing these concerns, if you have been a frequent Amazon customer over the years, it might bolster your argument to mention exactly how much money you have given them. This article from Business Insider explains how to easily obtain the total amount you have spent by using your purchasing records on the Amazon site. Mention this figure in your communications with them and make it clear that you’ll take your business elsewhere if they refuse to reconsider their violation of the right to free speech.

Remember to always be polite, however, lest we give Amazon’s apparatchiks a pretext to ignore us. And please let us know how Amazon replies by writing to us at [email protected].

Live Chat or e-mail: Log into your Amazon account, then click here to begin a live chat with a representative. Before you begin the chat, check the box to request an e-mail transcript. If you don’t have an Amazon account, send an e-mail to [email protected].

Social media: Please share this article or our previous articles about these attacks, Jared Taylor’s press release, and/or Gregory Hood’s article from American Renaissance about Amazon’s censorship as widely and across as many networks as possible. Also, you can write a Facebook post, send a tweet, share an Instagram story – anything to help spread the word about the latest efforts to silence dissidents.

Amazon is one of the wealthiest corporations in the world, and its CEO, Jeff Bezos, is the richest man in the world; and they have declared war on people like you. Don’t take it sitting down. Please, get in the fight and help us. Not only will we thank you, but so will the untold future generations who are depending on our work.

Portions of the above were based on an e-mail sent out last week by American Renaissance.