War Is Our Father 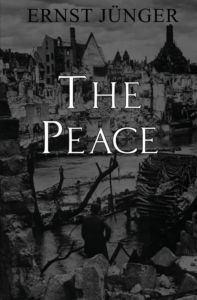 Ernst Jünger is representative of the German twentieth century in many ways; his books and essays are often visceral, violent, brutal, and profound. The First World War shaped much of his writing. Jünger articulated the new heroics of soldiers dealing stoically with the frightful carnage wrought by technology and envisioned a totalitarian future characterized by obedience beyond question.

At times he appears to exalt in the violence of total industrialized conflict:

War, the Father of all things, is also our father. He hammered us, chiselled us, hardened us into that which we now are. And forever, as long as the wheel of life still turns in us, War will be the axis on which it revolves. He trained us for war, and warriors we will remain as long as we draw the breath of life.[1]

Jünger’s ideas, however, changed over time. The Peace is a watershed work of importance that is markedly different when compared to his earlier writing. Rogue Scholar Press has published this new paperback edition. The publisher provides an informative, anonymously authored introduction to the work; they offer up some of the work’s publication history and situate it intellectually within Jünger’s wider catalogue.

Jünger provides a plan for a lasting peace in anticipation of the Second World War’s end. He initially wrote the book in 1941, burned the original manuscript that summer, rewrote it in 1943, and completed it with revisions in 1944.[2] In his journal entry for August 19, 1942, Jünger writes that “[i]n the morning papers destroyed, among which the constructive peace scheme that I set down this winter.” He destroyed his initial draft of The Peace before he was transferred to the Eastern Front, as he feared its discovery by the secret police. This was prescient, as the Gestapo did indeed search his home in Kirchhorst before he left for the Caucasus.[3] 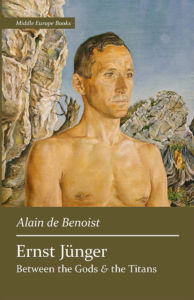 You can buy Alain de Benoist’s Ernst Jünger between the Gods and the Titans here.

In 1944, Jünger sent The Peace to members of the Stauffenberg plot, which was being orchestrated by Claus von Stauffenberg and other German officers in an attempt to assassinate Adolf Hitler. Like Jünger, the conspirators feared that Germany would be destroyed if Hitler remained in power and refused to capitulate. The plot failed. Upwards of 4,980 suspects and political enemies were executed by the National Socialists afterwards, but Hitler insisted that “[n]othing happens to Jünger.”[4] Instead, he was merely dismissed from the Wehrmacht. As John Morgan points out, The Peace was a “blueprint for a new post-war and post-Nazi order for Europe.”

Because the belligerent powers and so much of the world suffered as a result of the Second World War, Jünger believed that a collective reconciliation and peace was necessary to prevent future apocalyptic conflict on the European continent. Like the victor’s peace treaties following the Franco-Prussian War and the First World War, Jünger feared a similar conclusion to the Second World War — one that would let enmity fester and future wars proliferate. When considering the Treaty of Versailles, Jünger notes that

. . . unfortunately instead of leading to new ordered ways of life it increased the sources of conflict. It remained . . . an imperfect work and can hardly be said to have brought the war to a conclusion.[5]

Jünger takes the time throughout this short work to describe the amount of suffering endured by those caught in the war’s maelstrom. His own short introduction is a dedication to his son, who was also named Ernst, and who fell amidst the war’s violence: “This work is to be dedicated to my son, Ernst Jünger. . . he fell on the 29th of November 1944 at eighteen years for his homeland, in the Marble Mountains near Carrara.”[6] In his essay on Jünger, John Morgan notes that his son had been arrested and assigned to a Wehrmacht penal unit for “allegedly holding subversive talks.”

Such too was the fate of innumerable nameless men who clung to lost outposts until their hour of terror struck. The doomed member of the resistance faced the omnipotence of the executioner, and the way to the peaks of suffering had many stations. Particularly terrifying were the cold mechanics of persecution, the considered technique of decimation, the tracking and surveillance of the victims by means of the lists and files of a police force which swelled into armies. It seemed as if every method, every discovery of the human mind had been transformed into an instrument of oppression.[7]

This passage is reminiscent of Oswald Spengler’s image of the Roman soldier who remained at his post despite knowing that he is facing certain death:

Our duty is to hold on to the lost position, without hope, without rescue. To hold on like that Roman soldier whose bones were found in front of a door in Pompeii, who died because they forgot to relieve him when Vesuvius erupted. That is greatness . . .[8]

In his Preface to Man and Technics, Lars Holger Holm remarks that “. . . the soldier dying on duty, in a gesture of vain but unflinching steadfastness, is an image of personal, tragic fatalism.”[9] Jünger recognizes that although heroic, much like Spengler’s Roman soldier, the “innumerable nameless men” are today consumed by industrial warfare’s technological nihilism and the vast totalitarian surveillance state.

Jünger believed that all-powerful technology was the gateway to nihilism and must be constrained by a higher power. As Alain de Benoist has written:

In his journal, Jünger writes that after the First World War, the question was whether man or machine would prove the strongest. In Peace, he declares that technology must be subordinated to divine and human forces. Today the question remains: is it men or machines who will dominate the world?[10]

Moreover, Jünger was undoubtedly influenced by his ongoing correspondence and friendship with philosopher Martin Heidegger. The Peace features many references to Christianity and the cardinal necessity of religious or spiritual belief for Europe’s future. Jünger states that Europe needs metaphysical strengthening, adding that “if the struggle against nihilism is to succeed, it must be fought out in the heart of each one of us.”[11] He continues:

The modes and methods of technical thinking must not encroach where human happiness, love and well-being should flourish. The intellectual, the titanic powers must be separated from the human and the divine and subordinated to them.

This subordination would only be possible if “men strengthen themselves metaphysically in proportion to the growth of technical science.”[12]

Jünger also sets out his ideas in regard to the creation of a unified pan-European state as a means to alleviate the continent’s seemingly perpetual conflicts. He states that “Europe can become a fatherland, yet many homelands will remain within its territories.” He then goes on to explain that

It is significant to note that in Jünger’s formulation, a pan-European state would respect national identities rather than see them subsumed by miscegenation.

Rootless cosmopolitan Richard von Coudenhove-Kalergi, by contrast, believed the solution to Europe’s woes was to create a mixed-race population devoid of identity. The races of this union were to be blended in favour of a mixed race reminiscent of the ancient Egyptians:

The man of the future will be of mixed race. Today’s races and castes will gradually disappear owing to the vanishing of space, time, and prejudice. The Eurasian-Negroid race of the future, similar in its appearance to the Ancient Egyptians, will replace the diversity of peoples with a diversity of individuals.[14]

The Peace is a succinct convergence of Jünger’s ideas. Although it opposes both National Socialism and cosmopolitanism, it is still situated within the Conservative Revolutionary Right. It is an attempt to articulate a pan-European vision that unites the continent while respecting national sovereignty and tempering the nihilistic force of technology, and also aims to bring divinity back to a place of prominence. Although Germany was destroyed, humiliated, and remains subjugated in the post-Second World War dispensation, The Peace can perhaps serve as a key document that will hasten a process of renewal.