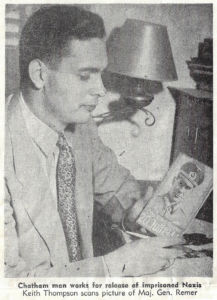 Charles Harold Keith Thompson Jr. (September 17, 1922 – March 3, 2002), more familiarly known as Keith Thompson, was Francis Parker Yockey’s primary US colleague. He was born in Orange, New Jersey of English, German, and Scottish descent. Dr. Hans Thomsen, Keith’s cousin, was the last German chargé d’affaires in Washington DC prior to World War II, and they worked closely together to keep the USA out of the war. At Drew College and Yale, Thompson expressed his opposition to the USA’s having fought in World War I and becoming involved in another war against Germany.

Having studied naval law at Yale, Thompson held posts in the Navy associated with legal matters. He served as an administrative officer on the USS Franklin D. Roosevelt in 1946, then on the USS Mount Olympus as part of the Antarctic expedition of Admiral Richard E. Byrd in 1947, after which he lectured to civilian groups on the Antarctic. That year he resigned from the Navy to accept a Marine Corps commission.

Appalled by the “war crimes” trials of “honorable soldiers,” Thompson began to work on individual cases from 1945, when he was still on active service. These included those of Baron Alexander von Falkenhausen, Reich governor of Belgium; Grand Admiral Dönitz; Generals Mannstein and Kesselring; and the 1945-1947 Dachau “Flyers Case.”  Thompson also cultivated contacts with the pro-Soviet Left, and these activities on Left and Right resulted in his vigorously contested court-martial in 1950. Among his supporting witnesses was Admiral Byrd.  He was honorably discharged after a notable service career.

In 1952, Thompson registered under US law as a foreign agent for the Socialist Reich Party, led by Major General Otto Remer and other war veterans. He began a campaign to support the party, which was being suppressed because of its growing electoral popularity and its neutralist position vis-à-vis the Cold War. He set up the Committee for International Justice, which had a tangible impact on lobbying for improved conditions at Spandau Prison, and the Committee for the Freedom of Major General Remer, who had been jailed for ‘neo-nazi’ activities.

Thompson had formed the American Voters Union in 1952 for the purpose of campaigning for the presidential nomination of Robert Taft by the Republican Party, and supported Senator Joseph McCarthy. In 1954 Thompson was appointed US correspondent for Der Weg, published by German émigrés in Peron’s Argentina. This gave Thompson press accreditation to the United Nations.

At this time Thompson met Yockey at an expensive, Jewish-owned luncheonette in New York in the company of Frederick Weiss. Yockey became what Thompson called his “dearest political friend and companion in many great ventures.” From then on Thompson provided “a steady outflow of money” for Yockey’s “various projects.”

In 1957 Thompson became of particular interest to the FBI, which closely monitored his whereabouts and his correspondence. The FBI was concerned with whether (1) Whether Thompson should be registered as a foreign agent because of his work for Der Weg, and (2) his soliciting of views on the “war crimes trials” and on the fate of Dönitz in particular, from military, legal and other eminent people.

When Dönitz was released from Spandau Prison in 1956, Thompson organized an international campaign that succeeded in getting him full pension rights as a veteran. The success of the campaign reflected Thompson’s wide contacts with influential people. The correspondence connected with the campaign was published as a book in 1976, Dönitz at Nuremberg: A Reappraisal. The letters had been presented as an album to Dönitz on his release.

Thompson was a literary agent whose clientele included many notable characters, such as Cuban dictator Fulgencio Batista, to whose regime Thompson had helped supply guns. Another client was Marguerite Oswald, mother of Lee Harvey Oswald.

During the early 1960s, Thompson was threatened by a Mossad agent, who soon afterward disappeared. In the 1970s Thompson served as a mercenary in Rhodesia under the alias Brigadier Paul D. North. This activity made him a target for a Black militant group called Black Avengers.

Thompson had collaborated with Yockey on various literary projects while Yockey had assisted with Thompson’s justice committees in writing to the State Department.  The various publications put out by Weiss’s Le Blanc Publications, under the pseudonym ‘X.Y.Z’, are likely to have been joint efforts between Yockey, Thompson, and Weiss, or some combination thereof. In 1960 Thompson had collaborated with Yockey on the “The World in Flames: An Estimate of the World Situation,” analyzing the Cold War era and the role of the “Third World.” Thompson commented to Bolton that he had persuaded Yockey to add commentary on the neutralist regimes to reinforce the point “that the world is turning against the USA.” The essay appeared posthumously in 1961, Thompson having seen “that work through from his [Yockey’s] rough manuscript to the printed production.”

After a long period behind the scenes, in September 1982 Thompson addressed a convention of the Institute for Historical Review. The FBI took a renewed interest in Thompson in 1984 in regard to his passport status.  Under would-be Yockey biographer Keith Stimley’s editorship, Thompson contributed book reviews to the Journal of Historical Review. He arranged for the appearance of Remer at the Eighth International Revisionist Conference in 1987. When Remer died ten years later, Thompson wrote on “the loss of this old friend, with whom I had so many shared experiences,” and that “we cannot permit either Remer or Yockey to become forgotten as long as we can do something about it.”

In the last few years before his death on March 3, 2002, Thompson became a notable donor to conservative elements of the Republican Party, including Oliver North, Jesse Helms, David Duke, and Patrick Buchanan, at a time when there was an ideological civil war in the party between paleoconservatives (heirs of Robert Taft) and neoconservatives (heirs of Leon Trotsky). He was awarded membership in the party’s Presidential Legion of Merit.

« The Counter-Currents 2022 Fundraiser
In My Grandiose Moments