The Conservative Way of Accepting Dispossession 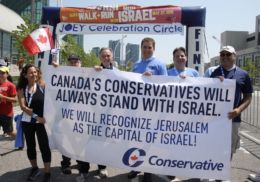 Canadian conservatives are a sad lot. They live in one of the most pozzed countries in the West — if not the most pozzed. Canada’s rulers aim to set new records for immigration every year, leading to the Great White North now accepting over 430,000 immigrants on an annual basis. That’s one of the highest immigration rates per capita in the world, and it’s sure to increase Canada’s already high portion of foreign-born residents (it currently stands at 21.5%).

It’s also ranked as the gay-friendliest country in the world. Canada’s government imposed draconian COVID restrictions and severely punished those who dared resist them. The nation pushed new gun control laws in response to mass shootings in another country. It has not one, but two federal holidays to apologize to the “Indigenuous.” Its three main parties all compete to be the most pro-immigrant, the most pro-gay, and the most anti-racist.

For Canadians who lean right, the options are pretty grim. But the nation still has a conservative media that tries to come to terms with the new changes. It’s necessary find reasons to be a proud Canadian. It requires the Canuck Cuck to submit to the new regime while retaining plenty of energy to quibble over minor details. They don’t disagree on the fundamentals with liberals. They still think it’s necessary for Old Stock Canadians to bring in hordes of third-worlders and regularly apologize to Indians. They’d just like to do it in a more moderate manner.

A great example of the Canuck Cuck mindset comes from Toronto Sun columnist Lorne Gunter. Gunter is peeved that some of his countrymen would like to rename Canada Day to “New Day.” He’s particularly mad that the site of Manitoba’s largest Canada Day celebration is calling this patriotic holiday the unimaginatively banal “New Day.” The new festivities won’t be devoted to fireworks and bands, either. Instead, good citizens who attend the July 1st events at the Forks in Winnipeg will witness a “day devoted to reflection, inclusion, and ‘fun for everyone.’”

Gunter makes sure to get in his kicks at the politicians who are scheduled to speak there, because what good conservative columnist wouldn’t let his audience know that he hates politicians just like ordinary folks? Railing against politicians is the easiest form of performative populism, which makes it popular among the most basic of conservatives.

He then boldly stands up for the little guy who wants the traditional Canada Day back — while offering concessions to the new dogmas:

But what if you’re proud of Canada, warts and all? What if you want to blow off a little midsummer’s steam and rejoice in what this country has done right while also acknowledging (but not dwelling on) things it may have done wrong?

What if your idea of inclusion is trying to craft a festival that will showcase the contribution of many cultures to the Canadian nation, and help us all understand and respect one another by having fun together, rather than an event that sounds like the equivalent of donning a hairshirt and subjecting yourself to purifying flagellation?

And what if, in the process of cancelling Canada Day, organizers alienate people who are proud of the country and like the annual celebration? Don’t those people deserve to be included in the official inclusiveness, too?

The argument: The best way to celebrate Canada as an anti-racist, multilcultural, and tolerant place is to keep Canada Day. He’s fine with turning this patriotic holiday into another celebration of pozzed Canada; he just wants it to remain Canada Day. He insists the country needs to acknowledge its wrongs; it merely needs holidays that include the people who founded the country. Isn’t that nice . . .

Gunter is totally fine with Canada’s new holidays dedicated to national guilt and Indian moral superiority: National Indigenous Peoples’ Day and National Day for Truth and Reconciliation. His only qualm with either holiday is that Justin Trudeau didn’t properly honor the latter one. Gunter jokes that Trudeau calls the National Day for Truth and Reconciliation “National Surfin’ in Tofino Day.” This references the Prime Minister being pictured at the beach on the somber day last year. The joke itself demonstrates the cuckservative zeal for engaging in petty partisanship against their political opponents while agreeing with their foes on the big picture.

Their sole guiding principle is to mock liberals like Trudeau, even if it requires one to accept liberal positions. The proper conservative stance would be to attack the whole idea of an anti-white holiday like the National Day for Truth and Reconciliation, which upholds the libel that Canada massacred Indian kids in residential schools. But Gunter chooses to embrace the holiday and attacks Trudeau for surfing.

Gunter buys into the libel surrounding residential schools; he simply wants the guilt trips to take a backseat on Canada Day and rather be the focus on the two specifically anti-white days. “Those two commemorations are much better suited to reflection and contemplation on such issues as how to overcome the still very real fallout from the residential school system,” he writes.

What should the meaning of Canada Day be? “I believe Canada Day would be more useful if it showed us how to have fun together, how to enjoy each others’ company, to share a country as one and have a good time doing it,” he tells us. How inspiring to be united by the pursuit of fun.

He goes on to say that “[we] need always to work at ensuring fairness, equality and justice for everyone.” It’s just that renaming Canada Day is the wrong way to go about it.

Gunter really does embody the Canuck Cuck. His other articles are fiery polemics about government spending and fiscal matters. There’s no concessions offered to progress there. But when it comes to fundamental matters, it’s just quibbling over semantics. The core issues aren’t challenged; he just quibbles over whether it’s appropriate to surf on anti-white holidays.

It’s no wonder that the Conservative Party of Canada is about as Left-wing as the Democratic Party in the United States. Besides the People’s Party, which doesn’t have any representation in parliament, there is no real political opposition in the Great White North. It’s a competition between enthusiastic acceptance of dispossession and grudging acceptance of dispossession.

Gunter’s column is not just a representation of Canadian conservatism. You see the same pablum from American conservatives. Many American conservatives rejoiced over making Juneteenth a federal holiday, even though the holiday’s purpose is to browbeat whites into forking over reparations. It also may one day displace July 4th in importance. None of that matters to the cuck. They just see it as a day to celebrate America’s progress and its commitment to equality.

American conservatives fiercely claim Martin Luther King as their own and deride Democrats as the real racists. They match liberal fervor in their belief that America is a nation of immigrants and fawn over the supposed superiority of the new arrivals. They also acknowledge America’s sins of racism and bigotry; they just don’t want the primary patriotic holidays to focus entirely on them. They of course don’t agree with liberals on everything, however. Conservative media wouldn’t exist if that were the case. But on most of the big issues, the conservative commentariat is on the same page as liberals. They just wish that some people would stop attacking America, that “wokeness” is kept out of sports and entertainment, and that Joe Biden admits he is senile.

The big difference between Canadian and American conservatism is that major figures stateside don’t stick to the respectable path. Donald Trump won the presidency on a platform that appealed to white identity politics. Tucker Carlson, the number one cable news host, regularly discusses the Great Replacement and anti-white racism. Ordinary parents have waged a crusade against Critical Race Theory in their schools. Conservative Inc. would be happy to be more like the Canuck Cucks, but the people they allegedly represent would not be happy with it. And the people have the power to demand a stronger, more authentic Right-wing movement. They’re not content with a movement that will merely plead for the right to have fun on July 4th. They want a movement that will take back their country. Not every conservative agrees with that in the states, but they have to acknowledge it.

After Trump, they can’t be complete cucks without paying a price.

Gunter’s article reminds us that things could be much worse for us Americans. We could be Canadians.