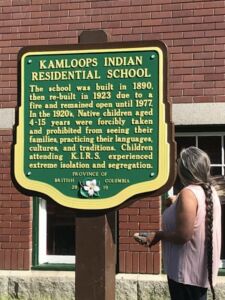 Like the rest of the West, Canada has been lurching from one supposed crisis of white racism to another, but this country’s specialty remains aboriginal victimology. The most recent hysteria flared up in June with “discoveries” of “mass graves” outside former church-run residential schools for natives. The furor triggered predictably sanctimonious outrage, cancellation of many July 1st Canada Day celebrations, arson attacks that destroyed several dozen churches, and international condemnation of a Canadian disgrace supposedly on par with the world’s worst atrocities.

But these aren’t “discoveries.” The existence of the unmarked graves has been publicly known since the time of burial. They weren’t “mass graves” either, but individual plots, or sometimes a niggardly cost-saving two to a plot. Deaths were caused by epidemics like TB or flu, or by individual illnesses. Some of the deceased were teachers or non-natives from the local communities.

In some cases, the lack of grave markers attests to the cheapness of school administrators. In other cases, grave markers went missing as natives allowed the cemeteries on their land to fall into neglect.

Nevertheless, beginning with a dramatic announcement by a white archeologist in June, the “discoveries” pushed native emotional rhetoric to an all-time high. That means yet more guilt dumped on whites and yet more empowerment bestowed on what are, theoretically, Canada’s two most powerful ethnic groups: the Inuit and the people once called Indians. (We don’t have a suitable term for the latter group.)

Even before the grave hysteria, the former boarding schools had been portrayed as relentlessly cruel, racist institutions that left natives emotionally scarred whether they attended the schools or not. Not all of them did, even in the schools’ heyday. The last one shut down in 1996.

A closer look at some specific allegations suggests a type of discipline that wasn’t uncommon in contemporary Canadian schools for working-class whites. Kids could experience verbal abuse, corporal punishment and light, random violence like shoving, kicks, and slaps. More serious violence would sometimes occur, as lower-class whites also experienced. Sexual abuse did happen in certain residential schools at certain times, but its extent has been clouded by dubious allegations that can draw hefty payouts.

There have been some native defenders of the schools, but their viewpoint is now considered blasphemous.

Even if the schools were far from ideal, could they actually explain all native dysfunction? The more important question is whether natives can get over it — or whether they want to.

Over the last few decades natives have risen to the top of Canada’s hierarchy of special interests, but not through their own efforts. Undefined — and therefore almost unlimited — special rights have been bestowed on them by politicians and courts, to the delight of Canada’s establishment. Native benefits include innumerable entitlements, a considerable degree of immunity from criminal law, and vague claims on almost all Canadian territory.

A major development, and one tied to residential schools, came with the 2015 report of Canada’s Truth and Reconciliation Commission. Its manifesto declares the residential school system guilty of “cultural genocide,” which supposedly explains all native dysfunction. The commission demands special recognition and entitlement for natives in virtually all aspects of society, not limited to justice, education, health care, culture, and the economy. This constitutes a sort of native-specializing Gleichschaltung in addition to the general Gleichschaltung of the Western world, in which absolutely all aspects of society have to fall in line with political correctness.

The verdict of “cultural genocide” is normally cited in public discourse simply as “genocide.” According to conventional Canadian thinking, all natives are victims of genocide.

The line of thought also implies that prior to European contact natives lived in a Rousseauian utopia of primitive innocence. Not acknowledged is native responsibility for environmental degradation, extinction of species, torture, slavery, ongoing warfare, geronticide, genocide (the real kind), and female infanticide. Up to the mid-1920s, some Inuit bands were killing half of their baby girls at birth.

That might put a different perspective on residential schools as an effort to integrate natives. Doing so required bringing them out of the Paleolithic Era. Unlike their counterparts in some parts of present-day United States and especially central and South America, Canadian aboriginals had virtually no advancement beyond hunting and gathering. After European contact, they simply adapted horses, guns, and later technological advancements to their foraging lifestyle. Government handouts eventually became natives’ main source of sustenance.

Like residential schools, efforts to encourage agriculture, stock raising, herding, occupational trades, and native-run businesses failed. Native-owned businesses of any significant size that do achieve success have usually been purchased with resource royalties, then placed under non-native management and staff.

Natives have had some middling job success in the mining industry, their largest private-sector employer. Mining companies desperately need aboriginal support to avoid the “native veto” that blocks government approval of any resource or infrastructure proposal. So companies practice preferential hiring and simplify training. Despite those advantages, natives don’t rise above the level of semi-skilled jobs anywhere in the industry.

Then there are all those native lawyers. Canadian universities have been churning them out for decades under a simplified native-only curriculum with free tuition and often a salary for attending. But few actually practice law. Non-native lawyers, almost always white, represent native individuals and tribes in court, in everything from criminal defense to land claims, to constitutional challenges. Non-native, usually white, anthropologists, archeologists, linguists, and other academics provide supporting testimony. White activist judges almost consistently rule on behalf of natives.

Native spokespeople, meanwhile, present an unedifying spectacle. Benighted as Canadian public discourse is, native leaders stand out as especially inarticulate. If they have a specialty besides simplistic guilt-mongering and childish demands, it’s talking at great length without making a point or coming to a conclusion.

Non-natives (again, not necessarily whites) familiar with aboriginals refer guardedly to their almost astonishing lack of temperance, prudence, initiative, responsibility, and maybe most significantly, shame. A few generations ago, Canadians commonly believed that most natives failed to mature beyond early adolescence.

An ideal opportunity to demonstrate native self-responsibility came with Ottawa’s 1999 creation of Nunavut. The 811,000-square-mile political territory was intended to be an almost totally sovereign racial jurisdiction — in other words an ethnostate.

But Nunavut aboriginals function at the very bottom of their own country. Their economy runs almost entirely on federal government handouts, with some mining royalties thrown in. Almost all responsible jobs are held by non-natives, many of them short-term residents from the south. All the dysfunction typified in southern native communities plays out here on a larger scale. In Nunavut’s capital city of Iqaluit, Muslim immigrants run a food bank for the Inuit.

As is often the case with southern natives, the Inuit will say they want to return to their traditional lifestyle. But aiding all that hunting and gathering would be modern vehicles and weapons, fuel, electricity, infrastructure, imported food — the list goes on and, of course, includes a handy post-Stone Age gizmo called the wheel.

Also inhibiting a true return to Paleolithic times would be the Malthusian quandary of welfare families too large for a primitive economy to support. This Stone Age would have to retain government handouts, unless the Inuit want to resume killing their baby girls.

So what might natives do besides collect handouts and affirmative action sinecures? With the extraordinary rights and privileges granted to them, they have the power to shut down the country. Distinctly native political tactics (outside of white-run initiatives in courtrooms and Parliament) consist of blockades and sit-ins.

(Consider for a moment how ethnic political action parallels ethnic lifestyles: Jews exert power through political, media, and financial influence; blacks use violence, looting, and destruction; natives hang around and do nothing.)

Natives get away with blocking roads, highways, and railways due to aboriginals’ relative immunity to criminal law and to widespread media sympathy. These blockades have so far occurred only on a local level. Yet there’s nothing to stop natives from doing that on a nationwide basis.

Nothing, maybe, but lack of initiative.

That brings to mind the immediate society-wide response to the Minneapolis martyrdom, with everyone from antifa to big business quickly demonstrating support for BLM. It’s easy to imagine that a well-organized network of mostly white activists had a strategy ready for just such an opportunity.

White Canadians who want to destroy the West often masquerade as environmentalists. They’ll also piggyback on native issues. As their influence has grown, white activists may have developed a sophisticated network ready to execute a nationwide strategy. Whites could use one or another aboriginal incident to trigger nationwide native blockades.

Sure, whites could mount blockades on their own, but they’d eventually face the rule of law. Natives wouldn’t.

Natives don’t necessarily need whites to carry this out, but the events seem more likely with behind-the-scenes white encouragement and organization.

Of course, the result would be a chaotic breakdown of transportation, infrastructure, critical supply lines, health care, commerce, law, and pretty well everything else. In the short term, that would delight activists who hate normality and exalt in its destruction.

But if the chaos lasted too long, extraordinary measures would be necessary to override natives’ relative legal immunity. That might require an authoritarian or totalitarian regime that imposes its repression on everyone.

That seems to be the West’s fate anyway. This is one scenario that could bring it about in Canada.

Wayne Northrup is a pen name for the author of You Can’t Say That, a racial dystopia set in Canada.

« How the West Was Won

» Red Feds & Undercover Commies: A Look at I Was a Communist for the FBI & I Led Three Lives