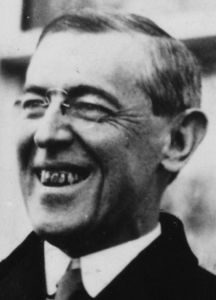 Nearly two years ago, your humble writer noted that Woodrow Wilson is one of the most hated presidents of all time. Older readers may recall a time when liberals loved the 28th President. They saw him as a progressive visionary who spread democratic values across the globe and made America better. Now, they just see him as another white supremacist who should be denied all public honors.

This is joyous news to conservatives. Movement conservatives have long detested Wilson for his “big government” philosophy. They see an opening to bury their long-hated foe through the recent liberal animosity. Conservatives are thrilled they can now win liberals over with appeals to their own biases. The issue is that conservatives hate Wilson for the same reasons liberals do. Rather than undermining their enemies’ notions, conservatives submit to them. No one cares about Wilson’s tax policy; they only care about his views on blacks.

This is evident in National Review writer Dan McLaughlin’s recent article, “The Hater’s Guide to Woodrow Wilson.” He writes:

I come now not to explain Wilson, but to hate him. A national consensus on hating Wilson is long overdue. It is the patriotic duty of every decent American. While conservatives have particular reasons to detest Wilson, and all his works, and all his empty promises, there is more than enough in his record for moderates, liberals, progressives, libertarians, and socialists to join us in this great and unifying cause . . . Wilson was a human pile of flaming trash. He was a bad man who made the country and the world worse. His name should be an obscenity, his image an effigy. Hating him is a wholesome obligation of citizenship.

And what is causing Wilson to be the recipient of all this bile? At the top of McLaughlin’s list is not the President’s support for expanded government or moralistic foreign policy; it’s that Wilson was a racist and a eugenicist:

[T]he Virginian Wilson ordered the resegregation of the entire federal government. He required photographs on job applications to screen out black people. The Army under Wilson was so segregated that some black units fought under French command in the largest battle of the First World War. (Naturally, black men who were banned from being hired for peacetime federal jobs were still subjected to the draft.) When you read about Harry Truman’s courageous desegregation of the Army, remember whose work he was undoing. Wilson screened the pro–Ku Klux Klan film Birth of a Nation at the White House; the film quoted pro-Klan passages from one of Wilson’s books. He backed legislation making interracial marriage a felony in the District of Columbia.

McLaughlin positively cites a liberal writer calling Wilson “extremely racist — even by the standards of his time.” The conservative writer adds that Wilson was “too racist for Imperial Japan.” He goes on for several paragraphs to list Wilson’s sins against current racial dogma, ranging from being allies with segregationist politicians to segregating Princeton. McLaughlin also attacks Wilson for being xenophobic about unassimilated immigrants and for signing eugenics bills into law as the Governor of New Jersey. The writer even tries to claim that Wilson was an anti-Semite because he appointed his first Attorney General, James McReynolds, to the Supreme Court alongside a Jew he had also appointed, Louis Brandeis. McReynolds refused to speak to Brandeis for years and would even leave the room when Brandeis spoke; this is all allegedly Wilson’s responsibility. Any argument will be used to bring down the much-hated Wilson.

The focus on Wilson’s racism takes up most of the article. The other reasons for why you should hate Wilson consist of only a few paragraphs. The section on Wilson implementing the income tax is just three short sentences long. The only section that nearly equals the length of the racism section is the one on Wilson’s civil liberties record. One of the things McLaughlin bemoans is that Wilson’s third Attorney General, Mitchell Palmer, arrested and deported Communists. How terrible!

There are legitimate reasons to dislike Wilson. He came up with the idea of the League of Nations, which was an early forerunner of Globohomo. He believed America should spread liberal democracy all over the world. He created the Federal Reserve. Wilson got us into the catastrophe that was the First World War. He supported Prohibition. His arrogance and moral self-righteousness would fit right in with that of our contemporary liberal elites, as would his zeal for using government to serve progressive ends.

Traditional conservatives could make a case that Wilson’s activist view of government put America on the wrong path, making our country less free and more heavily taxed. Even those nationalists who like the idea of big government would take that argument seriously.

But these all are secondary to deriding Wilson as a racist. The primary attack against Wilson by the mainstream Right is the same as the mainstream Left’s. There is differentiation in the margins, but the ultimate argument is the same. Rather than persuade independent readers to question Wilson on classic conservative grounds, it cajoles them into hating a long-dead President for failing to uphold twenty-first century racial beliefs. It’s a capitulation to the Left.

Whether one hates Wilson or not is beside the point. He’s just one among a lengthy list of notable Americans we can no longer honor — and it’s all because he was a white man who recognized racial reality. This is no moment to cheer, even if you see the Virginian as the first globalist or as an enemy of Europe. It is just another chance to tear down America’s white heritage. For all his faults, that’s what Wilson represents.

As I wrote in my last article on Wilson, we should have some understanding of the man. He was not as bad as Franklin Roosevelt or Lyndon Johnson, at least. He believed America was founded by Northern Europeans and that it should be maintained as a white man’s country. While not an ardent immigration restrictionist like Madison Grant and others, he did believe our immigration policy should keep non-whites out; he was generally more welcoming to Eastern and Southern Europeans than Grant, however. His foreign policy outlook, which demanded that each people in Europe would get a nation of its own, is superior to what is now espoused by the American government, namely that no European people deserves a nation of its own and that all must share theirs with Third World immigrants.

Nationalists might still dislike Wilson, but there are far worse figures in American history — and after all, he was a race realist.

The conservative attacks on him are no longer edgy or original. McLaughlin intended his piece as a gleeful bit of iconoclasm, complete with the nastiest rhetoric allowed in the equivalent of a G-rated movie. The writer definitely imagined some strawman liberal spitting out his coffee while reading it. But that liberal no longer exists. The piece engaged in no actual iconoclasm. Wilson has already been dethroned; McLaughlin was just spitting on an already officially despised figure. It was as edgy as a verbose screed against Benito Mussolini. You’re told to hate Mussolini from the moment you develop the ability to understand language; no one is shocked by harsh opinions against him. Wilson may not yet be in the same category as Mussolini, but he’s close, given that the reasons for hating him are more relevant to today’s political conflicts than those for hating Mussolini. The defenestration of the 28th President is all part of the war on America’s white heritage.

Conservatives deserve no credit for wanting to bury Wilson. The liberal elite already did the job for them.