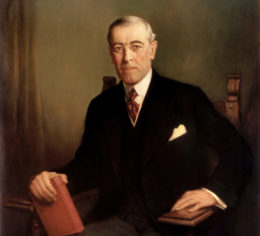 Woodrow Wilson once stood as a hero to modern progressives. The 28th president’s moral idealism, disregard for constitutional fealty, and belief in the goodness of “big government” endeared him to liberals of the Barack Obama era. Commentators positively noted the similarities between Wilson and Obama — both were professors, both were self-professed intellectuals, both allegedly put principles over petty politics, etc.

Now Woodrow Wilson is officially canceled. Princeton’s prestigious Woodrow Wilson School of Public Policy and International Relations announced it was dropping the president from its name.

“Princeton is part of an America that has too often disregarded, ignored, and turned a blind eye to racism, allowing the persistence of systems that discriminate against black people,” Princeton University President Christopher Eisgruber said in an op-ed explaining his decision. “Our commitment to eliminate racism must be unequivocal, and that is why we removed the name of Princeton’s modern-day founder from its School of Public and International Affairs.”

Eisgruber described Wilson as a racist. “He discouraged black applicants from applying to Princeton,” he wrote in the op-ed. “While president of the United States, Wilson segregated the previously integrated federal civil service, thereby moving the United States backward in its quest for racial justice and contributing to the systemic racism that continues to damage black lives and our country today.”

Just a few years ago, Eisgruber defended Wilson for turning Princeton into the world-class university it is today. Now the former Princeton president Wilson is only fit for history’s dustbin.

The move was celebrated by many conservatives. Wilson has long served as the dreaded visage of liberal fascism to the American Right. Jonah Goldberg put Wilson at the top of his American villains in his awful book, Liberal Fascism. Glenn Beck said “I hate Woodrow Wilson with everything in me,” and put Wilson at the center of all of his big-government conspiracies. Conservatives generally hate Wilson for expanding the size of government and disregarding a strict interpretation of the Constitution.

But conservatives also like to bash Wilson for the same reasons liberals do.

“Wilson was one of the most despicable characters in 20th-century American politics: a national embarrassment,” National Review writer David Harsanyi said in an op-ed celebrating Wilson’s cancellation. “The Virginian didn’t merely hold racist ‘views’; he re-segregated the federal civil service. He didn’t merely involve the United States in a disastrous war in Europe after promising not to do so; he threw political opponents and anti-war activists into prison. Wilson, the first president to show open contempt for the Constitution and the Founding, was a vainglorious man unworthy of honor.”

Harsanyi said that Warren G. Harding, a complete mediocrity of a president, should replace Wilson in all public honors.

Wilson’s toppling is nothing to cheer about. His removal signals the end for all dead white men. It also highlights the good aspects of the Virginian intellectual. Wilson was a bit too idealistic about democracy and the League of Nations was a terrible idea. But he was a man who saw America as a white nation that should proudly stand up for its racial identity.

He wanted our immigration policy to ensure America remained a white man’s country.  “We cannot make a homogeneous population out of people who do not blend with the Caucasian race. . . Oriental coolieism will give us another race problem to solve, and surely we have had our lesson,” he said in 1912 in support of Asian exclusion laws.

Liberals and conservatives castigate Wilson for segregating the federal civil service and reducing black opportunities in government. The move was intended that the government of a white nation remained white. “Long ago we determined that the Negro never should be our master,” said Wilson’s Assistant Secretary of the Treasury John Skelton Williams. Wilson himself supported segregation because he felt the races could not get along if they shared the same spaces. “We know that there is a point at which there is apt to be friction, and that is in the intercourse between the two races,” he told a black delegation in 1914.

While he wanted the world to embrace liberal democracy, he did not hold the neocon illusion that an American lives inside every person in the world. He opposed racial equality on the global stage, striking down Japan’s demand that a racial equality clause be included in the League of Nations charter. The president thought this would send the wrong message to non-white nations.

Wilson championed eugenics and supported laws that would sterilize career criminals and the mentally disabled.

He was also a proud Southerner who helped popularize Birth of a Nation and honored the Confederacy. He hosted screenings of Birth at the White House. “It’s like writing history with lightning. My only regret is that it is all so terribly true,” Wilson said of the epic film. The film, of course, attacks Reconstruction as an oppressive regime imposed on white southerners by corrupt Northerners and their dastardly black allies. Birth lionizes white resistance to Reconstruction and incorporated quotes from Wilson’s popular A History of the American People.

Wilson wrote in that book: “The white men of the South were aroused by the mere instinct of self-preservation to rid themselves, by fair means or foul, of the intolerable burden of governments sustained by the votes of ignorant negroes and conducted in the interest of adventurers.” Wilson wrote in his younger years that “the determination of the Saxon race of the South that the negro race shall never again rule over them is, then, not unnatural and it is necessarily unalterable,” he said. He concluded that whites must maintain a “united resistance to the domination of an ignorant race.”

He praised the North and South reconciling after the Civil War on behalf of their shared Anglo identity and blood, saying this commonality led to the united America of the World War I era. He argued this nation was founded by “men of the sturdy stocks of the North of Europe” and lamented the “sordid” effect of alien populations.

Wilson’s progressivism was motivated by the desire to challenge corporate power on behalf of the common man. It was an ideology that wanted to use state power to push against the power of monopolies and selfish tycoons. It imagined Americans as a homogenous people with an agreed-upon common good. It was not the corporate-backed extortion scheme of modern racial grievance movements.

Wilson also appointed one of the most racially conscious justices in American history to the Supreme Court: James McReynolds. His last attorney general was Mitchell Palmer, a staunch anti-communist who led the Palmer Raids against foreign radicals and domestic subverters. The raids resulted in the deportation of hundreds of foreign leftists.

Wilson may not be a Dissident hero, and there are certainly problems with him. Wilson’s idealism led him to espouse some of the goofiest platitudes of liberalism, but he wasn’t as depraved as modern liberals. He understood race and saw America as a nation created by whites and for whites.

For those sins alone, he must be canceled.

» The Birds Or: Everything You Always Wanted to Know About Coronavirus (But Were Afraid to Ask Hitchcock & Heidegger), Part Seven