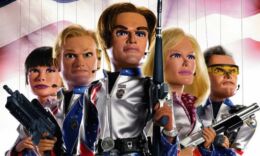 Why does America seem hellbent on bankrupting itself to “fix” other countries when the United States itself is irretrievably broken?

This nation is so inept that on the day after the Taliban seized control of Kabul, I had to stare at a dozen flabby black asses as I stood in line at a slow-moving post office entirely staffed by black government workers to send a certified letter to the IRS asking them why they have yet to respond to the tax return I sent them via certified mail last year.

Dozens of attempts to contact the IRS via telephone over the past year at first yielded a voice message saying that the IRS was currently too overwhelmed to handle phone calls—after which the IRS would automatically hang up on me—which has recently been supplanted by a byzantine maze of a robotic woman’s voice asking me to make selections that have nothing to do with my inquiry, at which point, a dozen beeps deep into the maze, I wind up hanging up on the IRS.

According to my tax returns, I owed the IRS $8,581—and for what? Exactly what do I get in return for all that money? But they never responded to my filing.

Then, this spring, they sent me a “refund” check for the same tax year to the tune of $9,017.77. There was no accompanying documentation, just the check. I was tempted to cash it but feared it might be some kind of setup designed to jail me, so I simply held onto the check.

So my certified letter the other day contained a gentle inquiry as to why they’ve never responded to my tax return, why they sent me a refund check when I owed them money, and a good-faith bank check to the tune of $5,000 just to stave off whatever interest has accrued simply because government workers are such hopeless bunglers that they can’t even handle a simple tax return.

And again — what do I get in return for that $5,000 except a half-assed promise that they won’t jail me for tax evasion?

The estimated combined cost of the wars of empire in the Middle East and Asia since 2001 is $6.4 trillion — and that’s from two years ago and doesn’t include future interest as well as the medical and psychiatric costs for veterans. Nor does it include the costs to the average taxpayer for housing, feeding, treating, coddling, and giving foot rubs to the endless refugees who will be welcomed home here like missing family dogs.

As of this writing, the official US debt — which doesn’t even include unfunded Social Security and pension liabilities — is $28.6 trillion. So at $6.4 trillion, the unnecessary wars in Iraq, Afghanistan, and a smattering of meddlesome forays into Asia account for nearly a quarter of the total public debt.

But we lost both the Afghanistan and Iraq wars. The only people who benefited were government workers and private defense contractors. In Afghanistan, that “Graveyard of Empires,” the US spent more than it did to rebuild Europe after World War II — and again, for what?

Why were we trying to teach the Stone Age Muslims of Afghanistan that American values are superior when in modern America, we teach that America was founded on corrupt racist values and that Islamophobia is a sin? Why were we wagging our anti-terrorist fingers at an ancient civilization 7,000 miles from DC when in DC, they’re now teaching that the biggest looming terrorist threats to modern America are the white-male descendants of the irredeemable racists who allegedly stole this land?

To teach those primitive camel-fuckers that it’s wrong to kill the 2,605 Americans who lost their lives on 9/11, we went over there and lost nearly three times as many American soldiers.

That’s not counting the 50,000 or so American soldiers who came back maimed and crippled.

It doesn’t count the 70,000 or so Americans who died every year from 2017 to 2019 from drug overdoses, nor the estimated 90,000 who died last year from ODs, much of it enabled by the fact that Afghanistan is the world’s largest exporter of heroin, and if there was one thing the Taliban was good at besides humiliating the world’s largest military, it was shutting down the poppy fields.

And it certainly doesn’t count the scarred psyches of the ticking PTSD timebombs who’ve returned home and now live among us whose trauma is immeasurably amplified by the realization that they risked life, limb, and their minds for what turned out to be a losing cause.

They’ve returned to a country that is in drastically worse shape than it was 20 years ago. The public debt is now nearly nine times what it was on September 11, 2001. Social media has driven average Americans into such a politi-tarded feeding frenzy that families can’t even have Thanksgiving dinner together anymore lest someone get shanked by the carving knife because a political argument got too heated. We’re on the verge of a multidimensional Civil War that will be fought along racial, ideological, and regional lines.

While we were busy trying to “fix” foreign nations that never asked to be fixed, conditions here got so bad that they are probably beyond fixing.

One of the biggest inanities of the supremely inane year of 2020 was the whole “Defund the Police” movement. It was argued, with no experiential evidence cited, that crime would plummet and black lives would be saved if we merely diverted funds earmarked for law enforcement to social welfare, housing, education, healthcare, and roads. Well, in the year 2018, those things ate up 70% of state and local spending, whereas the combined cost of policing, corrections, and courts only accounted for 7.7%. But they argued that the solution was to throw even more money at the problem. My suspicion all along was that the myopic focus on alleged “racist police brutality” was merely a ruse to supplant local and state policing with a federal police force.

Combined estimated total spending for 2018 for state, local, and federal policing and corrections was around $300 billion.

That is far less than half of the US military budget for 2018 — and what did we get in return for it besides more death, debt, and failure?

I’ve said for decades now that the only real military threat to the United States, at least in traditional terms, has been the porous Southern border. That constitutes a legitimate invasion — far more than the occasional terrorist attacks from Middle Eastern countries in whose politics the US has meddled for decades.

In 2018, the Pentagon spent $72 million in what can only be deemed as a symbolic gesture to pretend it cares about the influx of illegal immigrants at the Southern border. That was a mere one-thousandth of its military budget.

America needs to slash the federal military budget, send what troops remain to the Southern border, let the states and cities keep funding their own police, and keep its beak the fuck out of the world’s business.