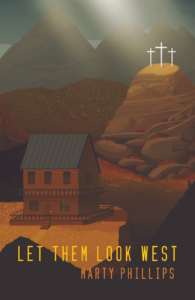 Economics. Christian theology. State-level politics. Journalism. Wyoming History. One will learn a lot about each of these topics when reading Let Them Look West by Marty Phillips. But the novel is so much more than all this. And like many great novels, you don’t realize how much more it is until the punch-in-the-gut ending. Not only does this novel’s ending inspire some desperate page-turning, it will also stick with you indefinitely.

There is so much of this novel I would like to discuss and so little I wish to give away. So reviewing it will be a bit dicey. What I can share is a meta-analysis of the plot. Rob Coen, a middling Jewish journalist for an East Coast cosmopolitan newspaper, travels to Wyoming to research an article on the state’s charismatic Christian governor James Alexander. Essentially, we have an agent of progress who descends from his skyscraper perch and braves an isolated, tumbleweed region of the empire where the heart of anti-progress still defiantly beats. Everyone is civil, friendly even. But the cosmological differences between Rob and the people he encounters are vast enough to be measured in millennia rather than decades.

This premise is so pregnant with thematic conflict that action suffers, yet the story keeps its edge on every page. It does this through deft pacing, the author’s voluminous research, and near-constant dialogue of uncanny acumen. Let Them Look West requires suspending disbelief regarding the plethora of conservative genius Rob encounters in Wyoming. Almost every person from the governor on down brilliantly conveys aspects of traditionalism, fundamentalism, and conservatism which completely escape Rob and his nabob employers back east. This is one of the chattiest novels I have ever read — it approaches My Dinner with Andre levels of dialogue — and yet the tension never ceases to build.

Rob seems to have absorbed all the materialistic cynicism of his racially diverse and morally smug milieu, where the creaking machinery of the Enlightenment is becoming less C3PO and more Terminator every day. He’s “suspicious of a decent world” and finds that among men “hypocrisy is the only constant.” Yes, he feels guilty and uncomfortable in the presence of his true-believing Wyoming hosts. Beyond this, however, he is a cipher, a high-verbal-IQ mouthpiece for a system that strives to make men like James Alexander obsolete. Yet he’s neurotic and self-effacing enough to be believable — and perhaps even enough for Leftist readers to view him as the story’s hero. Basically, Rob does not like Alexander or what he stands for, and knows from the onset that if he can ruin the man, he will.

But what makes James Alexander worth ruining? If his ideas are so shabby and antiquated, then wouldn’t he just fade away in the modern world? Well, the inconvenient fact is that, like some cerebral amalgam of Jerry Falwell and Donald Trump, James Alexander is tremendously popular and is making Wyoming the place for disaffected Christians and conservatives to become really annoying speedbumps along the triumphant march of Progress. James Alexander is making conservatism great again, and his state is reaping the glorious rewards. This is actual Right-wing conservatism here, propelled by the benevolent hand of the state, such as it is — a refreshing break from socialism, laissez-faire liberalism, cultural Marxism, and all the other -isms of our degenerate society.

What’s more, James Alexander cares about the people. Part of his campaign platform was providing nigh-mandatory rehabilitation for drug addicts. So perps busted on drug charges can either serve time or participate in state-run rehabilitation programs where they cede much of their personal freedom to the state. Qualified people actually work for these programs in return for a modest stipend, an altruistic venture Rob just cannot understand. Rob’s conversation with the governor’s twenty-year-old niece Justine sums up the Left-Right divide over this and just about any other issue you can think of:

“He [Alexander] woke a lot of people up from living just to live. A lot of people around the country don’t have much to live for except buying stuff and going to work — if they even have a job. I think there is a strong desire to be part of something tangible.”

“You don’t think American nationalism is good enough?” he asked, half sarcastically.

“It’s not present enough,” Justine replied. “Where is it? At football games? Public service announcements? It’s like a god that doesn’t even know you or even care to. It’s basically a joke.” She paused, becoming a little self-conscious. “What I mean is that what it means to be an American has changed so much that it’s basically meaningless.”

“Well, it means being free: liberal democracy and all that,” he offered.

“Free to do what? Earlier you tried to tell me that freedom to be a junkie is a good thing. Freedom isn’t anything. It’s an absence of purpose. Some people can live productive, decent, moral lives in that framework but not many.”

Rob shrugged. “Yes, but why does that matter? One of the points of liberal democracy is that a person can be as involved or uninvolved as they like. Apathy about some collective existence is the right of any citizen.”

“And how is that working out?” she asked defiantly. “How does the quality of life seem to be in the drug addicted, fragmented, selfish, atomized, modern America?”

So this Justine must be up on Sam Francis and Jonathan Bowden and is not afraid to get a little mouthy before a nihilistic New York Jew who could ruin her life — just to protect her heritage and faith. All this, and she’s pretty too. Disbelief suspended!

Another thing Rob can’t wrap his superior mind around is how James Alexander actually gained popularity after wasting enormous amounts of money and energy on a Christian monument called Mount Calvary. It’s basically a museum of theology on a big, manmade hill. Christians the world over flock to it for the privilege of walking two miles around the structure, revisiting all fourteen Stations of the Cross, viewing a life-sized, stunningly realistic depiction of the crucifixion, and listening to a live choir. Hints about Wyoming history are dropped in the artwork as well. They actually take Rob to the monument via helicopter, and he cringes through the entire thing, offending Justine in the process.

During their interview, Alexander explains:

“It was my intent from the beginning to make this state into a shelter for decent folks who feared God and respected hard work. I wanted to physically anchor that idea in this place. Mount Calvary is the nail sunken in the wall, holding fast a complaint against the world and what it has become. Monuments are more powerful than the materials and men that make them. They inscribe ideas on generations of the hearts that see them. It claims land for a sojourning and invisible power. A monument is a prayer of a whole people.”

That’s the thing about Let Them Look West: people. Phillips distinguishes a country, which is a superficial political entity, from a people, which runs much deeper. The monk who leads Rob and Justine through Mount Calvary quotes St. Peter when discussing “the people of God.” Alexander’s chauffer calls Mount Calvary “a mark of pride for a people, a cause for inspiration.” Arthur Walden, Alexander’s Machiavellian advisor, claims that Alexander “fought for the soul of people.” Alexander’s elderly uncle Paul mentions the “collective memory of a people” when explaining Jewish animosity towards Christians. And Alexander himself, in one of his campaign speeches, avers that a state “is merely a managerial hierarchy,” whereas he wants Wyoming Christians to be a people who “share something more.” He envisions them “in a wide line holding hands and walking over an open field toward the face of God.”

Aside from Uncle Paul’s reactionary opinions on Jews, race does not come up among Alexander and his people. Rob makes a snarky comment about Wyoming being the “whitest state” in the union, but that’s about it. Regardless, Alexander and all of his followers are white in Let Them Look West. Phillips makes no effort to diversify Alexander’s Wyoming. His “people” are a Christian people, yes — but more specifically a white Christian people. A people who are unapologetic about this and face down evil whenever it slouches its way towards their great state. And great it is. Phillips shares snippets of Wyoming history throughout Let Them Look West as if to show how a shared history, as well as faith and race, can help constitute a healthy identity of a people.

Let Them Look West not only provides these wistful reminders of peoplehood, it also demonstrates through practical means how peoplehood can be reestablished. If anyone reading this novel wishes to run for office in a mostly-white state, Alexander’s cutting-edge populism shows them how to do it (and also how not to do it). So, all you future politicians out there, take notes!

Not only does Phillips evince a solid understanding of state-level politics, he also lets loose many ideas on economics. Alexander is not merely about state pride, monuments, and the war on drugs. He also has a truly revolutionary idea, one which will galvanize his followers but also land him in trouble with the Feds: He wishes to issue Wyoming’s own gold-backed currency. This is so out of the blue that Rob can hardly fathom its ramifications.

“So what, you’re going to stop using US dollars?” Rob asked.

“No, no,” the governor explained in a quick and urgent tone. “That’s illegal. We have to accept legal tender for all debts et cetera, and I have no desire to default on that responsibility.”

“It’s a symbolic gesture?” Rob was still at a loss.

“Somewhat, but it is very practical as well. We spoke earlier about this place being a shelter for decent, Godly people. A gold backed internal currency helps protect the citizens here from the outside world. We are not fully at the mercy of the global empire centered in DC.”

Much has been discussed about a potential ethnostate weaning itself off the current social order. What better way to initiate this than with an internal currency? Is this an option that dissidents can explore? And what would its impact be? Marty Phillips gives us a few ideas in Let Them Look West.

I said in the beginning that there was much about this novel I didn’t want to discuss — yet here I am discussing it. Well, really, I’m not. I’m laying out the field of conflict, not so much the conflict itself, which happens almost entirely through provocative dialogue. Rob Coen and James Alexander represent much more than what they appear to be in the literal sense — in fact, they are polar opposites, agents of cultural forces which are, in effect, at each other’s throats. As a result, the thematic tension in the story inexorably snowballs. It’s like watching the lead-up to a great moment in slow-motion — and you don’t know if that moment will end in victory or disaster. It could go either way, and Phillips keeps us guessing until the very end. Does Rob destroy Alexander in some highly influential hit piece? Or does Alexander’s anti-globalist, anti-drug, pro-Christian, pro-tradition standpoint withstand this Leftist intrusion and emerge vindicated after all?

The answer lies in the little touch of fantasy that Phillips introduces into the narrative. You won’t always realize it’s there, but it is. And it becomes highly consequential for the story’s unforgettable conclusion.

It also makes me ravenous for a sequel.