The Religious Right No Longer Cares About The Gays 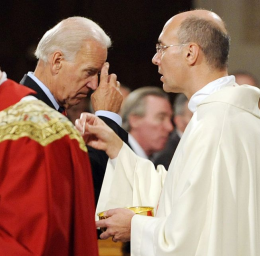 Two sharp divisions within the Catholic Church illustrate a broader trend. Over 100 German Catholic parishes now recognize and bless gay couples against the orders of the Pope. It’s not expected that they will face any punishment. In the U.S., many bishops want to deny communion to President Joe Biden over his support for abortion. Pope Francis has urged American bishops to not carry this out, but it is growing in popularity.

The two events indicate a larger change within the Religious Right: complete retreat on gay issues in favor of a total focus on abortion. While the German priests are of course not American, it’s not hard to see a similar situation arise here in one of our more conservative denominations. Catholic conservatives are disgusted with the German church’s heresy, but in America, the Religious Right has surrendered on the gay issue.

This is a major change from just 10 or 15 years ago. George W. Bush won re-election in 2004 on the promise of passing a constitutional amendment to ban gay marriage. Liberal California voted to ban same-sex marriage in 2008. Several states banned gay adoption to popular acclaim. Support for traditional values was a vote-getter, and the Religious Right was a powerful force. Now social conservatives can only muster opposition to trans athletes in girls’ sports.

There are two recent examples to show the change in the Religious Right.

For years, evangelicals and other conservative Christians battled against gays adopting kids. Now they help gays get kids. “We will now offer services with the love and compassion of Jesus to the many types of families who exist in our world today,” Bethany Christian Services president Chris Palusky said in an email announcing the change in March. The organization’s position previously stated that “God’s design for the family is a covenant and lifelong marriage of one man and one woman.” But it has been quietly working with gay couples to secure children over the last two years. Philadelphia suspended contracts with Bethany and a Catholic adoption service after a lesbian couple complained that the evangelicals referred them to another provider. Bethany capitulated to the pressure and agreed to work with gay couples. (Interestingly, the Catholic charity refused to cave in and sued the city.) In January, Bethany eliminated its position in favor of traditional marriage.

This change is brought by state pressure and changing attitudes among evangelicals. Philadelphia and many others now refuse to work with adoption services that reject gay couples. Bethany’s policy change was greeted with disappointment by many of its conservative allies.

“I am disappointed in this decision, as are many,” Russell Moore, president of the Southern Baptist Convention’s Ethics and Religious Liberty Commission, said. “This move will harm already existing efforts to enable faith-based orphan care ministries to serve the vulnerable without capitulating on core Christian convictions.”

The other big change was the lack of opposition toward Republicans supporting Caitlyn Jenner’s bid for California governor. Here was the face of the transgender movement setting out as a member of social conservatives’ party in an attempt to govern America’s most populous state. Many conservatives, particularly from Trump world, back “her.” The only voices to complain about Jenner’s elevation to a conservative icon aren’t associated with the Religious Right. It’s people like Nick Fuentes and others — many of whom are devout Christians — but are not known as figureheads in the Religious Right. Megachurch pastors and Catholic bishops haven’t said anything about Con Inc. and the GOP rallying behind Jenner.

These same groups also don’t complain about the many gays taking leadership roles within the conservative movement and GOP. They don’t raise a fuss that the party no longer seems to care about overturning gay marriage or preventing gay adoption. They certainly didn’t care that the last Republican president touted his pro-LGBT record and used American’s foreign apparatus to push for gay acceptance all over the globe.

So much for eternal, unchanging values.

Much of this change is driven by shifting public attitudes. Seventy percent of Americans back same-sex marriage. This includes over 70% of Catholics and the majority of every other Christian denomination, except for white evangelicals. But even among white evangelicals, a majority (59%) support laws that “protect” gays from discrimination. These very same laws are used to undermine religious freedom. A majority of Republicans also back gay marriage and LGBT “civil rights protections.” Young white evangelicals also have very different views from their parents. A plurality (47%) said they supported gay marriage in 2017. It’s likely that number has increased over the last four years to constitute an outright majority.

There’s also the matter of declining religiosity in America. A recent Gallup poll found that church membership had fallen below 50% for the first time. Only 65% of Americans still identify as Christian, while 26% say they have no religious affiliation at all. Religion is also becoming less important to the foot soldiers of the Religious Right — albeit slightly. In 2008, when gay marriage was still getting crushed at the ballot box, 80% of evangelicals said religion was very important to them. In 2019, less than 74% said so.

This all comes at a time when the Religious Right may be on the precipice of achieving a long-term goal: repealing Roe v. Wade. The landmark ruling that legalized abortion nationwide may receive a Supreme Court overturning this year, depending on how the court rules in an abortion case it just accepted. A revocation of Roe v. Wade would be the biggest victory for social conservatives in modern history. But this wouldn’t necessarily be a result of winning over the public to their side. Over 60% of Americans believe abortion should be legal in most cases and the numbers only increase with young people. While a fair number of Americans say they oppose abortion in most cases, only 14% favor the outright bans wanted by the pro-life movement.

Yet, unlike with gay issues, the Religious Right fervently fights over abortion and continues to shape policy on the issue.

The difference is that no one really calls you a bigot for opposing abortion. In fact, you can claim the real bigots support abortion because it disproportionately affects non-whites. It’s one of the few dissents the system will tolerate, likely because most pro-life arguments don’t threaten the liberal zeitgeist. Most abortion opponents make their case by making their position the true egalitarian stance, while demonizing their opponents as racists and eugenicists. On LGBT issues, social conservatives don’t have that luxury. The only hope to avoid bigotry is to appeal to faith, which no longer carries as much weight. Besides, to many Americans, being a good Christian just means being a “good person.” That requires one to embrace gays, lesbians, transgenders, atheists, and pretty much everyone except racists. That leaves the Religious Right with just one main issue and shifting accessory issues, like “religious freedom” (which seems to have been forgotten about) and homeschool support.

There will come a time when most evangelical groups, and possibly even the Catholic Church, come to fully accept gay couples. To fit in within society, it will be a requirement to do so. Secular authorities could threaten and cajole to get these results. Influential parishioners could pressure their pastors and priests to capitulate, or the pastors and priests could do it on their own because they think they need to make this concession to keep parishioners in their pews. However it happens, it will convey that the churches follow a higher power on Earth, and it isn’t God.