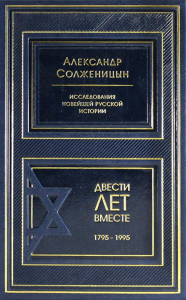 Solzhenitsyn points out early in chapter sixteen of Two Hundred Years Together that immediately after the October Revolution, the Bolsheviks wielded fearsome, unchecked power. And it was the wanton abuse of this power that led to the unspeakable violence of the Russian Civil War and the anti-Jewish pogroms to which Russian history had no equivalent.

Right away, the Red Army was a Jewish creation. Leon Trotsky, along with Ephraim Sklyanksy and Jacov Sverdlov, founded it in 1918 with many Jews in leadership positions. Solzhenitsyn cites several Jewish sources and spends pages naming names. The first Soviet secret police, known as the Cheka, was also disproportionately Jewish in its leadership (especially in places like Kyiv where there were many Jews to begin with), as it was also disproportionately non-Russian. Trotsky himself is on record admitting to this. Solzhenitsyn names names in the Cheka as well.

He also points out how dedicated to terror the Cheka really was. The early days of the Russian Civil War Solzhenitsyn describes not as a war but as the “liquidation of a former adversary,” and the Cheka was the weapon used to effect this. It held the Russian population in mortal fear. It routinely enforced the death penalty without trial. It captured and executed innocent hostages by the thousands (sometimes by mass drownings in barges). Whenever bothering to interrogate suspects, their concern was not to reveal incriminating evidence, but to discern the suspects’ heritage and social class. One’s identity was enough to determine guilt or innocence in the jaundiced eyes of the Cheka. Solzhenitsyn quotes a certain (presumably Jewish) Schwartz promoting nothing less than genocide:

The proclaimed Red Terror should be implemented in a proletarian way. If physical extermination of all servants of Czarism and capitalism is the prerequisite for the establishment of the worldwide dictatorship of proletariat, then it wouldn’t stop us.

Solzhenitsyn quotes a Cheka order to annihilate entire villages and execute their populations. He relays estimates that in Crimea from 1917 to 1921, Red forces murdered 120,000 to 150,000 people. During the Russian Civil War, Crimea became known as the “All-Russian Cemetery.” He also includes a Jewish source who remarks on the striking change which Jewish youth underwent after the Revolution:

We were astonished to find among the Jews what we never expected from them — cruelty, sadism, unbridled violence — everything that seemed so alien to a people so detached from physical activity; those who yesterday couldn’t handle a rifle, today were among the vicious cutthroats.

Things become murky, however, in Ukraine. The Revolution and the resulting Red Terror met with great resistance there. Reactionary forces, represented mostly by the White Army, had their share of victories before their ultimate defeat. And with victory, as was the case during this time, came atrocity. In many places, Jews were blamed for the rise of Bolshevism. This resulted in a series of pogroms that dwarfed the ones of the late nineteenth century. Between 1917 and 1921, an estimated 180,000-200,000 Jews were murdered in Ukraine and what is today Belarus — but not entirely by White forces. The Red Army (believe it or not) as well as various partisan groups (often Ukrainian nationalists who fought against both White and Red) were responsible for nearly eighty-five percent of this. The remainder was caused by the Whites.

Sometimes during the anti-Jewish pogroms by rebellious peasant bands, entire shtetls were exterminated with indiscriminate slaughter of children, women, and elders. After the pogromists finished with their business, peasants from surrounding villages usually arrived on wagons to join in looting the commercial goods which were often stored in large amounts in the towns because of the unsettled times. All over Ukraine rebels attacked passenger trains and often commanded communists and Jews to get out of the coach and those who did were shot right on the spot; or in checking papers of passengers, suspected Jews were ordered to pronounce “kukuruza” [кукуруза, the Russian word for corn] and those who spoke with an accent were escorted out and executed.

(Note the similarity to the famous Shibboleth episode in the equally bloody Book of Judges from the Old Testament. Coincidentally, the ancient Hebrew word Shibboleth meant an ear of corn.)

Outrages such as these accelerated the Jewish shift to the Left and forced the majority of centrist or neutral Jews to embrace the Reds. Can anyone blame them? Could this have been helped? Could any middle ground have remained during such a turbulent period? After the October Revolution, how could the average Russian peasant, now armed and part of an army, not be seething in hatred for Jews — the very people they believe stole their country from them? In fact, Solzhenitsyn describes the White Army as being “hypnotized by Trotsky” and believing that their country was now being occupied solely by Jewish Commissars.

But there was a non-insignificant number of patriotic Jews who were either sympathetic with the White cause or had actually joined White forces. Solzhenitsyn makes this point often. He also stresses how not all White forces were hostile to Jews. Rather, many tended to remain suspicious of even friendly Jews given how prominent other Jews were among the Reds. And so, in many cases, Jewish allies were either rejected or forced into humiliating supporting roles during the war. Some White generals forbade pogroms entirely, such as Alexander Kolchak in Siberia and Pyotr Wrangel in Crimea.

Sadly, this wasn’t enough. In the West, the pogroms soured public opinion of the Whites and crippled their ability to raise much-needed funds. Winston Churchill, then Britain’s Secretary of War, was sympathetic to the Russian nationalist cause, and wrote to White General Anton Denikin, explaining that the pogroms were making it difficult for him to secure support for the Whites in Parliament. Churchill also feared the influence of British Jews who were already making up a substantial portion of the British elite. Of course, the Bolshevik press took full advantage of every pogrom and did much to manipulate world opinion away from the Whites. That equally enormous Soviet atrocities did little to sway world opinion in the other direction is a testament to how tightly the Jews controlled world media even back then.

It’s a rigged game, this public opinion. Jews make ostentatious victims, but as victimizers, they lurk in the shadows like assassins. This is the two-faced beast all Rightists must face, and was something the White forces may not have understood well enough.

That being said, pogroms and a persistent, almost superstitious, Jew-hate may not have been all that doomed the Whites to defeat. But according to Solzhenitsyn, they were significant factors. When he writes that the Whites were hypnotized by Trotsky, he isn’t exaggerating much. For example, wild conspiracy theories about Trotsky worshipping the Devil and practicing Satanic rituals in the Kremlin persisted in White circles for years after the war. Without pogroms at the very least, the Whites would have been able to raise more money and make more use of Jewish talent and manpower than what they had at their disposal at the time. They also would have made Bolshevism a lot less attractive to centrist or otherwise neutral Jews. And, who knows? This might have made the difference in the war’s outcome.

White racial dissidents today can learn much from this regrettable episode. The Russian Civil War is a unique time in history since it is where racial nationalism, petty nationalism, the Left, and the Jewish Question all meet at a bloody crossroads. How could the forces of Reaction have survived this encounter? How could some semblance of normalcy have been restored in the former Russian Empire? My reading of chapter sixteen of Two Hundred Years Together tells me that a sober appreciation for the Truth — and a good deal of restraint — would have gone a long way. The enemy is the Left — in this case, the Bolsheviks. The driving force behind this enemy is, as always, the Jewish Left. But not all Jews are on the Left, and not all of the Left is Jewish. This, of course, does not mean that the Dissident Right need curry favor with Jews or even with the relatively small subset of them that is favorably disposed to Dissident Right perspectives.

What this does mean, however, is threefold:

Solzhenitsyn laments at the end of the chapter that the hard swing of Jews towards Bolshevism and the hard swing of the Whites against the Jews “eclipsed and erased the most important benefit of a possible White victory — the sane evolution of the Russian state.”

» Is “Short Time Preference” Really Such a Problem?