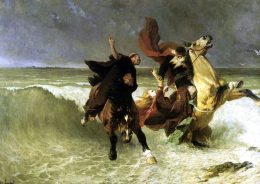 This weekend Greg Johnson appeared as a guest on Kulchur Lodge Radio, which is the Ask Me Anything livestream on Guide to Kulchur. Topics discussed include:

The episode is archived on BitChute (video) and Spreaker (audio only). Guide to Kulchur streams live on DLive Tuesdays, Saturdays, and Sundays.

Previous episodes of Guide to Kulchur are archived on BitChute.