Five Minutes with the Average Voter 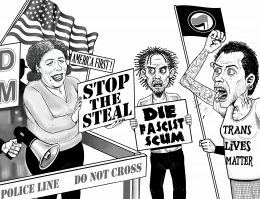 Any belief, no matter how desperately well-intentioned, in the efficacy and wisdom of democracy depends on the fundamentally flawed notion that the average voter is anything loftier than an easily frightened and brainwashed lab rat. There’s a quote famously misattributed to Churchill about how “the best argument against democracy is a five-minute conversation with the average voter.” And then there’s everything Mencken said about democracy — all of it bitter, all of it true, and all of it focused on the idea that the average voter is a gullible boob who should barely be trusted to tie his own shoelaces properly.

My interest in politics has nothing to do with matters of policy and strategy and everything to do with human group psychology — specifically how no human group seems able to cluster together for more than five minutes without designating an enemy group that must constantly be degraded, spat upon, blamed for all the world’s ills, injected and disabled with a fatal dose of guilt, and ultimately exterminated.

To pretend the Left and the Right — which are immaterial and ultimately indefinable terms with no fixed meaning but that at least in America at the end of the year 2020 tend to metastasize around the terms “Democrats” and “Republicans” as if they aren’t two arms on the same monster — don’t mutually engage in this sordid practice of scapegoating, shaming, dehumanizing, and punishing the other side is to ignore almost everything that people from these two ill-defined groups say online.

If there’s a palpable difference in the levels of one side’s nastiness and censoriousness, it’s usually only an indication that the worst offenders are the ones currently in power, and that’s how people in power behave. As Lord Acton once noted, power breeds assholes.

With its zero-frills HTML design that seems not to have changed one code bracket since 1995, Craiglist is the average person’s idea of an average website. It’s a good place to find a cheap weight bench or a used bookcase — I’ve found both on Craigslist. It’s also where I found my dog, a Boston Terrier/Boxer mix who was a little too rambunctious for the family that bought him through a breeder. Craigslist used to be one of the Web’s most popular websites — I’m certain I saw it hovering amid the Top 20 as recently as five years ago — but seems to have slipped ever since its very public self-purge of all the free “meet me at the dumpster behind Walmart for a quick blow ’n’ go” hookup ads in 2018.

Craiglist still has a “politics” section, where people who are looking for a used carburetor for a 1999 Dodge Ram can leave their political opinions like so many rodent droppings. Apart from the occasional public service announcement, the separate “rants and raves” section is indistinguishable from the politics section presumably because politics are the only thing that people tend to rant and rave about anymore, so I took a gander at both.

Online political behavior seems to consist largely of intensely miserable people attempting to exorcise their misery by pointing out someone else who seems even more miserable than they do — and hoping that the accusation sticks so that they can finally feel good about themselves. Not only do people never tire of screaming at each other, they also never tire of watching everyone else scream at one another. None of this is good.

Perusing Craigslist’s “politics” and “rants and raves” section for more than five minutes quickly becomes another tedious example of the pitfalls and idiocies of ingroup/outgroup psychology.

Those on the other side are the Real Haters. The other side is The Greatest Threat To America. The other side is a Clear and Present Danger. Our side represents the “real” America that the other side seeks to exterminate. Our side is the only decent side, the only one that values democracy. Their side consists of easily brainwashed terrorists, liars, cheats, and criminals with NO conscience. We are well-informed, while they are all low-information voters. They are disgraceful and disgusting trash, and it’s time to take out the garbage. They are the real racists, but since they are liars, they will never admit it — and why would you trust a lying racist, anyway?

We all know who the bad guys are here — and it’s NOT us. It’s THEM. We are good and they are evil. And because this is a highly moral universe rather than a cold, gaping void that couldn’t give a shit if we all dropped dead next Tuesday, our side will ultimately win. We will dance in sunny daffodil fields while they burn in hell.

Here’s what one side says about the evil other side (all citations from Craigslist are reproduced exactly the way the atom-splitting genius who pecked them out typed them):

Planned Parenthood is the biggest genocide in human history and it is little more than a Satanic sacrifice center. It doesn’t get more Satanic than that. They also love devilish homosexuals which is an abomination in God’s eyes. They are communists and communists are anti-God Atheists some are even Satanists. The Democrats are lawless drug addled lawless domestic terrorists and they also love pedophiles as we saw with Gavin Nuisance governor of Californication that signed a Bill allowing evil male faggots to rape boys as young as 14 and not have to be on the sexual predator list when they are clearly demon possessed sexual predators like the whole of the Demoncratic Party.

And here’s what that evil other side says about the one side that just called them evil:

Because this is the Internet and people are talking about politics, there are also the never-ending volleys of insults, an endlessly bitter round-robin of attacking the speaker rather than his ideas. Oh, you don’t agree? Get a life, you ignorant, miserable waste of human flesh. Man, are you a fucktard. You’ve been brainwashed, manipulated, and spoon-fed a steaming pile of manufactured crap. Pull your head out of your ass, stand there, and be quiet, please. And while you’re at it, why don’t you read a book one of these days?

And then there are the memes, the discursive equivalent of jock itch. Every once in a while there will be something of relative “substance” — a headline and the first couple sentences of an article lazily screencapped and pasted onto Craigslist — but mostly it’s some dumb picture with a dumb headline barking at you in the intensely overused Impact font.

From the right side of the peanut gallery comes a picture of Biden waving at a graveyard, thanking all those that voted for him. A hammer and sickle are superimposed over a valley of skulls to remind everyone that Communists are the real killers. Democratic luminaries lurk behind the jail bars that have been Photoshopped over their faces. A cartoon depicts Ruth Bader Ginsburg and George Floyd meeting in hell.

For the Left — STILL — it’s the monomaniacal fixation on Trump, the Hitler That Never Really Was. A dog peeing on a Trump yard sign. Trump in an orange jail suit posing for a mugshot. Trump grabbing Lady Liberty by the pussy. Trump compared to Manson. And Hitler. And Satan. A quarter-million dead Republicans who would have voted for Trump if they’d worn masks. A woman sitting on the toilet shown from her calves down, panties near her ankles, and Trump’s face on her toilet paper. A picture of a Klansman with the headline “70,000.000 RACISTS VOTED FOR TRUMP.” A fat naked Trump dragging a GOP elephant down into the ocean’s depths. Graphics comparing the MAGA hat to the swastika and Rebel flag.

When all is said and done after this lockdown ends sometime over the next 1,000 years, we will awake to discover that they’ve robbed everything from us except for the ability to scream at one another.

Politics is the art of managing people — through persuasion first, and if that doesn’t work, then by force. The reason that politics will always seem silly is that people are unmanageable.

» The Only Honest Person in the Room