The Meaning of Mishima’s Death 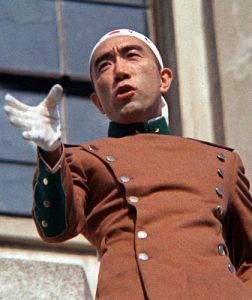 It was fifty years ago today that Yukio Mishima, one of Japan’s most celebrated men of letters and an ardent man of the Right, committed suicide at the age of forty-five. What happened, and what did it mean?

On November 25, 1970, Mishima and four followers wearing the uniforms of his private militia group the Shield Society (Tatenokai) visited the Ichigaya Barracks of the Japan Self-Defense Force (the Jieitai). They took the commander, Kanetoshi Mashita, hostage then demanded that the troops be assembled so Mishima could address them. He had alerted the press in advance. He stepped out onto a balcony to harangue the assembled troops, calling them to reject Japan’s American-imposed postwar materialism. You can read Riki Rei’s translation of Mishima’s speech here. 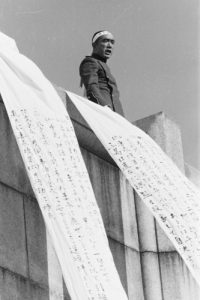 I don’t know how much of his speech Mishima managed to give. His voice was largely drowned out by circling helicopters and the jeering of the troops. But what happened next ensured that many thousands would pore over every word of the written text. Mishima returned to the commander’s office, where he and one of his followers, Masakatsu Morita, committed seppuku, a form of ritual suicide involving self-disembowelment with a dagger followed by decapitation with a sword wielded by one’s second.

Mishima’s suicide is often portrayed as motivated by the failure of his attempted “coup.” But this is silly. The so-called “coup” was merely a prelude to a suicide that Mishima had been thinking, talking, and writing about, as well as meticulously planning and rehearsing, for years. Mishima’s speech and suicide were two acts of a single propaganda drama: first, propaganda of the word, then propaganda of the deed.

What was Mishima’s message?

From the start, Japan was a military aristocracy. The highest value was honor. The individual’s sense of honor was deeply connected to his national identity, his place in society, and the duties connected with his station. Thus the honor cult upheld the entire social order.

The samurai’s preferred method of suicide is called hara-kiri or seppuku, which means cutting (kiri) the belly (hara). The English idiom “spilling your guts” connotes candor and sincerity. The Japanese have a similar idea, which they take quite literally. Mishima wrote that “a person’s sincerity is said to be symbolized by his internal organs.” To expose one’s internal organs shows that you are hiding nothing, holding nothing back. Thus to commit suicide by spilling one’s guts is, as Mishima said, a form of “exhibitionistic persuasion.” [1]

So what thesis was Mishima arguing for when he plunged a dagger into his abdomen? He wanted to persuade his audience — the soldiers before him, the Japan Self-Defense Force in general, and the Japanese people as a whole — to turn away from American-imposed materialism and parliamentary democracy and back towards Japan’s traditional culture and way of life, the mainstay of which was the aristocratic cult of honor. 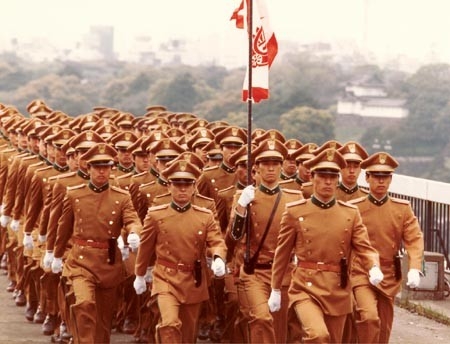 Feudalism was abolished in Japan and political sovereignty concentrated in the hands of the Emperor after the Meiji Restoration of 1868. The samurai caste was abolished, but samurai who cooperated with the Restoration were given positions in the new order. In 1873, seppuku was abolished as a form of execution, and voluntary acts of seppuku became rare. Seppuku came to be seen as archaic and transgressive.

However, even after the Meiji Restoration, the militaristic ethos that gave rise to seppuku remained powerful in Japan. During the Second World War, countless Japanese longed to prove their devotion to the Emperor by risking death for victory and committing suicide in defeat. The most terrifying expression of this ethos were the kamikaze pilots who committed suicide by crashing their airplanes into American warships.

After Japan’s surrender in the Second World War, the United States sought to abolish Japanese militarism. The Japanese military was abolished and replaced by the Japan Self-Defense Force, which was little more than a police force and auxiliary of the American military, which guaranteed Japan’s external security.

Beyond abolishing the Japanese military, the United States sought to uproot the honor culture that sustained it by making a different part of the human soul sovereign in Japan, namely desire. Post-war Japanese society is highly bourgeois and materialistic, based on the idea that the highest value is a long and comfortable life, to be purchased even at the price of honor.

Aristocratic politics is based on the contrary idea that the highest value is honor, to be purchased even at the price of our lives. The spiritual aristocrat, therefore, must be ready to die; he must conquer his fear of death; he even must come to love death, for his ability to choose death before dishonor is what raises him above being a mere clever animal. It is what makes him a free man, a natural master rather than a natural slave. It is ultimately the foundation of all forms of higher culture, which involve the rejection or subordination and stylization of merely animal desire.

A natural slave is someone who is willing to give up his honor to save his life. Thus modern politics, which exalts the long and prosperous life as the highest value, is a form of spiritual slavery, even if the external controls are merely soft commercial and political incentives rather than chains and cages.

But all that could be dismissed as mere talk until Mishima actually put his words into action.

Did Mishima hope to encourage his followers to commit suicide? Of course not. He even tried to persuade Morita, his second, to live on. He wanted Morita and the rest of the Shield Society — and anyone who cared to imitate them — to prefer death to dishonor, to overcome their fear of death, and then to fight for the restoration of Japanese civilization.

I was once asked what the most honorable form of suicide is. My answer was to give up the pursuit of personal happiness and devote one’s life to the nationalist cause. Mishima’s death inspired countless people around the world to similar lifetimes of devotion. We remember his death so that it might inspire similar devotion today.

« Video of the Day: Poetry With a Splash of Blood