Pop Music is a Satanic Mind-Virus! Part One: Jungle Beats 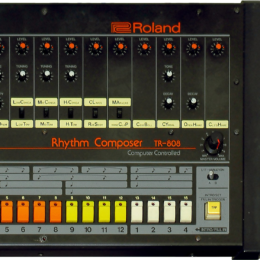 As the country gets more diverse, the radio gets more homogeneous. I don’t mean this in the ethnic sense, of course; America’s rockstars are more colorful than ever! Instead, the songs that dominate the country’s charts are beginning to sound more and more alike. The average pop station tends to be an indistinct mass of the same noises promoted by different “artists” ad nauseam. The sound I am referring to most specifically is the “trap” beat, the infinitely malleable blueprint of rap tracks, IDM wankery, and painful dance festival remixes the world over.

This drum pattern was conceived in the early days of hip-hop. Absent actual drum sections, rickety synthesizers were employed as a substitute, later becoming a defined sound of their own. The hallmark of the trap beat is the intense sub-bass produced by the kick drum on a Roland TR-808 drum machine. By extending the decay on the kick drum out, one can create heady basslines that roll in time with the track’s rhythm. A sharp snare is placed on the 2nd and 4th beats of the bar, and these intense kick drums are syncopated around persistent closed hi-hats:

The end result is a drum pattern that is easily replicated by virtue of its rhythmic simplicity, easily riffed upon for its various manipulable factors (changed tempos, hat patterns, et cetera), and easily paired to even simpler melodies that can be cooked up in the bedrooms, multimillion-dollar studios, and laptops of the world. This drum pattern is ubiquitous in every sense of the word. It appears, in various permutations, in just about any genre I can think of. Its ease of production led to the absolute swamping of SoundCloud with amateur-produced, horrendous rap songs recorded by teenagers under the impression they’ll make it big in what is likely the most oversaturated musical market on Earth.

Some of the most popular trap songs on Earth feature the laziest possible production known to man. “Old Town Road,” a track that broke Billboard’s record for longest #1 position, was created by dropping the banjo strums on Nine Inch Nails “34 Ghosts IV” atop one of these drum patterns. It does not get more cut-and-paste than that.

This rhythm has staying power not just for its braindead simplicity, but also for the fact that it can make just about any collection of sounds swing. It is somewhat alien to the more cultured ear, but the primal bombastics of this rhythm allow producers to hide the fact that their melodic compositions are half-baked accompaniments, at best. Whole subcultures are devoted to what is plainly called “bass music,” with entire legions of people ready to be aroused by the fact that the club’s floor is shaking. Songs that feature this rhythm appeal to the untrained ear because they are predictable in the best way possible. Everyone knows where the snare drum will land, everyone knows when a drop is coming, and everyone knows how to “dance” to these tracks. They differ mostly in what sort of money, bitches, or rims the lyrics are discussing, or what “innovative” sample is chopped and screwed over the top.

In more ways than one, the trap drumline is the ideal form of commercial music, since it appeals to the least common of the least common denominators. Blacks seeking jungle beats get their fix of chest-thumping bangers, normies that lack a useful aesthetic sense get their fix of predictability and social affirmation, and record labels continue to rake in dough at the expense of the broader cultural landscape. It is all great fun!

The rhythm’s pervasiveness is so great that by my count, 23 of today’s Billboard Top 40 feature this exact percussive background. That is 58%. If you are looking for overrepresentation of anything, then you have it right there. For those curious about what rhythms comprise the rest of the charts, the answer is funk house and uninspired minor-key piano ballads. There is a certain self-reinforcing mechanism at play here as well. One could consider the obvious commercial explanation: music like this apparently sells, and so more and more of it is made. But this doesn’t fully answer the question as to why this rhythm appears in just about anything and everything. One might also consider that these rhythms are cheap and simple to produce, and are therefore churned out as part of a musical economy of scale. (I shudder at the thought of factories full of weed-smelling beatmakers.) Even this doesn’t really get to the crux of the matter. Perhaps these rhythms are so endlessly spewed out because they have become the musical equivalent of a forced meme, a pattern foisted onto the masses in such quantities that they have grown accustomed to it, or in the case of someone who has marinated in these thumpers since the first time they listened to the radio, they have grown to actually enjoy it. Every day until you like it, as they say.

Culture-manipulation is remarkably easy to pull off when one has power and money, because consumers of culture are mostly immune to criticisms leveled against their idols on a moral or critical basis. This is due in part to the fact that the average person doesn’t have much room for higher reasoning, and therefore just doesn’t care. Another factor in the average person’s calculus is the idea that absent their current favorite thing, culture would provide nothing to take its place. That makes sense to a mind that takes the world at face value. But I don’t think that it is a stretch of the imagination to suggest that these people would enjoy whatever the moguls of the world put on the radio and told them to like. I sincerely doubt that the natural course of the fine arts and the personal tastes of the demos led to giant ass balloons on stage at the VMAs. A very powerful hand must have been involved in this development.

It would be one thing if blacks were bumping about to phat beats in their own ghettos, or ideally, their own countries. But the fact that this very specific musical development, one that lacks any significant deviation from its standard archetype in any of the aforementioned pop music hits, is so utterly dominant over the charts is concerning. This is the music that the white people of the United States are expected to hear and expected to enjoy. Who, exactly, would stand to benefit from the hegemony of a creatively suffocating and culturally degrading 8-bar pattern, one that can be endlessly replicated into millions of albums’ worth of detritus? It’s repugnant enough that this has obvious financial incentives. But what about other incentives at play? Why might it behoove those in charge to douse American whites in a musical form that appeals to most degenerate baseness and artistic mediocrity possible?

Well, we might consider who made the first strides towards popularizing the trap rhythm in the mainstream. While the TR-808 drum machine enjoyed underground popularity, one man developed a specific technique that would lead to its rapid adoption in the musical mainstream, along with a healthy dose of pre-established clout in the industry. By dragging out the decay on the kick drum sound on the 808, rolling basslines could be created, the defining attribute of the trap rhythm. The man behind this development?

Rubin, at this point in time, was already a major player in the music business. His work at Def Jam Recordings, the label that brought rap music into the mainstream, meant that he rubbed elbows with some pretty influential figures. Many of these people, Rubin included, did not hang up their coats after the heydays of the 80s were over. Much more lied ahead of them; and much more lied ahead for the state of popular music.

» Notes on Schmitt’s Crisis & Ours