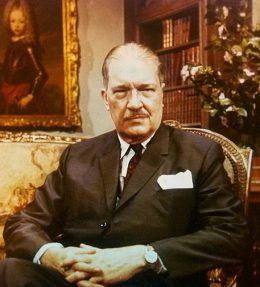 Today is the birthday of Revilo Pendleton Oliver, born in Texas in 1908. He was Professor of Classics and Modern Languages at the University of Illinois (Champaign-Urbana) for many years, an analyst with the War Department in the 1940s, and a contributor to the National Review and other publications from the 1950s onward.

It was in Prof. Oliver’s last active decade, the 1980s, that he really let fly with some of his most provocative commentary. At this point he was writing mainly for George Dietz’s Liberty Bell magazine, a small monthly. He was now retired from university teaching as well as other time-consuming endeavors that had taken up much of his life, and though he and his wife Grace were increasingly infirm, he was in many respects much more intellectually lively than he had been when writing essays and reviews in the 1950s and ‘60s.

In those olden days, he was a sort of kept intellectual, swallowing his gall while he promoted a flavor of conservatism and anti-Communism that was sanitized enough for William F. Buckley, Jr. (in the 1950s) or Robert Welch (1960s). Later on, in essays published in his book America’s Decline,[1] he pungently denouncing the shallowness of those gentlemen’s patriotic-conservative racket.

One thing that emerges in Prof. Oliver’s late writings is his puckish, provocative undergraduate streak. His essays are sprinkled with pugnacious asides that he liked to toss out, like bull-session ammunition he’d been saving up for many decades. Frequently it’s snark and nonsense, because this is RPO in polemical, not political, mode. I recently noticed how, in a discussion of the Enigma encryption machine that was used by the Germans in the Second World War, he avers that “Admiral Canaris . . . was almost certainly a Jew disguised as a Greek.”[2]

The careful reader knows this is not intended seriously. (There was no shortage of officers in Germany who opposed Hitler, and who may have tried to seek some accommodation with the British and other Allied powers after 1942, whether because of snobbery, or ideological opposition, or because a jumped-up little corporal was driving their country off a cliff, or simply because they continued to imagine they were just doing the Great War again – a fair fight amongst officers and gentlemen.) The Canaris remark was just too good a joke to let go. A crypto-Jew hiding behind a Greek-ish name! So he put it in, with more of a smile than a snarl, and rightly expected that his readers would appreciate the humor. I don’t know how many readers he had back in the 1980s –  probably no more than ten thousand – but the ones I knew were an erudite bunch who didn’t need to have jokes explained to them.

Farther down, in the same essay on intelligence operations, he describes that war as something contrived “to punish the Germans for disobedience to Yahweh’s Master Race of world-destroyers.” Oliver obviously didn’t believe there was a Yahweh’s Master Race – or even a Yahweh – or that Churchill provoked and prolonged the European war because he was in the mitts of his Jewish controllers. The real story with Churchill and his clique is that he longed to get back to the late-Victorian British Empire of his youth, and keep it going a bit longer. To this end, he was willing to compromise with anyone who would keep he Suez Canal open, as well as sea access to the Indian Ocean. Stalin, FDR, the Jews: any port in a storm. A short-sighted strategy, of course, but once the war opened, he took what he could get.

Oliver would stick a derisory remark of the “Yahweh’s Master Race” sort into nearly ever piece he wrote in the 1980s, much in the way Frank Sinatra had to close every late-career concert with a croaking rendition of “My Way.” No doubt this gave him pleasure, since even a mild intimation was so verboten during his years with the Buckley and Welch operations. But there was more than nostalgia or revenge going on here. In the Reagan era, these snipes had a pointed, contemporary resonance. By the 1980s, it had become an embedded factoid in popular culture that the Second World War was really all about the Jews and “the holocaust,” a term which up to that time usually referred to nuclear armageddon of the Doctor Strangelove variety. The word took on its new meaning only after 1978, when the NBC television network broadcast a fictional mini-series about Nazis and Jews entitled Holocaust. Meanwhile, America’s international relations were becoming thoroughly subverted by the “neoconservative” political fad, which was just another name for an Israel-first foreign policy. The Israel lobby, and such Jewish neocons as Richard Perle and Paul Wolfowitz, had been around a long time, but it was only during the Carter and Reagan administrations that America’s global interests became reframed as an abiding, biased concern with whatever was happening that day in the Levant. Anyone with a modicum of imagination could foresee the disastrous adventuring of the next twenty-five years, culminating with the George W. Bush fiasco in Iraq.

Some old-timers didn’t entirely get with the program, and paid the price, as for example George H. W. Bush, whose good friend and Secretary of State James Baker repeatedly took issue with the neocons in the early ‘90s. At one point in 1992, discussing election strategy, Baker famously dismissed the Israel lobby with the remark, “F*** the Jews, they didn’t vote for us anyway.” This arguably led to the elder Bush’s defeat for reelection in that year’s strange, three-way presidential contest.[3]

The neocon phenomenon was largely enabled by what was happening on the home front. When Prof. Oliver took off against Evangelicals or Israel-obsessed “Christians” who pledged fealty to “Yahweh’s Master Race,” he was really commenting on the bizarre turns American political culture had taken in recent years:

1. The reframing of American conservatism as “social conservatism,” a media-driven campaign to gag discussion of substantive issues. Bible-thumping TV divines (Pat Robertson, Jim Bakker) and direct-mail hucksters (Richard Viguerie, Jerry Falwell) promoted a flavor of ersatz conservatism in which you were encouraged to picket abortionists and stomp the fags – but there was no talk of race or culture, please. (And please give generously: this “social conservatism” was always a fundraising scam as much as anything else.)

2. The marginalization of Israel-critical commentary in the media and political spheres. The high point of this came about 1991, when Prof. Oliver’s old colleague Bill Buckley was bullied into putting out an entire issue of National Review that denounced “anti-Semitism.”[4] Here, “anti-Semitism” was clearly equated to criticisms of the Israel lobby, since a primary culprit cited was veteran columnist and television commenter: Pat Buchanan. Earlier, National Review had banned another thought-criminal, writer Joe Sobran.

The political fallout suffered by the first Bush administration in the 1992 election has already been mentioned. But in the early 1980s, attacks by the Israel lobby against members of Congress were already in full swing, unseating Representatives Paul Findley and Pete McCloskey, and Senator Charles Percy.

3. The capture of major “conservative icons” who prior to the 1980s did not seem to figure much – either pro- or anti- – in Israeli and Jewish calculations. Buckley here is a prime example. We will never know the full story of the pressures put upon him from the founding of National Review in 1955 until his waning years, when the magazine had long since ceased to convey anything but abstruse frivolity; but pressures there certainly were.

A more immediate example for Prof. Oliver was Ronald Reagan, whose election in 1980 seemed such an unalloyed triumph for the conservative camp, but four years later had become, like his longtime champion Buckley, just another glorious old speechmaker who really stood for nothing at all.

In both cases, the indications are that the weakness and irresolution were there from the beginning. Reviewing the Reagan record in a 1987 piece called “Poor Old Ronnie,” Prof. Oliver suggested that the current President was really nothing more than a useful tool and an empty suit:

Ronnie’s career through his first year as Governor of California was ample proof that his director was not to be trusted. Remember, we are not talking about politics in the Aristotelian sense, the determination of what is to a nation’s advantage and will ensure its future, which now interests no one except Neo-Nazis and other wicked people who think our race should not commit suicide. We are talking about politics in the American sense, i.e., the game that is played for profit by two opposing teams in a kind of grandiose football. Ronnie not only double-crossed the voters who had elected him because they were impressed by his recitation of spiels made up by his speechwriters: that is only normal and commonplace today. Posing as a “conservative Republican” and elected by the support of the “conservative Republican” politicians, he regularly double-crossed them for the benefit of the “Liberal (i.e., proto-Communist) Democrats.”

That Ronnie, with a record that even a ward-heeler could understand, was given a political office after his term as Governor was simply proof that the old game of politics is now “fixed.” The teams no longer play to win or lose, but to amuse the bovine public.

In the autumn of 1984 it was more than ever clear what made the old hoofer perform. Despite the efforts of the liepapers to give the impression that the election in November was to be a contest, it was obvious that Reagan’s opponent, the despicable hero of the homosexuals, and the moll who had been chosen as his companion were stooges, employed to make the election entertaining and even exciting to individuals who thought the result would make some appreciable difference in what they would suffer at the hands of “their” government.

By the spring of 1984 it was indubitable that the Jews had decided to reëmploy Ronnie as their shabbat goy in the White House, and that, of course, meant that he would be reëlected in November.

Here follows an excerpt from a European Jewish publication in which readers are assured that while Jews don’t like Reagan, Reagan will most assuredly be good for the Jews and Israel:

The only noteworthy result of the election was the size of the majority given Reagan, which corresponded almost exactly to the majority given Nixon at the very time that our masters were preparing to eliminate him with the factitious scandal called “Watergate.” That showed how tirelessly American “conservatives” take sucker-bait, but it also suggested that Ronnie might be fired before his four-year contract expired. He might be forced to resign, as Nixon had been, or assassinated, as Jackanapes Kennedy had been, to incite hysteria among the boobs, or, given his age, nature might be helped to take its course . . .[5]

We now know, of course, that Reagan long suffered from progressive dementia, and this may have begun to kick in by the time he turned 70 and entered the White House in 1981. RPO might have been a little less cruel to the President if he had known this – but probably not. After all, he was three years older.

[3] The Texan computer-systems tycoon H. Ross Perot entered the 1992 presidential race as a Pat Buchanan-style rebel, focusing on Republicans who were disaffected by George H. W. Bush’s betrayal of his “no new taxes” pledge. This was thin gruel to base a campaign on, given that Buchanan himself already was mounting a third-party effort, and from the start Perot was suspected of being a “spoiler,” boosted merely to tilt the election to the Democrats. Perot vacillated, dropped out of the race for three months, then reentered and siphoned off enough popular votes (19%) to give an election plurality to Bill Clinton (43%).