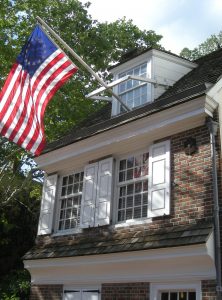 The Betsy Ross flag is now a “hate” symbol — and that’s a good thing.

The first flag of the United States of America became a controversial icon this week thanks to former NFL quarterback Colin Kaepernick. Nike cancelled its upcoming Betsy Ross shoe line after Kaepernick, a spokesman for the corporation, complained. He said the flag has a “connection to an era of slavery.” That argument was persuasive enough to nix the entire shoe line.

Outrage predictably followed. Arizona’s Republican governor announced he would scrap state subsidies to Nike, and many conservatives vowed to boycott the company.

Identitarians shouldn’t join in the outrage. For one, Nike is a vile multinational corporation that relies on cheap foreign labor. We shouldn’t want Nike to exploit our national symbols for profit. Second, and more importantly, this controversy gives identitarians a symbol of our own. Journalists claimed “hate groups” had already appropriated the flag. Their evidence: the flag being hung up in an Identity Evropa member’s house, and a couple of Michigan high school students waving it one time alongside a Trump flag in 2016. This paltry evidence was enough for journalists to declare it a hate symbol.

The truth is that the Betsy Ross flag’s most recent political associations were with the Tea Party and other boomer conservatives. One might think of an old man cosplaying as a Minuteman when sighting the Betsy Ross flag. Thankfully, Tea Party cringe is behind us, and the Trump era offers new possibilities for nationalists.

Respectable conservatives tried to argue that the Betsy Ross flag can represent the new America and all its equality and diversity. “No matter who waves the American flag, or celebrates our nation’s founding — no matter how boorish, ignorant, or even bigoted they might be — they don’t get to take it away from us,” Never Trumper Charlie Sykes wrote. “It’s not their goddamn country, it’s ours.”

Clearly, the Betsy Ross flag does not represent the new America. It represents the historic American nation that was founded by whites for whites. Every man who signed the Declaration of Independence was white. The Declaration of Independence may have said “all men are created equal,” but the man who wrote those words saw non-whites as outside the polity. The Founders relied on painting the British as the allies of Indian “savages” and slave “insurrection” in order to persuade the colonists to revolt. The Revolution was not a dispute over natural law or a revolt to enshrine libertarian principles. It was a racially-conscious people’s revolt against a foreign power that was seen to be in league with racial aliens. The European colonists wanted to control their own destiny.

The American Revolution was an identitarian struggle and its symbols represent our cause.

The identitarian spirit continued to animate the early history of America. Once again, no non-whites participated in the Constitutional Convention. The first Naturalization Act limited citizenship to “free, white persons of good character.” Americans warred with Indians under the collective assumption that they could not join the polity. Many non-slave states excluded blacks, and most states prohibited miscegenation.

Non-whites do not see themselves in the Betsy Ross flag. No amount of Conservative, Inc. nonsense will convince them otherwise.

An American identitarian movement must base itself upon American symbols and figures. The Betsy Ross flag is arguably the most mainstream symbol that we can appropriate. Our standard flag is great, but it is overused and represents current year America. The Empire of Nothing flies Old Glory right above the Pride flag. It shouldn’t be discarded, but it’s not exclusively ours.

The Gadsden flag is too much associated with libertarianism, and “Don’t Tread on Me” is not our rallying cry. We don’t want to merely be left alone. We got into our present crisis due to whites insisting they just wanted to be left alone, the rest of America be damned.

The Confederate flag also represents white identity, but only that of white Southerners. Descendants of Union soldiers and more recent European immigrants can’t relate to it. It’s also too closely associated with redneck culture and discredited political groups. For all its glory, the Confederate flag cannot be the flag of American identitarians.

That leads us to the Betsy Ross flag. It represents America’s roots and the true spirit of the Revolution. Its thirteen stars represent the colonies that were created and settled by whites. The flag itself is a rebuke to silly notions that the Indians were the original Americans. There was no America prior to European colonization. The Betsy Ross flag also has significant mainstream appeal, and can now signal a revulsion for the corrupted America of diversity and globohomo. The Left’s hatred for it will increase its politically incorrect reputation.

It’s the perfect symbol for the historic American nation and its struggle to survive.

Some on the Dissident Right dismiss America as having been corrupt from the beginning. That’s a myopic view. Fortunately, the Left itself has done a commendable job of diminishing the popular delusion that the Founders were colorblind egalitarians who were at war with tradition. Most academic works stress the Founders’ “racism” and “sexism.” Those efforts have seeped into the culture, as evinced by the growing desire to “cancel” Thomas Jefferson, George Washington, and other American heroes. Prominent Democrats say the Betsy Ross flag is a hate symbol, and claim America was founded on white supremacy.

A few Leftists go so far as to say the Revolution was a mistake altogether. “The American Revolution gave strength to the white, Anglo-Saxon majority but it marginalized many other elements of society. Subsequent ‘democratic’ revolutions in the 19th century had the same effect,” The Nation’s Jeet Heer wrote in 2008. Similarly,Vox’s Dylan Matthews wrote in 2015:

I’m reasonably confident a world in which the revolution never happened would be better than the one we live in now, for three main reasons: Slavery would’ve been abolished earlier, American Indians would’ve faced rampant persecution but not the outright ethnic cleansing Andrew Jackson and other American leaders perpetrated, and America would have a parliamentary system of government that makes policymaking easier and lessens the risk of democratic collapse.

These developments pain centrists and conservatives. They admit the Founders weren’t perfect, but they wish present-day Americans would focus only on “all men are created equal.” According to these types, America’s founding was egalitarian in spirit and paved the way for multicultural America. In their eyes, it should be honored for what it led to and not denigrated for what it was. That’s a quaint delusion.

Non-whites look at the Founders and see white slaveowners who would prevent them from voting. No amount of attention paid to marginal figures like Crispus Attucks will make minorities see themselves in the Founding. That leaves a predicament for centrists and respectable conservatives. They celebrate equality, immigration, and diversity, yet are appalled by the lack of respect exhibited by minorities and liberals for national symbols. Their faith in those things may not diminish, but it should for average Americans.

American identitarians want America to remember its roots. It was a nation created by whites for whites. Our revolution was fought for freedom against a foreign power and allowed us to make our own destiny. The Founding inspires our cause and mirrors our fight today. What better way to honor the Founders than to make their flag our own?

The Left doesn’t just want to replace our flags and symbols. They want to replace us. Waving the Betsy Ross flag signals that we, our heritage, and our symbols are not going away. This is our America, goddammit.