No Punishment for Anti-White Hoaxes 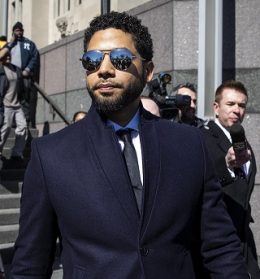 Jussie Smollett leaving the Chicago courthouse after the charges against him were dropped.

Jussie Smollett created the hate hoax of the year – and may suffer no consequences for it.

Chicago prosecutors announced Tuesday that all charges against the black Empire star in connection with his infamous hate hoax would be dropped, and his record would be wiped clean. This sweet deal did not even require Smollett to admit any wrongdoing. The only penalty he paid was the forfeiture of his ten thousand dollar bond and sixteen measly hours of community service.

As readers may recall, Smollett captured the nation’s attention with his claim that two racist Trump supporters had assaulted him in downtown Chicago in January. He claimed the two Trump-loving assailants threw a noose around his neck, poured bleach on him, and then declared, “This is MAGA country!”

The story seemed fishy from the start, and evidence quickly mounted that it was a hoax. Who can forget that Smollett claimed that he had talked on his cell phone, held a Subway sandwich, and fended off his attackers all at once? It finally emerged in February that Smollett had allegedly paid two Nigerians he already knew to stage the assault in order to negotiate a raise from Empire’s producers. Chicago authorities threw the book at Smollett for the false report and charged him with multiple felonies.

It would have been a fitting conclusion for Smollett to end up in jail, but justice won’t be delivered by Chicago prosecutors. The actor could still face federal charges for allegedly sending a threatening letter to himself. One hopes the Department of Justice, at least, won’t let a hate hoax go unpunished.

Why did the state’s attorneys in Chicago let Smollett off? According to Cook County state’s attorney Kimberly Foxx, Smollett had already paid his debt to society. “After reviewing all of the facts and circumstances of the case, including Mr. Smollett’s volunteer service in the community and agreement to forfeit his bond to the City of Chicago, we believe this outcome is a just disposition and appropriate resolution to this case,” Foxx said in her statement. Another prosecutor told the media that the state attorney’s office was too focused on violent crimes to devote resources to the biggest hate hoax in years.

Only liberal journalists are dumb enough to believe these explanations. The real reason is likely a great deal shadier.

Foxx had tried to wrestle the investigation away from Chicago police and hand it off to the FBI. She did so after Tina Tchen, Michelle Obama’s former Chief of Staff and incoming chief of the Southern Poverty Law Center, requested it on behalf of the Smollett family. Smollett’s sisters worked for Barack Obama’s presidential campaigns, and Jussie himself had interacted with the former President and First Lady.

It seems Smollett’s connections paid off for him. It’s fortunate when you create a hate hoax and then have a progressive black prosecutor press charges against you when it goes sideways. Foxx promised a progressive agenda that would neuter the police and go easy on criminals when she campaigned for office in 2016. She wanted to target “racial disparities” in the justice system, protect non-citizens from deportation, reduce bails, and allow drug offenses to go unpunished. In other words, the perfect agenda for a crime-ridden city. And just last week, the influential Center for American Progress praised Foxx as the ideal “progressive prosecutor.” Going easy on hate hoaxers must be integral to achieving that ideal.

Both the Chicago Police Department and Democratic Mayor Rahm Emanuel are furious at Foxx’s decision, and have demanded the Justice Department step in. They have no doubts that Smollett fabricated the whole affair, and want justice. But as is becoming clear, Smollett’s absolution is the justice you receive in multiracial America. Blacks stand with other blacks against the police, and hate hoaxes are forgivable – particularly if they smear the right groups and advance the right message. In their eyes, why punish the perps?

Foxx claims to have recused herself – but not her office – from the investigation last month. Police officials don’t buy this claim, and blame her for the charges being dropped. Regardless, it was still her office that handled the prosecution against Smollett. Smollett’s legal team would likely have levelled accusations of police racism if their client’s case had gone to court. Bigots within Chicago’s police force were intended to be the villains; not this oppressed gay black man. And the state attorney’s decision empowered Smollett and his defenders to stand by his lies to the public.As he exited the courthouse, Smollett told the press:

I want you to know that not for a moment was it in vain. I’ve been truthful and consistent on every single level since day one. I would not be my mother’s son if I was capable of one drop of what I was accused of.

In reality, the record shows Smollett has been the opposite of truthful and consistent since day one. It’s a damn shame he would sully his mom’s reputation to uphold his lies.

He added in his statement the press that he would like “nothing more than to just get back to work and move on with my life,” but that he will, of course, “always continue to fight for justice, equality and betterment of marginalized people everywhere.” His legal team supported Smollett in his lies, insisting Smollett was “attacked by two people he was unable to identify on January 29th.” His lawyers continue to insist he was assaulted by the Nigerians, which still makes him a victim.
One of Smollett’s lawyers has theorized the Nigerians may have worn whiteface during the attack and that’s why the actor thought he was attacked by white racists.

An unidentified public relations company sent a memo to several reporters with talking points defending Smollett. It claimed that the police and prosecutors had dragged the actor through the mud, but presented no additional evidence. It also claimed Smollett has already paid a heavy price “as a result of these false charges.” And some prominent journalists appeared to be duped by this. “Let’s not rush to judgement after there was already a rush to judgement,” black PBS correspondent Yamiche Alcindor tweeted. “So far, we know very little about the #JussieSmollett case.” Likewise, after the news broke, CNN host Brian Selter said, “The narrative has once again changed from victim to villain back to victim, it’s been very confusing . . . people don’t know what to believe and we may never really know what happened on the street that night in Chicago.”

Journalists were responsible for the initial hysteria around this case. The story of a gay black actor assaulted by Trump supporters was too good not to milk it for the headlines. America was hit with all the takes on it imaginable: Smollett’s assault was a modern-day lynching; it shows the threat that Trump’s America poses to minorities; and it reveals that even deep blue Chicago is somehow MAGA country, because some white people still live there and white people are inherently racist.

Make no mistake: the hoax was a crime against white America. The coverage blamed whites’ voting habits and viewpoints for the (fake) violence, and called for us to put an end to this behavior. Once again we are told that hate speech laws are needed, and that those whites who voted for Trump should be shunned in public life. We have to do it for our poor gay black actors.

The hate hoax cost Chicago hundreds of thousands of dollars and damaged the city’s reputation. It also smeared millions of white Americans and justified hate against them. Thus, filing no charges against Smollett sends the message that future hate hoaxers won’t be punished.

It’s fitting that this development comes on the heels of Robert Mueller’s report. Mueller concluded that there was no collusion between the Trump campaign and Russia – a theory which has been considered a fact by mainstream media outlets and “intelligence experts” since it was first suggested. The Russiagate controversy convinced many Americans that a hostile foreign power had interfered in our elections and was controlling our President. It weakened President Trump, and possibly pressured him into adopting a more neoconservative foreign policy. Remember all the shills gleefully saying that Trump couldn’t be under Vladimir Putin’s influence because he had bombed Syria?

The realist foreign policy Trump campaigned on was ditched, in part in order to appear tough on Putin. This has kept American troops in Syria and hindered any long-term solution to the war-torn nation, and has made Trump rattle the saber against Russia. The New World Order remains untouched thanks to Russiagate. Trump was also likely hindered in pursuing positive domestic reforms, such as infrastructure reform and immigration restrictions, due to the hostile atmosphere spawned by the investigation.

Most importantly, Russiagate undermined sixty-three million Americans’ votes – those who had selected Donald J. Trump. The conspiracy theory allowed Trump’s opponents to ignore the will of those voters in favor of the fantasy of a Russian hack deciding the election. In this view, Trump voters were bamboozled by Russian bots and fake news to support an agenda that would reduce immigration, bring the troops home, protect American manufacturing, and restore law and order. No rational American could support such an agenda; it had to be Russian misinformation that fooled so many citizens. (Never mind that this agenda just happens to run contrary to the wishes of our elites.)

Many Russiagaters had hoped proof of collusion would invalidate the 2016 election and send the whole Trump administration to jail, as well as empowering the great rainbow coalition to make sure that white Americans never have such an opportunity again. Numerous grifters and nutjobs made bank off the Russia hysteria. MSNBC host Rachel Maddow became one of the top cable news hosts because of her unhinged Russophobia and conspiracy theories. Everything Trump has been doing was seen as an act dictated by our era’s Adolf Hitler.

And that was a noble goal in itself.

Both Smollett’s hate hoax and Russiagate were presented to the American people as facts which proved that white America was hate-filled and treasonous. We were subjected to lies and rhetoric imploring us to hate ourselves and distrust those who would champion our interests.

The elites won’t apologize to us for their lies. They won’t admit Russia didn’t put Trump in the White House, or that armies of hateful whites aren’t stalking innocent non-whites. They will just shrug their shoulders, say “whoops,” and move on to the next lie.

People worry about the institutional harm that will come from these hoaxes. They fear that no one will trust the people we’re told to trust anymore. But if our institutions are built on lies and deception, Americans should distrust them. You can already sense that the hoax industry’s deception is wearing thin for middle America.

The sooner middle America stops buying these lies, the better.