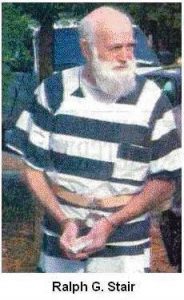 From a small farm in the state of South Carolina in the United States of America, Brother Stair is trumpeting the message of the soon return of the Lord Jesus Christ. The Last Day Prophet of God is reaching every nation in the world with the message he has preached faithfully for over forty years …. “Jesus Christ is Coming in Your Lifetime! This is the Last Generation….The Last Hour….Prepare to Meet your God!”[1]

For a couple years now, I’ve been fascinated by the late-night broadcasts of one Brother Stair, the Last Days Prophet of the Lord, and his Overcomer Ministry. Spinning the dial some angst-ridden 3 AM, I was halted by his deep, scratchy backwoods twang. Then I realized this was something special.

Brother Stair distinguished himself from other end times fanatics in a number of ways. First, the way he would lace into anyone who dared to question him. No charm offensive here. You dummy! You godless pinhead! Listen to this fool! People would leave long messages on his machine (more on that anon), and he’d play them at length, interrupting with his various profane reactions. You serpents! You whited sepulchers!

One rant that really impressed me was when he heaped scorn on those who, rather than take him up on his offer to come down and live in his compound/commune/trailer park in Walterboro SC, supposedly jumped on the housing bubble only to crash and burn.

“So, where’s your big house now, huh? Your marble counters and mud room? You’re living on the street now, ain’t you? [Brother Stair’s language dropped into redneck from time to time, just infrequently enough to make it sound authentic] You could be down here in Walterboro, housed and fed, but nooooooooo, you had to be a big shot![2]

Well, that’s an interesting take on the Christian “not of this world” attitude. And what alt-rightist hasn’t felt the same Schadenfreude?

Then there was his technological sophistication – true archeofuturism, if not steampunk. Apparently, the trailer and cabin compound housed a “radio room” from which Brother Stair broadcast to the world. And why the world?

This was key: his medium (well, media) was his message, just as McLuhan had predicted. For Jesus says (if read in a certain state of mind) that when the Gospel is preached to the whole world, the End Time will come.

So Brother Stair was no ordinary “radio preacher;” no, he had figured out that there were gazillions of AM and FM and shortwave stations out there desperate for paid programming; especially shortwave stations. And then there’s the internets; and don’t forget the phone app,[3] and even, yes, the goddamn phone – just dial this number, Brother Stair would tell his audience, and you – or grandma — can listen to him on your phone … all day long.

What you could also do was leave a message – sure to get a response; like newspapers and blogs, Stair knew that “reader response” was a cheap source of filler – but only if you would give a “frequency report” so that he could keep track of where his message was being heard.

Brother Stair boasted – and who can doubt it? – that he was heard throughout the whole world, 24/7. Just sit back and wait for the apocalypse.

The broadcasts themselves seemed endless, hour after paid-for hour, as if they were a 24-hour affair. Of course, with 50-plus years of activity, Brother Stair had a lot of material to draw on.

And again, in his too primitive to be anything but avant-garde manner, draw on it he did. He would shamelessly rebroadcast material, including old “prophecies” too vague to be incorrect, cutting and pasting on the fly in a way that would shame, or garner the praise, of a “Scratch” Perry. Long screaming rants would suddenly be cut off … screech!… to make way for current events announcements or a brief snatch of a “service” at the compound.

Filler consisted of appropriate excerpts from one of those “Christopher Plummer Reads the Bible” recordings, and blasts of shofars (larping again).

And each hour (blocks of radio time are sold by the hour) the same relentless message, before being ruthlessly cut off by the local station, only – in many cases – to start up again for another hour’s worth:

“Jesus Christ is Coming in Your Lifetime! This is the Last Generation…. The Last Hour…. Prepare to Meet your God! …. Maranatha!”[4]

On my local station, WSNR-AM (which, since it seemed to broadcast Russian programming from 6 AM to evening,[5] I thought of a Sports News in Russian), this would be followed by a robotic prerecorded announcement:

This is a paid commercial broadcast. WSNR does not necessarily endorse the opinions stated.

No shit. And then, a Slavic accented voice:

Do you have ideas or a product to promote? Modern technology allows you to broadcast from your own home! We’ll even install the equipment for you. Call XXX-XXXX to talk about purchasing air time.[6]

Usually, this would be followed by another hour of Brother Stair, and so on, until dawn, before which I usually had passed out. We’ll get back to that offer.

In early December, a new note of urgency appeared. Brother Stair began to worry on the air about the need for more funds, so as to lock in his broadcast contracts for 2018. Lots of money was needed; although I had already begun to wonder about who on Earth was paying for this whole mishegas in the first place. I began to worry. Had Brother Stair run out of time and money? How would the Gospel be preached to the entire world and thus bring about the apocalypse?

And indeed, in mid-December, things changed. Stair’s broadcasts began to clearly be reruns. Reagan is the Beast! Was this an end of year, holidays sort of thing, or had his contracts really run out?

A Google search in the new year clarified things. Brother Stair would not be back, but not for lack of funds.

Even his comeuppance was unique and characteristic. Of course, a previous google search had already revealed his 2004 arrest and brief imprisonment for sexual abuse. But then, that’s come to be expected of evangelists and prophets, even before the current purity panic. No biggie.

Yet Brother Stair was no mere victim swept up in the now-fashionable #MeToo movement. No, he took it up to 11.

Sweet Jesus in a tarpit! Kidnapping? Burglary? Can you imagine Harvey Weinstein stooping to the level of an ill-advised OJ style burglary?

And get this: the assault occurred during one of his holiday liturgical services;[7] and was videotaped (by him) for posting on YouTube.[8]

And so, the Brother Stair show has come to a close.

Make no mistake: Brother R. G. Stair is a first-class scumbag,[9] and the only problem is that at 86, he’s unlikely to get as much punishment – in time or intensity – as he deserves.

But there’s an interesting aside….

Apparently, Brother Stair, thanks to his monetary supporter(s), was largely responsible for keeping old-school media like shortwave alive. Thus,

The business model for some of these SW broadcasters is challenging. Essentially, this is vanity radio. Programmers pay the stations to broadcast their programs. This is different from the public broadcasting and commercial broadcasting models used in the US. I haven’t heard much direct fundraising or more than a few commercials on US SW stations.

They’re sitting out there waiting to give you their [airtime]. Are you gonna take it? Are you man enough to take it? What’s the problem, pal?[11]

[2] Just from memory; I’m sure he was much more articulate than Billy Joel.

[3] First thing I added to my first iPhone!

[4] Like many cult leaders and larpers, Stair relied on a handful of “inside information” to keep his followers in awe; in this case, the Aramaic for “He is coming”, relentlessly repeated on signs on the highway leading to the compound.

[7] Like many Protestant nutjobs, Stair larps as a Hebrew, and celebrates only “biblical” holidays, such as the Feast of Tabernacles (Sukkoth), heaping scorn on “pagan” affairs such as Halloween or Christmas.

[8] Since deleted, of course, although if you have a strong stomach, you can see it here. What was going on in his mind? I suppose, after all, ISIS puts up its beheading and recruiting videos without any problem.

[9] But hey, it’s all relative: Turkey’s state Directorate of Religious Affairs – popularly known as the Diyanet – says that, under Islamic law, girls as young as nine can marry.

[10] “WBCQ in Califas … believes in shortwave radio and will allow stuff that most people won’t. If I don’t like something on the air, I turn the dial. American radio pretty much is garbage, apart from a few community oriented stations I cant receive because they broadcast 10 watts FM in some distant city-the rest is corporate $#!t. Heck I wish I knew how to produce a radio show. I’d rent time on BCQ and get my stuff out to the world, or at least a bigger part of it.” Loc. cit.

The Evolution of Commentary »