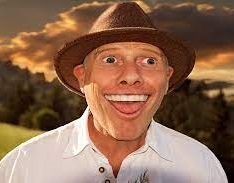 In days gone by during times of economic collapse and social uncertainty, non-white minorities were convenient scapegoats. Looking back on things, some minority groups were actually tremendous scapegoats — they were so effortlessly unlikable that you couldn’t even tell they were being scapegoated. You just naturally assumed they were to blame.

Nowadays, as everything around us falls apart, white people have become the world’s default scapegoats. This turnaround is seen as progress rather than evidence that we’re still stuck performing some prehistoric psychosexual blood ritual where the ancient Hebrews would take a goat out into the desert and, you know, “scape” it or whatever it was those sun-addled desert monkeys did to their goats. I never much followed their religion.

I didn’t even give much thought to being white until you told me I couldn’t, but then suddenly you gave the whole project an unexpected allure. There are a hundred other things I could be doing right now besides being white, but it’s become an all-or-nothing proposition. I’m innocently standing here on the corner, minding my own beeswax and chewing some bubble gum, and they’re all, “Hey, look at that white guy over there chewing the bubble gum.”

They’ve pushed white people to the point where they’re thinking about being white all the time. That sort of thing can backfire. You’ve made white people aware that they’re white — often painfully so — and one day you’ll realize what a dumb mistake that was.

What are we supposed to feel bad about again? Can you kindly refresh my recollection? I mean, major publishers are shitting out books that get celebrated for the fact that they essentially jerk off to the thought of our extinction. That seems a little much, no?

That big, wide rainbow of inveterate white-bashers, a grand coalition that includes many whites and non-whites alike, are absolutely sure that there’s something uniquely wrong with white people, and they are viciously smug about it as well.

And so I ask them: What have white people done that was so bad that no other group would have done it even if they had the technology and the opportunity? You can’t come up with any answer to that because there is no answer to that. Sure, it’s true that no African nation has ever dropped a nuclear bomb on anyone. It is also true that no African has ever developed a weapon as sophisticated as a nuclear bomb, so maybe the main reason that Africans have never dropped nukes on anybody may be entirely unrelated to moral virtue. For the same reasons, it’s not exactly a moral accomplishment to never have invented anything beyond a few exotic strains of peanut butter.

If you want to bring up Hitler, I can bring up the Khmer Rouge, Unit 731, and every square inch of modern Haiti.

On an episode of Curb Your Enthusiasm when a man accused Larry David of being “a self-loathing Jew” for whistling a Wagner melody, Larry responded, “Well, let me tell you something — I do hate myself, but it has nothing to do with being Jewish, okay?”

I think all races are awful to the best of their ability. All races are destructive in the best way they can manage. I think that’s an immensely fair and even-handed way of looking at human nature. I also think it’s nice — too nice.

Clearly, the only answer that would provide the world with even a glimmer of hope that we can avoid some inevitable racial apocalypse is for everyone to just take a deep breath, sigh out slowly, and say, “There’s nothing wrong with white people.”

There’s nothing wrong with white people that’s not wrong with everyone else. You and I know it. And we both know that my plan is the only way to achieve world peace.

But people have a hard time letting their crab claws loose from clutching desperately onto whatever delusion justifies their existence, so the mythology of innate white evil will live forever because it’s protected by a thick force field of cognitive dissonance. Never try to engage in friendly conversation with people who’d stab you in the back the moment they got the chance. There’s no point in proving they’re wrong and you’re right, because they don’t have the gallantry to admit it. It is pointless to attempt engaging them in factual matters. Their entire belief system is propped up on emotions and superstition. Facts will only get in the way. Trying to use facts to prop up your demonic narrative will only convince them that you’re demon-possessed. If logic had any effect on them, they wouldn’t be in the pickle they’re in. You can forget about trying to debate them or persuade them with logic.

So every time they come at me, trying to club me over the head with another rubber mallet forged from white guilt, I yawn so hard that it comes out as a scream.

How long has this nightmare been happening? They slipped all this bullshit right into the center of the mainstream and cemented it there. How did we get to this insane point where whites are the only group not allowed to happily exist as themselves?

Is it possible that white people have been far too nice for their own good?

The more that white people apologize, the less forgiveness they are granted. Think about that.

The more guilt that white people confess to, the less they get forgiven. Ever notice how that works? Why, it’s almost as if the more you invite people to hate you, the more they hate you.

There’s no use in groveling. We’ve actually groveled our way into this mess, so there’s no way we’ll grovel out of it. No one is attractive when they’re constantly apologizing, and it’s rightly interpreted as a sign of weakness rather than virtue.

If white people were one-billionth as racist as is alleged, they wouldn’t allow themselves to be institutionally taunted like this. The bad guys at the beach, the ones who show up on motorcycles wearing leather jackets and wielding switchblades, don’t let themselves get sand routinely kicked in their faces like this; those sort of indignities are for the 90-pound weaklings.

They wouldn’t say the things they say if they didn’t know we’ve been way too nice for far too long.

We’ve been cool. Too cool. Maybe we’ll stop being cool. I don’t want us to start being uncool — just to stop being too cool. In fact, don’t be cool at all, so long as you don’t venture into the realm of the uncool. There are dangers in being too cool. Dangers that you don’t realize until it’s far too late.

This is not a call to violence, for cripes’ sake. It is merely a demand to immediately cease all unnecessary and self-destructive niceness — and to be funny while doing it.

Imagine actually thinking racism is a problem. Imagine thinking the media, the government, and the schools are biased in favor of white people.

With a huge smile flashing all your pearly white teeth, tell them they’re crazy. Because they are. Look right through them as if they don’t even exist, because as individuals, they don’t. Deep in their hearts, there’s nothing deep in their hearts. Remind them that they wouldn’t even have underwear if it weren’t for white people.

I’ve spent a good deal of this crisp autumn evening coming up with insults for white people who try to shame you for being white. You can use any or all of these at your discretion:

“I was thinking about becoming a white supremacist, but then I thought about white people like you who fuck up the whole program.”

“Look, I understand that you think blacks won’t rape and kill you if you badmouth white people, but they will rape and kill you even harder — but you look like the kind of person who would like that sort of thing.”

“Your ancestors would have cried at the very thought of your existence.”

“Your mother went through all the pain of pregnancy and childbirth just to wind up with you?”

These are some lines for non-whites:

“If you’re going to blame me for slavery, you’re also going to have to credit me with inventing the lightbulb. It’s a package deal.”

“There’s a clear reason that God chose you not to be white, but it’s really none of my business.”

“Look, trust me, I understand that it has to be horrible being born non-white and being unable to change that.”

And here are some all-purpose putdowns for people of any race who try to immobilize you with white guilt:

“I’d really like to sit around for another one of your lectures about racial justice, but I need to go home and shave my asshole first.”

“If your sweet, loving parents could have seen what you’d turn into, they would have gladly jerked each other off instead that night.”

Don’t assault or threaten them, no matter how tempting it is. Don’t show the slightest wisp of annoyance or anger at them. Show them only amused pity. Come at them with a torrent of disinterested condescension. Treat them with the guarded condescension with which you’d greet a schizoid homeless person.

And when they start listing off all the things that are wrong with being white, start smiling like they’re crazy and you feel a little bit sorry for them. Then slightly wrinkle your nose as if you smell something unpleasant. Then start making fart sounds whenever they try to speak another word.

Look at them, shrug, and say, “We’ve been so nice to you. You really have no . . . idea . . . how nice we’ve been to you.” And then walk away, leaving them trapped in their incurably lonely misery.

« The Populist Moment, Chapter 1:
Crisis of Representation, Crisis of Democracy