To Punch a Nazi 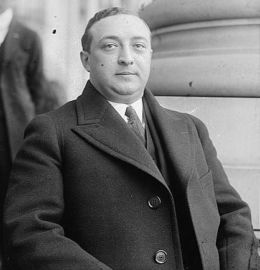 Nathan Perlman, the Jewish New York Congressman who teamed up with Jewish organized crime to take down the German-American Bund in the 1930s.

The expression “Punch a Nazi” originated in early 2017 when then White Nationalist figurehead Richard Spencer was sucker-punched by some cowardly antifa goon while giving an interview. For many months after, the Left crowed about all the glory that comes with punching Nazis while fretting ever so slightly about things such as free speech and freedom of assembly.

It was a pretty sick time that I’m sure many on the Right would prefer to forget, but shortly after that incident, a handful of articles appeared which discussed a time in American history when punching Nazis in the streets was actually a thing. A good thing, according to these articles.

In 1936, Jewish New York Congressman Nathan Perlman was getting annoyed at the success of the newly-formed German-American Bund. Founded that year by naturalized US citizen Fritz Kuhn, who was a German war veteran, the Bund promoted Hitler’s policies, staunchly opposed Communism, and supported American neutrality in the impending war in Europe. They enjoyed growing popularity, especially among German-Americans who vividly remembered the discrimination and abuse they had received from their countrymen during the First World War. Very soon the Bund had 25,000 dues-paying members and was holding rallies across America, especially in the Jewish stronghold of New York City. They looked the part, too, with sharp, military-style uniforms and an insistence upon loyalty and discipline. They were also quite outspoken about the disproportionate control Jews wielded over Christian America.

It’s understandable why Perlman was getting annoyed, but there was little he could do, since the Bund was also very patriotic and law-abiding. Like any other American group, they had every right to march in the streets, give speeches, and distribute propaganda.

And then Perlman got his big idea: Punch a Nazi.

Perlman paid a visit to Jewish mobster Meyer Lansky, a high-IQ lowlife for whom he had great antipathy since Perlman had recently helped to end Prohibition, which had been Lansky’s bread and butter for many years. But as one boychik to another, they got along well enough for Perlman to offer Lansky a job: “Disrupt the meetings and rallies of the Nazi finks and beat ‘em up using whatever weapons you need: clubs, bricks, bats . . . You know the drill. Just don’t kill any of ‘em. We’ll pay you nice for your efforts and give you protection in the courts if you need it.”

Lansky turned down the cash and did the job anyway. He was a mensch that way, apparently. Lucky Luciano and the Italian mafia offered to help, but Lansky turned them down, too, saying that this needed to be a “Jewish fight.”

I don’t know if “fight” is the right word to describe heavily-armed criminals and tough guys ambushing innocent, unsuspecting Americans exercising their First Amendment rights. You be the judge. From All That’s Interesting:

Lansky enlisted fellow mobsters Bugsy Siegel and Mickey Cohen to deploy their men to those locations where Nazi Bund rallies were held. They mainly focused on New York City and attacked Bund leaders and foot soldiers at the rallies, and spread enough fear in other Nazis to foster a reluctance to attend similar events in the future.

The mobsters would even place their attackers in strategic locations before a big speech; after the featured Bund leader or associated speaker began, the attackers would bum rush the stage and bludgeon all of the speakers in front of the crowd.

At the same time, Nazi-punchers would surround the meeting grounds, and then burst in through back entrances or climb fire escapes and beat up stunned members in the crowd. Lansky and Siegel even formed a training organization to teach people how exactly to make these efforts successful.

One of Lansky’s men reported the following incident (from the same article):

The Nazi scumbags were meeting one night on the second floor. Nat Arno and I went upstairs and threw stink bombs into the room where the creeps were. As they came out of the room, running from the horrible odor of the stink bombs and running down the steps to go into the street to escape, our boys were waiting with bats and iron bars. It was like running a gauntlet.

Sadly, these strongarm tactics worked in the short term. What was the Bund to do? Recruit members of the non-existent German mafia to clobber members of the Anti-Defamation League? Perhaps readers can enlighten me in the comments, but I have not found much online on how the Bund responded to this violent anti-German abuse. And all of the sources I’ve found portray the Bund as nothing less than sinister, and therefore deserving of such treatment.

This article reports that some Bund members resorted to relatively low-level violence, as well as to some truth-telling when it came to Jews:

At a meeting at the Germania Club in Lincoln Park that drew 1,000 participants in February 1938, William Kunze, the head of the Bund’s publicity office, declared that Jews, representing 4 percent of the population, controlled the press, radio, movie studios, schools, courts, and finance. Asked how the Bund proposed “to eliminate the Jews,” Kunze urged that legislation could be passed along the lines of those that excluded Asian immigration to the United States, adding that this might not be necessary “if the Jew learns his lesson.” During the meeting, a storm trooper from Glenview smashed a reporter’s camera. Two students were assaulted when they refused to salute the Nazi flag.

The article goes on to describe how Bundists defensively beat protesters whenever they crashed their rallies — and nowhere could I find instances of the Bund sabotaging other rallies in the way Lansky and Perlman did to theirs. In one case, Bund members “violently attacked a Jewish-American protester who charged to the podium as Kuhn was speaking.”

If this is the worst the Bund can be accused of, then compared to Lansky and his Jewish goons, they come out smelling like a rose.

Sadly for the Bund, in 1939 New York Mayor Fiorello La Guardia conspired with then District Attorney and future presidential candidate Thomas Dewey to investigate the Bund’s taxes and — lo and behold! — they found that Fritz Kuhn was embezzling money from the Bund. But of course they did. I don’t care to speculate on the veracity of the prosecution’s case, because if a government is capable of hiring vicious mobsters to violently undermine the First Amendment rights of innocent Americans, then it is capable of framing the high-profile Bundesführer Kuhn. Maybe he was guilty, maybe not. In either case, he was convicted and tossed in jail. After the Second World War, which spelled the end of the German-American Bund, Kuhn was deported back to Germany, where he died in obscurity in 1951.

The injustice that was perpetrated against the German-American Bund is even worse in retrospect when considering the time period. It all happened before the Second World War. The Third Reich had not committed even a fraction of the crimes against humanity that the Soviet Union had. By 1939, the Soviets had already murdered 15 to 20 million of their own citizens in terror famines and the Great Terror. They had unjustly imprisoned millions more in their ghastly gulag system as well. Did Perlman and Lansky conspire to bust heads at events held by the pro-Soviet Communist Party of the United States of America? Did La Guardia and Dewey care to investigate the finances of Congressman Samuel Dickstein, the man who headed the House Committee on Un-American Activities and who harassed German-Americans while on the payroll of Stalin’s murderous secret police, the NKVD? Those people were much greater threats to America than the German-American Bund. The Bund merely opposed anti-Christianity, Communism, war, and the disproportionate Jewish control of America, the latter of which was leading their country toward all of these things during the 1930s. For this, they were attacked and brought down.

We’d like to think that the story ends there, but we know it doesn’t. With the state’s inexcusable malfeasance on display during the 2017 Unite the Right rally in Charlottesville, during the Summer of Floyd in 2020, and again during the January 6, 2021 protest in Washington, DC, we know that the United States government is still perfectly willing to collaborate with thugs in order to quash any form of white identity wherever it appears. But other forms of identity are celebrated, especially the anti-white kind.

The press today blithely ignores this crass double standard as it digs through history for instances of Nazi-punching — while conveniently failing to report that the people who did the punching were much, much worse than their victims.

» A Surprise for Americans Who Move to Mexico