Letter from a Czech Sociologist to the Americans 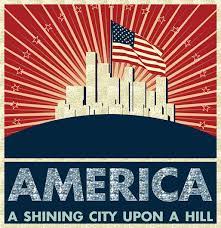 I myself am one of that minority who can see America‘s bright side. I realize that America is not just New York bankers, corporate executives, corrupt senile politicians, university radicals, and other such nasty creatures.

In a sense, it used to be that America represented the best of Western civilization: the ideal of personal freedom, progress, and dynamism, and a chance for everyone. Not a chance to be President, as it’s being distorted today, but rather a chance to have a small house in the suburbs and a decent life. A chance for what was once unattainable for tens of millions of Europeans.

And there is the lower classes‘ self-confidence: a world where a worker can court the daughter of a factory owner, and where the rednecks are proud of their redneckery and make nothing of the aristocracy.

None of these ideals were ever perfectly fulfilled in real life, of course, but America has come closer to it than any other country. The very fact that such an ideal has been articulated shows a certain social shift and an environment that breathed freedom and optimism.

In 2022, we see a breathless empire mired in problems growing worse all the time. Americans are watching helplessly as more and more countries that don’t give a damn about American order develop so fast that they will soon be able to buy America itself. All that is left is America‘s war machine, but even on the battlefields Americans are going from defeat to defeat. Worse, they have lost the ability to learn from their defeats. The debacle in Afghanistan is perhaps the only case in history where there has been no reform of the armed forces following a serious defeat. We could laugh about it — but such moments, when old empires crumble, tend to be the most dangerous moments in history.

Rebuild your industry and your manufacturing capacity. After all, it was your industry that in part decided the outcome of the Second World War: thousands and thousands of factories and millions of people who took pride in their work. Also lots of new ideas. That’s what you need to rebuild! Bring manufacturing back to America. If the companies refuse to do it, then force them to do it in a completely unmarketable way. Or will you only take on the governments of conquered countries rather than your own corporations?

Put freedom back in the universities. Free discussion is the foundation of all progress and the basis of all problem-solving. Stop allowing people to be bullied and ostracized for not being politically correct enough. Is that hard? How are you going to win wars if you can’t tame these pathetic activists?

Give young people a chance in life. What good does it do you to be able to fire missiles halfway around the world when most young Americans hate their own country? Manipulation and stupid ideologies may play a role in this, but mostly it’s that the American economy doesn’t offer enough opportunity. After all, a young man must enter life with confidence that if he works honestly and obeys the laws, he can earn a standard of living that will provide for his family. Does the market not create such opportunities? If not, change the conditions! What are you paying your government to do?

Is it complicated because young people are confused and have no realistic ideas about life? That their ambitions are too distant from actual possibilities? Who is pushing this into their heads? Vladimir Vladimirovich Putin? Xi Jinping? Alexander Lukashenko? Isn’t it your own advertising agencies and your own charlatans? Who should be dealing with this but the Americans themselves?

Protect your own country’s borders. It’s ridiculous to start planning for space wars when any bum with a stick can come into your country and do whatever he wants.

Start protecting the citizens of your own country — not only from criminal acts like mugging or arson, but also from groups that question their children’s gender identity, instill guilt in them for the color of their skin, and who disrupt all areas of life. Don’t you know what to do with them? What do you have the most prisons per capita in the world for?

Deal with the foreigners and the so-called minorities; either evict them or impose your lifestyle and culture on them. Create decent jobs for them and make sure they actually work. Of course you’ll have to pay them fairly, but it will still work out more cheaply than having more little assholes growing up in the suburbs of your cities.

In short, now that you have enough bombers and missiles, it would be more to your advantage to attack New York and Washington than Syria or Russia, or to organize a coup in Venezuela. But the best thing to do, of course, would be to bail out of the international arena altogether. Or are you afraid that Chavez will send warships to your shores? That Putin’s commandos will attack the White House? That Kim Jong-Un’s tank divisions will raid from Mexico? That the Chinese will take an island in your neighborhood? Then let them; you can’t solve everything.

If you fix your country, you will be an attractive role model not only for your own population, but also for their generals and rulers.

My fingers are crossed that you’ll make it. Make “American exceptionalism” something positive and not a deterrent.

« The Truth about the Euromaidan

» Counter-Currents Presents: Nationalism on the Ballot with Neil Kumar, April 3