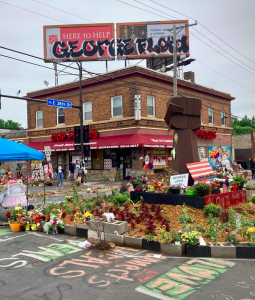 Author’s note: An earlier version of this appeared at Return of Kings as “How Our Government Is Sanctioning A New Kind Of Tyranny.” The following expanded version is in my compilation Deplorable Diatribes.

My first encounter with anarcho-tyranny was when my grandfather got busted in a sting. His “crime” was cutting hair without a license, which got him a fine. Being very pious and impeccably straight-laced, he’s about the last guy you’d think would get a criminal record.

I should mention a few particulars. He was retired and just doing this as a hobby. He had been a barber until retirement, cutting hair since likely well before the arresting officer was born. Furthermore, this was near the border of Mexico, where drug smuggling and human trafficking were rampant. Burglaries were also taking place in that very RV park. It just happened to be more expedient and profitable to bust an old guy for cutting hair — which he certainly knew how to do, despite not having that state’s paperwork — than to go catch some real crooks.

Theodore Dalrymple touched on anarcho-tyranny when he aimed his considerable writing talent at the way parking tickets are disbursed like confetti in Britain. He begins:

The alacrity, efficiency and speed with which monies are collected from certain members of the public are in stark contrast with the incompetence, inefficiency, and waste with which the ends for which the monies are supposedly collected are pursued. In short, the British public administration is a Moloch whose appetite grows with the feeding, and whose only real purpose is to feed itself. Existence and expansion is its very raison d’etre.

Basically, it has nothing to do with public safety; it’s all a big cash cow for the government. Other examples readily spring to mind, such as speed traps. Worse are automated cameras to detect speeding and red-light violations. That’s not really about safety, but rather about playing “gotcha” and fleecing citizens. Still, there’s more to it than that.

The late Sam Francis, who would’ve fit in quite well into today’s alternative right scene, did the most to describe the concept. As he put it, that’s “a kind of Hegelian synthesis of two opposites — anarchy and tyranny.” He explains further:

The elementary concept of anarcho-tyranny is simple enough. History knows of many societies that have succumbed to anarchy when the governing authorities proved incapable of controlling criminals, warlords, rebels, and marauding invaders. Today, that is not the problem in the United States. The government, as any taxpayer (especially delinquent ones) can tell you, shows no sign of collapsing or proving unable to perform its functions. In the United States today, the government works efficiently. Taxes are collected (you bet), the population is counted (sort of), the mail is delivered (sometimes), and countries that never bothered us are invaded and conquered.

Yet, at the same time, the country habitually wallows in a condition that often resembles Thomas Hobbes’ state of nature — nasty, brutish, and short. Crime rates have indeed declined in the last decade or so, but violent crime remains so common in larger cities and their suburbs that both residents and visitors live in a continuous state of fear, if not terror.

He states as an example that we allow illegal aliens to invade our country, yet at the same time, we went out of our way to invade Iraq without due cause.

It’s not just illegal immigration that’s the problem. Ever since Ted Kennedy’s 1965 Immigration Act, the USA has let in people from anywhere with no thought as to how they’ll fit in with the rest of the public. (The European equivalent is the Coudenhove-Kalergi Plan, implemented by Eurocrats such as Angela Merkel the arch-hypocrite.) The public is never consulted about these population replacement policies, of course. When problems happen — 9/11, the Fort Hood shooting, the San Bernadino shooting, the Orlando nightclub shooting, etc. — the answer always is that the government needs more powers (like the Patriot Act) to stop them. How about we stop letting in incompatible people instead?

As Francis further explained, this is a very widespread racket:

What we have in this country today, then, is both anarchy (the failure of the state to enforce the laws) and, at the same time, tyranny — the enforcement of laws by the state for oppressive purposes; the criminalization of the law-abiding and innocent through exorbitant taxation, bureaucratic regulation, the invasion of privacy, and the engineering of social institutions, such as the family and local schools; the imposition of thought control through “sensitivity training” and multiculturalist curricula, “hate crime” laws, gun-control laws that punish or disarm otherwise law-abiding citizens but have no impact on violent criminals who get guns illegally, and a vast labyrinth of other measures. In a word, anarcho-tyranny.

Basically, the government doesn’t make a serious effort to stop real crime, although it’s certainly capable of doing so. Meanwhile, it harasses honest citizens over petty matters. It’s an overreaching nanny state — verging on a police state — with selective enforcement directed at the wrong people.

Some crimes do get taken seriously. Murders will be investigated. The authorities will pull out the stops when politically incorrect motives are involved. On the other hand, don’t expect much effort if you’re the victim of a burglary or mugging. At best, you’ll get a police report for the insurance company.

Today, gangs aren’t exactly the Jets and the Sharks from West Side Story. Now, we have outfits such as the Bloods, the Crips, MS-13, and so forth. They number in tens of thousands each, cross state and sometimes national boundaries, and use social media to organize and coordinate operations. Why does the government tolerate large paramilitary criminal organizations? With our electronic surveillance apparatus beyond the wildest dreams of Stasi or the KGB, they could be rounded up and charged with organized crime overnight. Apparently whoever is running all that has other priorities in mind.

Gangs, rioters, and the presence of urban “no-go zones” seem more befitting of Afghanistan or the outlands of Pakistan. This is symptomatic of a weak state, a Third World country with guerrillas lurking in the jungle, or a medieval kingdom with bandits controlling the highlands. The USA isn’t the only industrialized country where this surreal arrangement exists. Every so often, Muslim rioters erupt from the Parisian banlieues to torch cars and buildings. Britain has seen its share of similar incidents too.

The government seems to have a great deal of tolerance for those who steal with a pen. Sure, the Enron executives were brought to justice. (J. Clifford Baxter “committed suicide” shortly after agreeing to testify. Later, CEO Ken Lay had a convenient “coronary” and was hastily cremated.) Bernie Madoff got sent to Club Fed after his $9 billion Ponzi scheme collapsed. Still, there were no legal consequences for the 2007-2008 financial crisis, which plagues the economy to this day.

There were many opportunities for fraud charges: banks that underwrote liar loans for people who defaulted on their ARMs as soon as the interest rate went up, investment firms selling the shady mortgages as bundled securities, rating agencies certifying these investments as high grade, credit default swap issuers way over their heads, etc. Instead, the banksters that got their fingers burnt with their casino capitalism got bailed out because they’re “too big to fail.”

There’s something to be said for the “broken windows” theory of controlling crime. Mayor Rudy Giuliani did much to improve New York City by going after graffiti, turnstile-jumpers, and the like. However, anarcho-tyranny goes well beyond this by criminalizing trifling things and coming up with new ways to hassle honest citizens. As Tacitus noted two thousand years ago, “When the republic is at its most corrupt, the laws are most numerous.”

Just before the end of this year’s legislative session, the Maryland lawmakers passed several new laws that (a) allow policemen to stop drivers for not wearing seat belts, (b) authorize hidden cameras at red lights to take secret photographs of the license plates of cars that run the lights, (c) ban loud car stereos on state roads, (d) forbid minors from buying butane lighters because they might inhale the gas, and (e) require drivers whose windshield wipers are running to keep their headlights on. The lawmakers seem to have missed outlawing cooking breakfast in your underwear, but of course there’s always another session next year.

The citizens of Maryland will no doubt be thrilled to learn that law enforcement in their state has now so mastered violent crime that the cops have little else to do but round up non-seat-belt wearers and butane-sniffers. As a matter of fact, Maryland’s Prince George’s County has just announced that rapes and homicides increased in the first three months of 1997. Nevertheless, you can be certain that no one will be raped or murdered without wearing a seat belt.

Indeed, Maryland is a prime offender. One of my friends got pulled over three times for trivialities shortly after moving there. Later, I was driving him around while visiting, and he warned me not to pull out so soon from stop signs. I replied, “I’ve been waiting five seconds. Should I wait ten?”

The campus rape witch hunts are another prime example. As directed by the Obama administration, guys can get thrown out of college on no more than an allegation, subject to the findings of tribunals and without due process protections. If actual crimes are taking place, why are they being handled that way? Too many famous cases turned out to be groundless. Not only are the lives of the falsely accused ruined, it’s simply a bad idea to trivialize a serious crime like that.

Gun control is yet another example of anarcho-tyranny. Some debate the existence of natural rights, but the fact is that survival is encoded into our DNA to be our first priority. American citizens who seek to be as well-armed as the bad guys must deal with a lot of red tape first. The more Left-leaning the locale, the more onerous and restrictive this is. Many other countries forbid private ownership of guns. After Britain did so, crimes involving guns increased drastically, and the incidence of home invasions skyrocketed. So what’s going on here — is it just pointy-headed liberals worried about muggers getting themselves shot? Or do those pushing gun control want the public scared, dependent, and disarmed?

The government gets a lot from anarcho-tyranny. This includes:

Ancillary parties benefit too, such as propaganda groups delivering “sensitivity training” and multicultural curricula (as Sam Francis mentioned), activists, foundations, “watchdog” outfits, and so forth. All told, it’s a hell of a racket for both The System and The Hive.

Wherever anarcho-tyranny is found, that’s evidence that the government has its priorities way out of order and isn’t working for your interests. Unfortunately, this trend is still rising. The greatest problem with soft despotism is that it could lead to hardcore despotism.