An Interview with Béla Incze: The Man Who Destroyed a BLM Statue 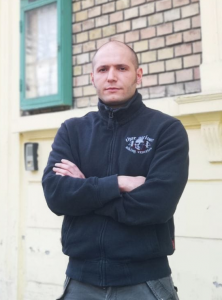 Editor’s note: This is a translation of an interview originally published in Vasárnap with Béla Incze. We would like to thank Tamás Fehér for this translation.

By Good Friday morning, the BLM statue unveiled in Ferencváros [in Budapest, Hungary] was no longer standing. We spoke with Béla Incze, one of the leaders of the Légió Hungária (Hungarian Legion) about what had motivated his actions. He also said a few words about how people with conservative sentiments felt about what had happened and BLM in general.

Kristóf Trombitás: This provocation masquerading as a piece of art had been unveiled on Maundy Thursday [April 1], but by Good Friday [April 2] morning it was gone. Did you anticipate retaliation so soon after the deed? Can you tell us how the events unfolded?

Béla Incze: In this case, I would like to speak on my behalf only and not for the other members of the Hungarian Legion. When I heard that this statue had been erected, I immediately made the decision that insofar as I could be the first person to get there I would topple it and then give myself up to the police. This was the first thing that popped into my head upon reading the news about the statue. The only thing that changed was that we arrived at the site at the same time as the Mi Hazánk Mozgalom (Our Homeland Movement). Together we came to an agreement on the next steps. Neither the Hungarian Legion nor I wished to obstruct the Our Homeland Movement in any way. We agreed to let them set up their screen and even gave them a hand. Of course, we did this knowing that the screen would not remain there and I would eventually execute my plan.

When the Hungarian Legion was founded, we declared that we would not form an official alliance with any political party, a stance we have strictly followed. Our cooperation with the Our Homeland Movement was not preceded by any prior coordination. It arose out of circumstance. We decided on the spot that the Hungarian national interest overrode the interests of any movement or political party.

KT: How soon after the toppling of the statue did official proceedings against you begin?

BI: A police car was parked about thirty meters from the statue, and by the time I walked over to it, the officers sitting inside had already rolled down their windows to let me know they were there. I approached the police car with no intention of running away and avoiding arrest. The video we recorded shows the statue being toppled and me walking over to the police car with my arms outstretched. The officers asked me if I wanted to run away or resist, to which I answered neither. I did not wish to flee or act as if I were not responsible for my actions. That was the plan. 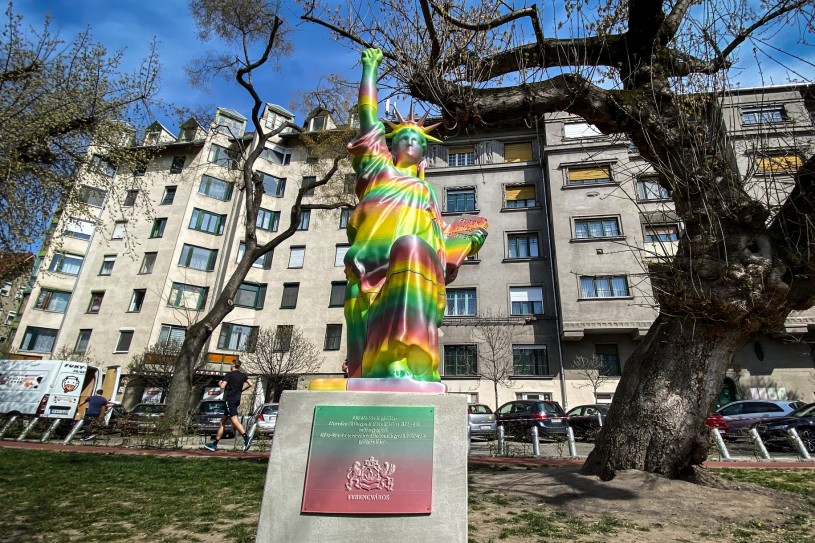 The statue before it was destroyed by Incze

BI: I was treated absolutely fairly by both the officers on patrol and everyone at the 9th District Police Station. In terms of filth, the holding cell where I was put approximated African conditions, but I would not want criminals to receive better. I ended up there on account of having expressed a political opinion. I did not enjoy it, but it is what criminals deserve.

KT: What do you have to say about how a rather significant part of the Right-wing/conservative public, unsurprisingly, has immediately assessed your action as having served the interests of the provocateurs? They argue that one should not answer provocation with counter-provocation because Western media outlets and organizations will seize upon it and once again write myriad articles about how Hungary has a serious problem with far-Right violence.

BI: Let me answer in two parts. On the one hand, the sculptor himself and Krisztina Baranyi, the mayor of the district, both said on multiple occasions that they recognized that the statue would be defaced. In a way, they had set a public relations trap for anyone who dared to take steps against it.

Nonetheless, I do not think that the right answer was to ignore it. Over the past decade or so, using the LGBTQ lobby as an example, we have seen where that leads. Ignoring them makes them more powerful.

If the door is left ajar, these movements first stick their foot in, so to speak, and then their knees, until finally, they kick the door in. Even if they set a public relations trap, we should not be afraid to act. We should respond as befits a man, i.e., a man of the Right. To act or not to act should not be guided by what the Left desires, but rather by what the Right dictates on a metapolitical level. In my case, the meta morphed into action, and anyone with the intelligence to understand the metapolitical background could see it with his own eyes. And if anyone does not see it, he should open his eyes.

I am neither pro-government, nor obviously a supporter of the Left-wing opposition. I choose to remain above the fray of day-to-day political battles. On the other hand, I fail to see how my action has either improved or diminished Hungary’s standing in Western Europe. Our homeland has routinely been categorized as an Eastern / Central European state where the vast majority of the citizenry does not look favorably upon the endeavors of BLM, the LGBTQ movement, or any other similarly subversive organization.

My actions against the statue expressed the feelings of the average Hungarian.

« The Importance of Survival Skills

» London: No City for White Men