The Uppity White Folks Manifesto, Part 3: Medicare for All Plus Slurs 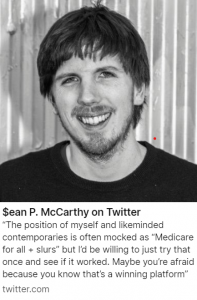 If you are ready for white identity politics but not ready for the ethnostate, that means that you are committed to a form of multiculturalism that works for your people, the founding stock of your nation: Hungarians in Hungary, Frenchmen in France, Swedes in Sweden, white Americans in America, etc. But how do we get there from here?

The first step is to articulate a clear goal: a state that secures a homeland for your people. That means, at minimum, two things: (1) demographic policies to maintain a supermajority and (2) making your language and culture normative, even for outsiders. The next step is to put together a winning political coalition to gain the power needed to enact these policies. However, that might prove surprisingly easy. It may be as simple as giving the people what they already want.

A very large chunk of the electorate in most white countries is “populist.” Populists have two main traits. First, they are somewhat socially conservative and patriotic. Second, they want an interventionist state to protect the interests of the working and middle classes from the elites. Thus they favor social safety nets and barriers to economic globalization.

Our ruling elites want the exact opposite: social liberalism and globalism, including economic globalization, which enriches the elites by allowing them access to cheap labor through both immigration and offshoring.

The current political system is perfectly calibrated to maintain the illusion of democracy while consistently not giving the people what they want: social conservatism and the interventionist state. Instead, the political system reliably gives the elites more of what they want: social liberalism and globalization. This elite consensus is often called “neoliberalism.” Jonathan Bowden described it as a Left-wing oligarchy, a hyper-stratified form of capitalism married to Left-wing identity politics, which is no longer about promoting socialism for the working class. Instead, it is about promoting upward mobility within capitalism for previously marginalized groups.

A system in which the majority get none of what they want, all the time cannot be seriously described as a democracy.

But as long as the people have the right to vote, we can change this system. Let’s look at some numbers. The populist voting bloc varies from country to country. It also varies depending on how one measures it. A 2015 study of the American electorate by Lee Drutman is highly suggestive. [1] Drutman mapped voters on two axes: their attitudes toward Social Security (a welfare-state measure highly popular among working- and middle-class voters) and immigration (a key trait of globalization).

Identitarian populists already have the largest voting bloc on our side: 40.3%. All we need is to win over 10% more of the electorate from liberals and moderates. This should be possible because they want contradictory things: both immigration and Social Security, or, more broadly: both globalization and an interventionist state that promotes the interests of the masses.

The economic consequences of globalization are clear to anyone who knows basic microeconomics. [2] It should be possible to convince moderates and even some liberals and Leftists that they want incompatible things. Then we must force them to choose. If forced to choose, most will choose First-World prosperity and the welfare state over globalization. But we don’t even need to convince the majority of them. Based on Drutman’s poll, we need to convince only one in five liberals and moderates to create a solid electoral majority. We can do that.

I have two caveats about Drutman’s analysis.

First, elections are naturally fought on more than just two issues. But if you were to poll the electorate on their attitudes toward the welfare state and free trade, or government healthcare and political correctness, or environmental regulations and interventionist foreign policy, you would find roughly the same breakdowns. Populists want a strong welfare state plus less free trade. They want government healthcare and less political correctness. They want a cleaner environment and an America-first foreign policy. In sum, populists want nationalism, patriotism, and social conservatism plus an interventionist state that looks out for the majority.

Second, Drutman’s issues — Social Security and immigration — can be analyzed purely in economic populist terms. But, as Roger Eatwell and Matthew Goodwin argue in National Populism, economics is not the sole force driving the rise of national populism. Today’s populists don’t oppose immigration simply because it lowers wages. They also oppose it for identitarian reasons. Immigration is changing their homelands beyond recognition. It is endangering the future of their nations. Thus they want it stopped. Identity, moreover, is not just a contributing factor in modern populism. For many, it is the decisive factor. Indeed, many people would prefer to preserve their national identity and sovereignty even if it makes them less prosperous. By emphasizing identity as well as economics, an identitarian populist movement can appeal to more people and also motivate them to sacrifice economically for its cause.

What would an American identitarian populist movement offer the Right? Patriotism. Social conservatism. An end to political correctness. An America-first foreign policy, which means fewer wars. It would not offer the Right more libertarian economics (including open borders) and neoconservative global interventionism. But those views are unpopular even on the Right.

What would an American populist movement offer the center and the Left? State intervention in the economy, including a welfare state, to help the working and middle classes. Environmentalism. Massive spending on education, infrastructure, and research and development, including space exploration. An America-first foreign policy, which means fewer wars. It would not offer the Left open borders, political correctness, and anti-white identity politics. But those are not all that popular even on the Left. In short, identitarian populism would give the Left “Medicare for all plus slurs,” a phrase that was coined as a parody but sounds like a platform to me.

Conventional free-market Rightists reject a Scandinavian-style welfare state in America because they fear it would become a fiscal black hole. From a populist point of view, that would be a virtue. A new raft of highly popular entitlements could be used to suck dry centers of elite power: the military-industrial complex, big business, and academia.

One could fund a welfare state through tariffs on foreign manufactured goods and confiscatory taxation of the super-rich, especially those who made their fortunes through outsourcing and open borders. An insatiable welfare state could be used to defund foreign aid, interventions, and wars. It could also gobble up subsidies to higher education. Finally, to keep such a welfare state sustainable, a nation would have to close its borders and repatriate tens of millions of illegal immigrants. That’s a plan worth trusting.

This is just a sketch of how an identitarian populist movement could mobilize tens of millions of uppity white Americans who think some form of white identity politics is necessary and moral, even though they are not ready to consider more radical White Nationalist positions like the ethnostate. But these people are still rejected by the political establishment, which holds that identity politics for whites — and only whites — is simply immoral.

Tens of millions of white Americans have no political representation. They increasingly understand that the political system is not just designed to ignore them but to replace them. They are angry and searching for alternatives. This presents an enormous opportunity to talented and ambitious political outsiders. Whoever mobilizes these millions will write the next chapter in the history of American populism.

[2] For more on this, see my essay “The End of Globalization” in Truth, Justice, & a Nice White Country (San Francisco: Counter-Currents, 2015).

« The Plymouth 400 SymposiumWhen the Sons of the Mayflower Struck Back