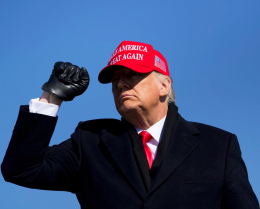 In 2016, Donald Trump ran as a populist and won. In 2020, his bid for re-election followed the standard Republican playbook. There was a lot of talk about the stock market, very little populist talk about immigration, globalization, and protectionism. There was a good deal of conservative culture war rhetoric to mobilize patriots and evangelicals. Finally, there was a huge amount of pandering to blacks, Jews, Hispanics, Asians, and homosexuals: identity politics for everyone but whites. But Trump’s white base — especially the white, working-class swing voters who put him over the top in the Midwest — were basically taken for granted.

For race-conscious whites, it was infuriating. Naturally, a lot of us decided that maybe we should sit this election out and show Trump that we are not going to be taken for granted. The Republicans are going to have to engage in white identity politics if they are to get white votes. Maybe if we tank Trump’s reelection and deliver the Senate to the Democrats as well, they’ll finally take us seriously. Time for a Whexit.

“Whexit” means “white exit.” But I am speaking specifically of a Whexit of racially-conscious whites, /ourguys/. This idea is being especially championed in wignat quarters of the movement. “Wignat” stands for “wigger nationalist” and refers to White Nationalists who are handicapped by low IQs and high time preferences. Of course not every White Nationalist who thinks this way is a wignat, but there’s a strong correlation.

Is a White Nationalist Whexit going to work?

Why do Republicans pander to non-whites but scrupulously avoid addressing specifically white interests? The moral consensus in America today is that racism is the worst thing in the world, but only for white people. Republicans follow that code to the letter, hence they are willing to appeal to the identities and collective interest of Jews, blacks, and other groups, but they will never explicitly address the identity and interests of whites. In our case, the best we can hope for is that our identity and interests will be subsumed under the national interest or the rights of mankind as a whole.

Does this help the Republicans at the polls? Yes. Does it gain them minority votes? Probably a few, and in close races, even a shift of a fraction of a percent of non-white votes can put Republicans over the top.

But wouldn’t Republicans gain even more votes if they followed the Sailer strategy and just focused on increasing their share of the white vote, perhaps by making explicit appeals to white identity politics?

The Republicans obviously think not. Why? The moral consensus in America today is that racism is the worst possible thing, but only for whites. Thus it is enormously important for one’s reputation to demonstrate that one is not a racist. That is why Republicans both pander to non-whites and scrupulously avoid explicit appeals to white interests.

Republicans probably also think that a visible Whexit of race-conscious whites would help their reputation and boost their support among white normies. Indeed, there was probably rejoicing at Trump campaign headquarters when Richard Spencer endorsed Joe Biden. Republicans don’t want the support of racist whites. They probably think that the Alt-Right cost Trump more votes than it gained him, both by turning off Republicans and energizing the Left. You know damn well that’s what Republican campaign strategists told Trump. They might have even told the truth.

For the sake of argument, however, let’s consider the possibility that a Whexit might actually hurt the Republicans. If we really can hurt them, won’t that change their calculations? People, after all, learn from suffering. That’s why we spank naughty children.

But human psychology is more complicated than that, particularly when morality gets involved. If people merely acted out of rational self-interest, then a race-conscious Whexit might indeed change Republican calculations in future elections.

But this argument leaves out the whole reason we are in this situation in the first place: the moral consensus that appealing to white ethnic interests, and only white ethnic interests, is simply evil. Normie Republicans regard us as evil. They would rather lose without us than win with us. Simply hurting them will not change their minds, because people will put up with quite a lot of suffering if they think it is moral.

Obviously, the only way to change Republican behavior is to attack the anti-racist moral consensus that lies behind it. But changing the moral consensus of society is a metapolitical task, not a political one. Until anti-white racism loses moral power, racially-conscious whites will not gain political power.

Talk of a race-conscious Whexit seems to be premised on the claim that “the Alt-Right memed Trump into the White House.” If we managed to elect Trump, they reason, then we can also defeat him.

This argument is a tissue of delusion and puffery. The proper response came from Innsmouth Elle Reeve when she told Richard Spencer, “I think you’re a fraud.” The claim we put Trump in the White House is not based on any factual analysis of the electorate or the actual election results. We don’t know how many White Nationalists are out there, where they are located, or how politically active they are. We are an unknown quantity, so the Republicans can hardly factor us into their calculations.

But they can very plausibly claim that we were a net detriment to Trump because we turned off some Republicans and energized Democrats to vote against him. They may even have data to support it. Until we do actual studies of the electorate, we cannot refute them or make any plausible claims about our electoral clout. And, even if we could, the Republicans would still prefer to lose without us rather than win with us.

The only thing that will change that is a moral revolution. Until then, all white political organizing will be impeded by a gale-force moral headwind, and wignat talk of Whexit is just spitting into it.

Race-conscious whites are not going to change Republican voting patterns by staying at home and pretending they are “exercising power.” Again, we are not going to gain political power without overthrowing the moral consensus that white racism, and only white racism, is the wickedest thing in the world. That’s a metapolitical task. It requires changing people’s minds. It is an educational project, which requires that we stay online and able to reach the public.

This is why online freedom is under attack from Leftist-controlled corporations. But we still have the first amendment. Trump should have done something about tech censorship years ago. He has made some efforts to protect online freedom, but too little too late. It could cost him the election. If Biden is elected, however, we can expect erosion of the first amendment and no relief on tech censorship. This is one of the main reasons why it is crucially important for White Nationalists to re-elect Trump.

The other crucial reason is that Trump has slowed white demographic decline, which buys us time. We need to convert anti-whites to pro-whites. If we can get enough people on our side, we can save our race in America. Trump gives us more time to do that, while Biden will speed up the Great Replacement by opening the borders and putting tens of millions of illegals on the path to citizenship and voting. The goal of the Left is to make any form of white populist resistance electorally impossible. Racially aware whites would have to be stupid, crazy, or evil to support that.

Don’t be a chump. Vote Trump.

» Counter-Currents Radio Podcast No. 299 Gregory Hood on the Election