Interview with Spencer J. Quinn on My Mirror Tells A Story 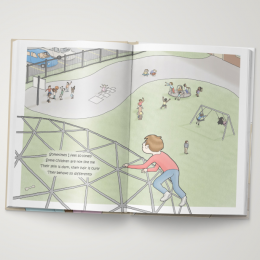 Greg Johnson: How did you come up with the idea for this book?

Spencer Quinn: I had just started writing for Counter-Currents in 2016, and I was kicking around for novel ways to get our message across. At that time most of us were on social media, and so after a few months I felt fairly certain that the idea of a Dissident Right children’s book wasn’t being widely discussed. I then went into a Barnes and Noble to investigate how political and “woke” children’s books have become, because I had a feeling it was pretty bad. My suspicions proved correct. Along with the politically correct sermonizing one would expect in this kind of literature, some books actively encouraged non-white identity. In some cases, this was a somewhat hostile identity. I remember one board book in which a black toddler raises his fist in a black power salute.

I thought, “Yeah, we gotta come up with an answer to this.”

Fortunately, Greg Johnson liked the idea and encouraged me to come up with a story, which I did. He put me in touch with Anthony Coulter, and the rest is history.

What is the basic message you want readers to take away?

Well, one could say it’s okay to be white. That’s certainly a big part of it. But My Mirror Tells a Story delves back into time to instill not just a racial identity among white children, but racial pride as well. The book delivers a sense of the sheer magnitude of white history and how the modern world would be so much less without it.

The book addresses contemporary anti-white racism as it appears in a school setting. It addresses race realism as well, but gently. It does so in part by demonstrating how multiracialism leads to disorder. Essentially, I tried to coalesce Dissident Right ideas into a narrative that small children can understand.

The book certainly isn’t hidebound. It teaches white children to be kind and understanding of others while remaining proud of themselves. But it instills a sense of exclusivity among white children — a radical departure from today’s anti-white norms. This book is meant for white children only. Non-whites and even mixed-race children will get very little from it. This is by design.

I remember pondering the very nature of the book, and the idea occurred to me that we can see our own history in the mirror. We are, in fact, products of history, and we should never let the history of our people escape us. It’s a glorious history.

For those who want to read more about my thoughts on My Mirror Tells a Story and children’s literature in general, check out an article I wrote for Counter-Currents in 2018 called “Chicken Sunday for White Nationalism.”

What age group is it directed to?

Little kids, for sure. The story is told entirely in verse, with a simple ABCB rhyme scheme. It’s meant to be heard rather than read by a child. I imagine that a parent would sit a child on their lap and read it to them. So, I would say the age group for My Mirror Tells a Story falls into the two-to-five range.

Were you influenced by any other children’s books?

Perhaps. It’s hard to say. Certainly, I was motivated by the books I saw at Barnes and Noble. It seemed as if the Left has been outflanking us in this regard, and so I felt a sense of urgency. But as for influences, I have read countless books to my children, and so the very idea of a children’s book came naturally to me.

I think all great children’s books have to have an “uh-oh” moment in which there is some great intrusion upon the story. Examples include Curious George flooding the Man With the Yellow Hat’s office, or Danny realizing that the Dinosaur at the museum is talking to him, or, more recently, Karma Wilson’s Bear sneezing all over his uninvited dinner guests. My Mirror Tells a Story has a similar moment, a moment in which the parent reading the book can gasp, look at the child, and say, “uh-oh.”

Of course, My Mirror Tells a Story takes place in the real world, so this “uh-oh” moment carries a bit more weight than the above examples. I wish it didn’t have to, but with children’s books being produced by the Left today also taking place in the real world (and being given a default anti-white or pro-non-white spin), it’s not like whites have a choice. I would like to write a conservative children’s book that leaves out race and deals with more generic and implicitly pro-white values such as tradition, family, and patriotism. But whites really don’t have time for that anymore, do we?

Do you want to try your hand at young adult fiction someday?

Yes, but where’s the time? I am working on concurrent projects for grown-up books right now. I think I could find the time for more children’s books. I have two ideas I’d like to pursue. After my writing schedule clears, I do have a detective mystery kind of story I’d like to develop for young adults. Of course, there will be a racial angle. Stay tuned.

In the meantime, check out Blut and Boden and A Race for the North by Ash Donaldson (my reviews here and here). Donaldson’s got the YA fiction thing under control.

Did the illustration phase lead to any changes in the story?

Certainly. Working with Anthony was great. He made the pages dealing with inventions and the Founding Fathers really come alive — better than I had envisioned them. The boy climbing on the monkey bar dome was his idea, and I love the perspective upon the playground it provides. I gave him general instructions on the classroom scene in which the teacher teaches about slavery and oppression, and he made it sparkle.

Do you think race-conscious comics and graphic novels are a promising genre to develop?

I think so. We can’t let Vox Day hog the market on those, can we? Seriously, I could be interested in such a project. If an artist approaches me with an intriguing idea and wants a script developed I would definitely consider it. In general, however, comics are the next step, especially given how the pathetically “woke” versions of DC and Marvel have been hemorrhaging readers by the thousands. I imagine there are quite a few young men out there who would love to experience our stories in comic form.

What effect do you hope this book has?

Of course, I would like for white children to be entertained and inspired by this story. A lot of that depends on how their parents interact with it and how often they read it to them. I figure there might be many positive reactions to the book since there is literally nothing like it in the world today.

Another effect I hope My Mirror Tells a Story has is to raise the morale of young white parents. In fact, I see that as a big part of my job as a writer in general: to keep morale up among people like me. I don’t need to see tangible changes taking place in real time as a result of my writing (although that would be wonderful). If people out there feel even slightly better about themselves after having read me, or maybe even just a little bit less lonely, then I feel like I’ve done my job.

It’s no different for My Mirror Tells a Story.

« The Counter-Currents 2020 Fundraiser Amnesty Your Ancestors