Ash Donaldson’s A Race for the North 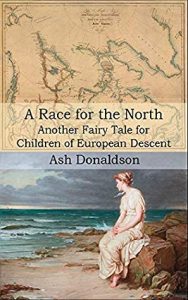 Ash Donaldson
A Race for the North: Another Fairy Tale for Children of European Descent
Self-published, 2019

What better way to inoculate young minds against the degeneracy of the modern world than by telling new stories and making these stories look old? Young white kids need a past they can hold on to and be proud of; such a thing is crucial for the development of a positive identity. Ash Donaldson started this project in 2018 with his excellent children’s story Blut and Boden, and now follows up with a sequel, A Race for the North: Another Fairy Tale for Children of European Descent.

In Donaldson’s mythos, which is equal parts Joseph Campbell and J. R. R. Tolkien, ancient races of elves, dwarves, and giants represent elemental aspects of our world and our souls. Storm giants, for example, represent what is violent and destructive in men and also the great winters that caused the last Ice Age. Before the advent of men, these races often did battle, with the storm giants routing the elves in North America and sending their great prince, Boden, fleeing to Europe. There, the elves managed to defeat the storm giants (an allegory for the retreating glaciers after the Ice Age) with the help of humans. As I wrote in my previous review:

A younger race, the humans, assist them; but not all humans dare to do so. Only the hardiest, strongest, and noblest humans have what it takes to stand alongside the elves. These are the Aryans, the sons of Arius. These are the white humans.

This new story departs from Blut and Boden by having a structure which is perhaps more historical than fantastic. Where Blut and Boden teases us with snippets of history in which members of these elemental races assist or harm humanity, Race for the North begins in a fixed place and time: Onboard the HMS Erebus with Sir John Franklin in 1845. Franklin is searching for a Northwest Passage to Asia, and his love for his wife Jane propels him further on, even as ice is closing in on all sides.

Keeping spoilers to a minimum, what Franklin – and later, another fearless soul named Elisha Kent Kane – finds in the frozen Arctic tundra is a connection between modern man and the Earth’s primordial past: a beautiful elf maiden named Nimue who has been trapped by storm giants and is searching for a magic ring. It is this magic ring which allows the elf maiden to escape and travel to the British Isles. There, she calls for a young man who will breathe memory and courage into the sons of Arius, who are forgetting who they are and how to be brave.

This boy, an escapee from a malignant factory in Manchester named Arthur, is sent on a quest by Nimue, and on his journey meets famous artists, writers, and musicians throughout Europe. As in Blut and Boden, Donaldson fills the pages of A Race for the North with paintings, maps, and photographs, not only to assist in the storytelling but to inspire young readers by showing who these great men were and what they accomplished. And each shares a tremendous concern: that the soul of Europe is being lost in its rapid industrialization.

The author makes it abundantly clear that the whites of the West were losing their sense of vigor and romance:

As she walked through the town nearby, it was clear to Nimue that Elisha and John were men of the past. A new day was dawning, with a fierce light that drove away everything that was not efficient or profitable. It was a new world, run by small-minded men, an age of finance and not valiance, an age of captains of industry rather than captains of men. It was a world with no magic and little spirit, nothing like the spirit of Elisha and the magic of the ring he sought.

She returned to the castle and followed the stream that ran east of it, the Afon Ogwen, on up into the mountains. Here, the stream flowed out of a lake, and in that lake, with her keen-elf eyes she could see a sword. With such a sword, could the spirit be rekindled?

Upon this realization, Nimue becomes the famous “Lady of the Lake” and calls for young Arthur to take the sword, and with it, revitalize Europe. The introduction of Arthurian legends into A Race for the North is another way in which it distinguishes itself from Blut and Boden.

Yet another is Donaldson’s chapter on the villain Karl Marx. Donaldson portrays him as an outsider in Europe, a stranger in a strange land who wishes to transform this land into something unrecognizable through a thoroughly malicious ideology. As Donaldson describes it:

He is not of the sons of Arius, and he feels only contempt for the world they have made. But here, in the library, he can order ideas about the way he wished he could order men about, to make them do as he wishes. It is a world that exists only in his mind, but how to make it become reality? That is the question that troubles him.

Then, a storm giant appears and grants young Marx the power and energy to pursue his dreams of corrupting Europe. Marx then has visions of “rivers of blood” and of the gulag in which “those who disagree with his plan are worked to death.” He also envisions the great march of Marxism through the institutions of the West, such as its schools, churches, newspapers, and universities. This indeed becomes the “specter” which will soon haunt Europe.

And we see this during Arthur’s quest. Nimue sends him across Europe to the banks of the Rhine, where he will deliver her sword to a mysterious Wanderer. Through the artists and writers he meets, he sees how even back then Europeans were turning away from beauty and their own heritage. These creative people are resisting this and making lasting works, but Arthur envisions how this general listlessness will eventually allow Europe to be subjugated by Marx’s followers. He envisions how the great cities of Europe will surrender to outsiders without a fight, making the sons of Arius minorities in their own homelands. Many elements of history are merely hinted at, but subtly enough for grown-ups to catch. Examples include the ugliness of postmodern art and architecture.

A Race for the North focuses on the importance of art and creativity, more so than Blut and Boden. Arthur eventually meets a great man above the banks of the Rhine. This Wanderer, a real-life artist of the highest caliber, is world-renown and influential, but his career at that moment is at low ebb. He doubts he can continue. When Arthur presents him Nimue’s sword, only the hilt remains. Parts of it had been disseminated to the other creative men Arthur had met across Europe. This sword clearly represents the restless and fearless spirit of European Man, as embodied first and foremost in his artists. The Wanderer takes the sword (and along with it Arthur’s own story), and quickly the sword becomes him. The Wanderer is reinvigorated and, for those of us who know his history, goes on to create great works.

But for Arthur, Donaldson has this to say:

And you, Arthur, you felt a prick when you bundled up the sword just now, where the shattered blade’s edge cut just a little. Now you see the drop of blood on your finger, and you place it in your mouth without thinking. Why do you do it? Is your blood precious to you? It should be, for it is the line that connects you to those who came before, who sweated and strove, tilled and toiled, birthed and battled, all so that you might stand here. Locked in the sacred mystery of your blood is all that you have come from, all that you are, and all you could yet become.

A Race for the North imparts above all else the great kinship shared by the white European peoples. It depicts how foreign and destructive ideologies have threatened this kinship and led to horrific, fratricidal wars. It also shares how this kinship has led Europeans to develop great civilizations. But beneath it all, it is about blood and race. No youngster reading this book can finish it and reach any other conclusion. In fact, the perceptive reader will note how this idea is hidden in the book’s very title. White people today really are in a race for the North. It’s a race against time before the inheritors of Marx and their Third World foot soldiers disinherit the sons of Arius from it and their own birthright. Beyond that, whites themselves are the race that is suitable for the North. We belong here, Donaldson tells us. The North is our home. We have no other. This is something that Elisha envisions when he travels through the frozen tundra of North America:

He came across petrified trees, ancient trunks of wood that had turned to stone with the passage of time. Here, it seems, had once been green forests and warm air, a garden paradise teeming with life. Had his own race, he wondered, once lived far north in such a place?

Perhaps in legend they did. And with enough young people absorbing modern legends such as A Race for the North, whites will continue to do so indefinitely.