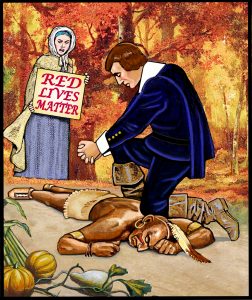 I’m not much of a holiday-celebratin’ guy, but if I had to pick my favorite, it would probably be Thanksgiving, and merely for the basic gustatory pleasures it provides. I could eat turkey, stuffing, and sweet potatoes three times a day for the rest of my life and never tire of it.

But as with everything these days, there are legions of carcinogenically bitter social-justice scolds who have made it their fundamental project to squeeze the fun out of everything as if they wake up every morning hoping to choke a baby piglet to death.

Instead of living and letting others live on Thanksgiving, a killjoy named Professor Robert Jensen of the University of Texas recommends a day of guilt and self-imposed starvation:

“One indication of moral progress in the United States would be the replacement of Thanksgiving Day and its self-indulgent family feasting with a National Day of Atonement accompanied by a self-reflective collective fasting.”

If “moral progress” involves an endless spiral of self-imposed misery, I’d like to morally revert to the Stone Age — please pass the racist cranberry sauce.

In an essay titled “TEN WAYS TO MAKE YOUR THANKSGIVING ABOUT SOCIAL AND ENVIRONMENTAL JUSTICE,” a certain Eve Bratman likewise urges a no-fun, no-food day of self-flagellation:

“Let’s face it: white supremacy is actually deeply embedded in Thanksgiving. . . . I want to make this Thanksgiving more deeply anti-racist, ecologically rooted, and anti-imperialist. . . . Consider a national day of atonement to mark the holiday. That might involve some fasting, instead of feasting.”

That sounds like a great idea, Eve. But I’d like to up the ante for you: You won’t prove to me that you’re completely committed to social justice until you fast for five years straight. That’s right — not even a crumb or morsel of food until Thanksgiving 2025. If you refuse, you are complicit in the genocide of Native Americans.

If you search the words “racist” and “Thanksgiving” in tandem, you’ll be able to suffer through hundreds if not thousands of similarly miserable revisionist accounts. Instead of Thanksgiving, many dour redskins celebrate a “Day of Mourning,” which sounds like a real humdinger of a time. Out on Alcatraz on the fourth Thursday of every November, the benighted descendants of indigenous yam-diggers honor “Un-Thanksgiving Day,” which seems like a slap in the face to the white man for not stomping out every last one of these ingrates.

Dredging ancient memories of what I was taught about Thanksgiving, it seems to portray the Injuns as selfless altruists who offered food and comfort to the bloodthirsty cannibal Pilgrims. It seems quite kind to the Indians — almost unrealistically so. Why would any modern meth-smoking red man who lives in a trailer on a reservation and receives government checks merely due to his race take offense to this narrative?

More than anything, we are clubbed like baby seals with the idea that the white man “stole” land from the peaceful and advanced red man.

Well, OK, sure, great, but why was it so easy to “steal” their lands? (Hint: It wasn’t easy. In fact, it was brutal and bloody, and an estimated third of Massachusetts settlers were murdered by America’s Original Peaceful Protesters in the process, but let’s just cut to the chase here.)

In a hyperbolic bout of kvetching called “The Vicious Reality Behind the Thanksgiving Myth,” a feller who goes by the name of David J. Silverman insists that the Wampanoag Indians of Massachusetts were the English settlers’ technological and cultural equals:

“Human civilization in the Americas was every bit as ancient and rich as in Europe. That is why Wampanoag country was full of villages, roads, cornfields, monuments, cemeteries, and forests cleared of underbrush.”

Whoa — cornfields! How about cathedrals? Did they have any of those? What about books? Had they managed to construct boats able to cross the Atlantic?

Here’s why it was so easy for English settlers to best America’s indigenous (and demonstrably violent) tribes at the art of war — one group had more technologically advanced weaponry than the other.

Pilgrims: “Historical evidence shows an assortment of firearms came across the sea with the pilgrims. . . . Most were smoothbore muskets or fowling pieces along with a few snaphaunces (early flintlocks), perhaps a few pistols and two or three wheellocks of which one was [John] Alden’s.”

That’s really all you need to know about why the Pilgrims eventually came out on top. Every explanation that conjures superstitious and childish bugaboos such as “racism” and “evil” falls flat on its face and is likely designed to spare Injuns from the shame of acknowledging that the main reason they were almost wiped off the planet was due to their backwardness.

Remember — the moment you’re able to sniff sanctimony, the rancid stench of lies is not far behind.

It is also a bald-faced lie that the Wampanoags’ friendliness toward the Pilgrims was motivated by selflessness. Here’s what I’ve been able to piece together from historical accounts. . .

In 1614, a member of the Wampanoag Confederacy named Squanto was kidnapped by European coastal raiders and transported to Spain, where he was enslaved. If you want to say that’s a bad thing, fine, but is it truly as bad as being so primitive that you can’t even build a sufficiently large maritime vessel to do the same thing to Spaniards in retaliation?

Squanto — which is a great name to call someone passive-aggressively (try it if you don’t believe me, Squanto) — was then transferred to England, where he learned English and worked as a shipbuilder. When he returned to America on an English ship in 1619, he found that his family and a majority of his tribesmen had been wiped out by diseases that the British had unwittingly brought with them across the sea. Contrary to popular mythology, the British did not intentionally infect anyone, and if you want to blame anyone, blame the natives for having substandard immune systems.

When the Mayflower finally landed on Plymouth Rock in 1620, the Wampanoag were understandably wary of these pale-faced disease-carriers. But after a few months and with Squanto as a go-between, the Indians and Pilgrims signed a treaty of mutual military defense in April of 1621.

You see, these peaceful, nature-worshipping Wampanoags had been engaged in ongoing tribal warfare with the neighboring Narragansett and Massachusetts Indians, and it made strategic sense to form an alliance with strangers who had magic fire sticks that go BOOM. The Wampanoag agreed to protect the Pilgrims from raids by other savages and from the pesky French, whereas the Pilgrims would provide the firepower to help exterminate the Narragansett and Massachusett tribes.

Ain’t it queer how the true myth of Thanksgiving is that the Indians were peaceful and kind?

The alleged “genocide” of Native Americans — I put it in quotes because there are about twice as many Injuns in North America now than there were in 1621, and what they may have sacrificed in war paint and feathers has been more than compensated for with longevity and casinos — involved Native Americans as co-conspirators. 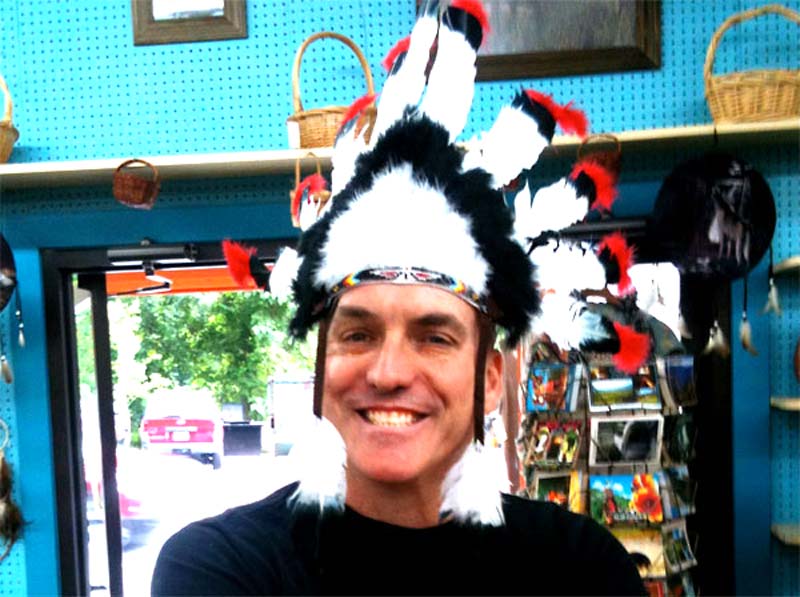 » Biology of Ideology, Part I: How to Win a Civil War