I’d Rather Have the Klan Than This 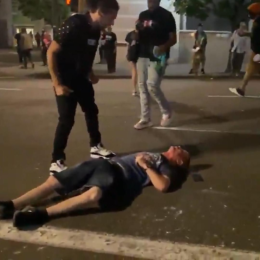 If there’s a central defining feature of education and upbringing in the West among whites, Mandatory Altruism seizes that distinction. It’s the idea that a person’s moral worth depends upon how much he (or, more importantly, she) pines for the welfare of people unlike her. Looking out for oneself or one’s family is not necessarily evil within this paradigm. But what is considered evil is for whites to violate the tenets of Mandatory Altruism when it comes to race. In order for a white person to be considered humane and ethical, that white person must at least publicly declare her concern for the plight of other races and to renounce any similar concern for her own race.

If a white desires additional moral glory from her peers and betters, she can then act on this Mandatory Altruism. There is a host of things she can do — self-effacing, self-degrading, self-impoverishing, and self-destructive things — that can bring down the golden rain of moral glory upon her head. And if that isn’t enough, there’s always vaulting into a double-salto backwards tuck with full twist à la Summer Taylor while promoting the racial supremacy of non-whites to the point of stopping traffic. (I’m sure our elites gave her a ten for her performance, despite the awkward landing.) After all, what could be more moral for a white person than to protest the oppression of blacks and then get run over by Jaguar driven by an oppressed African black?

In today’s society, there is no such thing as too much Mandatory Altruism among whites.

I inadvertently experienced some of this moral glory myself years ago in an automobile altercation slightly less poignant than the late Miss Taylor’s. I was driving back to work with an Indian colleague — for simplicity’s sake, we’ll call him Abhijeet — when I accidentally rear-ended a Toyota Camry. Really, I barely touched it, but the impact was enough for the driver to come out and inspect the damage. It was a college-aged white girl and she was not happy that I had tapped the back of her car. She kept declaring that this vehicle was her “baby” and, despite the fact that I hadn’t caused a dent, was really distressed that I might have scratched her bumper. We looked at the bumper and saw maybe two minor scratches, but it was debatable whether those scratches had been caused by my car. As we debated it, she grew more and more hostile and kept repeatedly calling me “sir” in a manner as false as it was formal. She then produced her cell phone, presumably to call the cops.

I needed to act fast. So I called upon Abhijeet to inspect the damage for an impartial opinion. The moment the girl noticed Abhijeet — slender, swarthy, diminutive Abhijeet — she put away her phone and started acting nice to me. Abhijeet agreed with me that the scratches could not possibly have been caused by my car, and the girl stoically accepted his pronouncement. Then, with a friendly wave and smile, she drove off. And that was that.

Moral of the story: Always carry a pocket Tonto, white man, or else people will think you’re a jerk. In the eyes of this white girl, I couldn’t have been all bad if I deigned to associate with an Indian. Further, contradicting said Indian would have violated her sense of Mandatory Altruism. So she didn’t and went on her way. A white who associates with non-whites makes a much different impression than one who doesn’t. Because of Mandatory Altruism, such distinctions matter.

The rub appears when we realize that while Mandatory Altruism may bring moral vindication, it also brings death. How could it not? If one ceases to care about something, that something will fall into decline, break down, and ultimately stop functioning. If you stop caring about yourself, you get fat, lazy, and unhealthy. If you stop caring about your family, your kids become feral miscreants, your spouse leaves you, and your homeowner’s association will try to get your house repossessed because your neighbors have complained that the place smells like garbage and you haven’t mowed your lawn in six weeks.

You see where I am going with this, don’t you?

This is what happens when whites abandon their racial interests, and it is what many see happening at an accelerated pace all throughout the West. Not only are young whites tripping all over themselves to comply with Mandatory Altruism to the point of taking up arms for the sake of non-whites, but entire communities of whites in America are suffering from high rates of drug addiction, suicide, and other forms of cultural malaise. They are being replaced by foreign workers in many instances, and they are being put in jeopardy by their very proximity to non-whites in their racially integrated neighborhoods. And it is taboo to talk about any of this.

You know what else is taboo? Questioning white fidelity to non-white causes. For example, when President Trump awarded Rush Limbaugh the Congressional Medal of Honor, black daytime television host Whoopi Goldberg fumed that the widow of black lawmaker and Civil Rights icon Elijah Cummings deserved it more. My taboo response to Goldberg would be, “But what did Elijah Cummings ever do for me? What did Elijah Cummings ever do for white people except cheapen, impoverish, and endanger our society through racial integration?”

It’s a serious question that demands a serious answer, but to ask it — especially in public — would violate Mandatory Altruism. Whites are supposed to admire people like Elijah Cummings because he furthered the racial interests of blacks, not because he did any good for white people. To ask such a question to a black or Jew most likely would offend them to the point of anathema. As whites, we are supposed to renounce our racial interests — anything else would be uppity.

This is why I find myself longing for organizations like the Ku Klux Klan from its heyday in the 1920s. Sure, the Klan could be an abusive lot and did a lot of violent things they shouldn’t have done. But they were also a militant, fraternal organization centered around white racial interests. If whites wish to survive, we will need modern versions of organizations like that — preferably nonviolent, well-funded, lawfare-mined organizations that can withstand any attacks that analogous Jewish, black, Hispanic, or Muslim organizations can hurl at them. To accomplish this, whites need to band together, start small, and weaponize their money.

To the question of whether placing white interests above non-white interests is immoral, I would counter with asking whether putting non-white interests above white interests is not equally immoral. This is exactly what the ADL, SPLC, NAACP, La Raza, and CAIR do. And what has this led to? An overall diminishment of white influence in the West and the coming eclipse of Western Civilization. The Ku Klux Klan can be accused of doing a lot of bad things in its day. But not that. It was essentially a crude and sometimes misguided — yet often effective — defense of Western Civilization. It came about in response to the same kind of degeneracy, lawlessness, and corruption that we’re seeing today, except during Reconstruction 150 years ago. As a white person who is concerned about my race and my civilization, why wouldn’t I yearn for an organization that puts my racial interests before any others?

And to the question of whether it is moral to call for the return of a militant organization like the Klan, I’d respond by asking if Antifa or Black Lives Matter are any better. Would we rather live in a world in which black supremacists and paramilitary communists are taking over whole cities, defunding or dismantling the police, staging armed marches in residential neighborhoods, committing violent assaults against whites, engaging in riots all across the country, and pushing for radical Left-wing candidates to take over our government — all for the demonstrable lie of racial egalitarianism? Or would we prefer vigilante justice from a secretive organization that promotes racial truth and the racial interests of whites?

Now, I don’t necessarily want the Klan. I’d prefer something classier and more sophisticated. I’m just saying that even with all its flaws and sins, the Klan from its 1920s heyday is still the lesser evil when compared to Antifa and Black Lives Matter. In the final analysis, it may not even be an evil at all. An empowered Ku Klux Klan would not stand for the anti-white violence and chaos we’re witnessing today. And they certainly would not stand for anything as stupid, unnatural, and self-destructive as Mandatory Altruism.