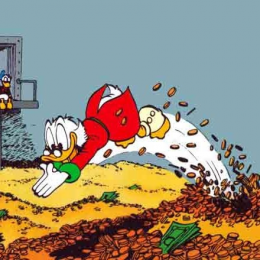 Fróði’s answer intrigued me a little bit more, since he addressed general concerns about youth, wisdom, and growing up. Like many of us, I am sure, I never seriously considered an academic career in anything, so his answer applied to me a bit more than Greg’s. After admitting that he had been a bit of a Bohemian in his youth who may have squandered traditional career opportunities, he advised young people to do what makes them passionate. He then relayed a story from Jonathan Bowden in which Bowden’s father recommended that his son keep his head down, establish himself in a respectable career, and make a lot of money. Young Jonathan replied, “But I don’t believe that that’s what life’s about.”

Fróði did admit that he had made mistakes in his twenties (as we all have, I am sure) but regretted little because mistakes are baked in the cake at that age. It’s part of the charm of youth, thinking that you’ll live forever.

Greg concluded with the following advice: “Do what you love” and “don’t sell out too soon.” Fróði agreed, and advised people in their twenties not to be “too focused on staying in the middle of the road” and “have the courage to speak up.”

Of course, this is all excellent advice, and something I am quite keen on, since last year I wrote a three-part series entitled “Advice for Young White People” (Part 1, Part 2, Part 3) which covers this very topic. But if I had to re-live my twenties, I would approach it from a significantly different perspective:

I would earn as much money as humanly possible.

Allow me to explain.

There is a common assumption that doing what you’re passionate about and having a traditional career are mutually exclusive — and in many cases this is true. But it is not true in my case. People who’ve been reading me for a while should know that I am quite passionate about writing and about history, literature, music, and films. But you know what else I am passionate about? My career. I have a pretty ordinary tech career — but I built it from nothing and I do love it. I would never willingly part with it. Like many, I am passionate about being a husband and father. I am also passionate about being a homeowner. Nothing excites me more than yardwork (believe it or not) or projects around the house that require basic carpentry. If you had told me in my mid-twenties that I would be reveling in my thoroughly bourgeois life two decades later, I wouldn’t have believed you.

It is possible that one can “sell out” and still not sell out. I wrote my first dissident novel White Like You from 2011 to 2016 during a time when I was averaging sixty-to-seventy-hour work weeks. And this is on top of having a family with small children. Since starting with Counter-Currents in 2016, I have contributed slightly more than one article per week while maintaining my career and family life. I have also written a second novel, A Rope of Sand, which hopefully will see the light of day later this year.

In your twenties, it may seem you can love doing only one thing. But as you get older, if you’re honest and work hard, you will likely see the number of things you love increase. And this leads me back to the original question: What would I do differently if I were to relive my twenties?

I would start with an attitude adjustment. I would start with the realization that, as a white man, non-whites for the most part are waging demographic warfare against me and my kind. All of the major Dissident Right websites focus on this very topic in one way or another, so if you’ve gotten this far into this essay, you’re probably already aware of at least some of them. Not only this, but our demographic enemies are very good at waging demographic warfare against white people, through immigration, litigation, crime, miscegenation, dysgenic behavior, and many other means. Thus, all white people should act with some form of urgency, and if there was anything I did not have in my twenties, it was urgency. This was the late nineties. I thought the prosperity would last forever since I had never really experienced anything else in my lifetime.

I was somewhat racially aware in my twenties, but I never identified as white back then. My outlook resembled John Derbyshire’s Sun People-Snow People dichotomy. I saw humanity across a black vs. non-black divide. I was in the latter group, obviously, but I felt that Jews and most Asians were as well. In my twenties (prior to 9/11 and before I had any real contact with Hispanics), I saw no reason why all non-blacks couldn’t get along and do great things together.

Of course, I was wrong. And I don’t blame myself much, since I was pretty edgy in my twenties, relatively speaking, just by being a race realist. That does count for something. But it’s not enough. Whites today are in a race against time. If we wish to maintain our identity and our homelands and have a commanding say over our posterity before the end of the century, then we need to act now with confidence and alacrity.

And this cannot be done, sadly enough, without money. Lots and lots of money.

Last week, I reviewed Aleksandr Solzhenitsyn’s Lenin in Zürich. In it, I couldn’t find a place for the following passage, but here it fits well:

Tha-a-a-a-at was something Lenin understood very well! That bare ideas will get you no further forward, that you cannot make a revolution without power, that in our time the primary source of power is money, and that all other forms of power. . . are begotten of money.

So when I say I would make as much money as possible if I were to relive my twenties, I’m not implying that that money would have gone towards expensive thrills, excessive comfort, or an extravagant lifestyle (not that I ever pursued any of these). This approach applies only to those who aspire to incorruptibility because much of that money would not go to them. It would go towards the Cause. And without being burdened with the various and significant expenses that I have today, I could have saved up quite a bit in my twenties as an unmarried workaholic with cheap tastes. I am sure I could have put some of that money to good use supporting dissident causes back then — as I do today. For a contemporary example, Greg Johnson has pointed out how useful it would be to test in court the legality of Amazon’s deplatforming of the Dissident Right. Of course, he’s correct. But people on the Dissident Right can’t come up with the scratch, so nothing gets done.

There is no excuse for this.

And think about it: What would frighten our enemies more? An organized, well-funded, pro-white Right that wages long-term lawfare against the anti-white Left on multiple fronts, or a bunch of disaffected youths marching in the streets, holding tiki torches and chanting anti-Semitic slogans? The latter only plays into our enemies’ strengths and emboldens them, the former does not. In my “Advice for Young Whites” series, I outlined six things young whites should do for the Cause, and the sixth — and perhaps most important — was to weaponize money.

It’s what our enemies do to us, and it is why they win.

So maybe Jonathan Bowden’s father had been at least partially right all along. It is important to make money. Making money is a big part of what life is about — if not for us, then for our descendants and for our long-term survival. Without money, fighting the demographic wars, raising children, and having a positive impact for our people becomes much, much harder to do.

Most importantly, making money does not have to prevent us from doing what we love, whatever that may be.

» A Second Look at the Third Amendment