The Martyrdom of Robert Brasillach 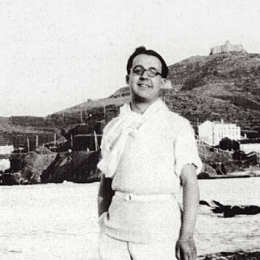 “The James Dean of French Fascism.”– Alice Kaplan, author of The Collaborator: The Trial and Execution of Robert Brasillach (2001)

Such a description of the puny, bespectacled, and boyish-looking poet — especially coming from the daughter of a Nuremberg prosecutor — seems to be either thinly barbed facetiousness or malignant irony. Yet, the dignified and defiant manner with which Brasillach faced his inevitable conviction and subsequent death sentence does, in some ways, justify the author’s hyperbole.

Rising to his feet in the Salles des Assises at six o’clock on the 19th of January, 1945 to hear his fate, the defendant greeted the spite-filled announcement with the typical owl-like grin, so familiar to those who knew him well, and responded to the furor raging all about the courtroom as his supporters and detractors began to scream and shout by replying:

Then, at exactly 9 o’clock in the morning, on February 6th — the very anniversary of the Rightist League’s rioting on the Place de la Concorde which left eleven dead — he was summarily marched out from his cell. This came despite entreaties for a last-minute reprieve from his political enemies, including literary leftists like Francois Mauriac, who claimed Brasillach in different times would have been acclaimed amongst The Immortals of the Academie francaise, Paul Valery, Jean Cocteau, and Thierry Maulnier. To these, arch-hypocrite and later traitor of the Pied Noirs in French Algeria, President de Gaulle, countered insistently: “Talent has responsibilities.”

So, Brasillach was led out of his monk-like existence, calling out “Au revoir Beraud, Au revoir Lucien Combelle!” to his fellow prisoners before being unceremoniously bundled into a van awaiting him outside the Fresnes prison.

Brasillach penned his Poemes de Fresnes and his political testament, Lettre a un soldat de la classe 60 in a morbid haze of lachrymose cigarette smoke while he awaited his familiar journey down the route d’Orleans to his show-trial for “intellectual crimes.” It was on that fateful final occasion the author was taken to the Montrouge fortress, arriving around thirty minutes past the hour, to find a firing squad of twelve men awaiting him atop a grassy knoll.

As he was clumsily tied to a post and he raised his reedy voice in one last act of bravado to shout: “Vive la France quand même!” — “But all the same, long live France!”, a salvo of bullets tore into him, and his inert body crumpled loosely forward, and a disheveled sergeant major ran up quickly, pointing his Lebel revolver to deliver the coup de grace.

So began the legendary martyrdom of Robert Brasillach, a man who never played the role of ‘political actor’ or even sought public office. His memory was kept alive by the tireless work of his brother-in-law, Maurice Bardeche, who to his immense credit went on to co-found the Comite National Francais, the Comite de Coordination des Forces Nationales Françaises, and the Rassemblement National Francais, and was a key initiator of the 1950 meeting in Rome that eventually led to the European Social Movement. Bardeche, in partnership with the illustrious legal defender of the later OAS movement, Jean-Louis Tixier-Vignancour, also published the radical journal Defense de l’Occident in 1952, something many thought to be the reprise of Brasillach’s very own wartime invective in Je suis partout and later Lucien Combelle’s weekly newspaper Revolution nationale.

So who was this physically innocuous and contradictory man who could inspire such fervent admiration from contemporaries like Henri Massis, who wrote: “How many times since Brasillach’s death have we asked ourselves, we, his elders, who should have protected him against his own youthfulness, did we not perhaps love him less well than we should have?” Such solicitous affection is counter-balanced by long-lasting vituperative hatred, evidenced by the fact that as late as 1957 — some twelve years after his judicial murder — a Communist Resistance Commando was so determined to stop his play La Reine de Cesaree from being performed that he felt compelled to threaten to attack the theatre where it was to be staged.

Brasillach was a parochial but precocious young talent, born in sun-dappled Perpignan, whose father was killed in an encounter with Zaian rebels on the plain of El Herri in Morocco in 1914. His mother, a light-hearted non-conformist, who, along with writers like Alexander Dumas and Jules Verne, greatly influenced Robert’s early development, then remarried a physician, moving the family to Sens. Brasillach was to go on to attend the famous Louis-le-Grand school in Paris and study Greek, Latin, French literature, philosophy, and history.

At Grand, he fell under the influence of writers like Alain Fournier, who wrote Le Grand Meaulnes (1913), Marcel Ayme, Raymond Queneau, and Rabelais, who he believed to be the patron saint of scoffers and therefore the arch-defender of liberty and free speech. Brasillach:

Joan of Arc was the very symbol of a youth without respect. She laughs at conventions and false powers. . . Joan offers us, with her smile, the magnificent virtue of insolence.

This attitude led Brasillach to become increasingly seduced by the anti-Third Republic views of reactionary professors like Andre Bellessort and later, as a student at the Ecole normale, by the previously mentioned Henri Massis, Maurice Barres, Charles Peguy, and Charles Maurras. By this time he was also fraternizing with other like-minded individuals who would themselves later contribute to Je suis partout, like Georges Blond, Jean Martin, and Paul Gadenne, and visiting salons like the right-wing Rive gauche sponsored by patrons like Annie Jamet. This formula was later repeated in the form of the Nouvelle Droite, which spawned France’s most illustrious current New Right philosopher, Alain de Benoist, who has himself written articles for Bardeche’s journals and in a magazine founded in partnership with Dominique Venner.

Brassilach was then, in his own unique and sometimes frivolous way — being a dilettante disciple of the anarchic individualism articulated by Max Stirner and a self-declared Anarchofascist — thought to be a fellow traveler of the Right by his enemies. These contemporaries included writers such as Alphonse de Chateaubriant, who was forced to flee to Austria in 1945 and live under an alias in a monastery in Kitzbuhel; Louis Ferdinand Celine, who was evacuated with Philippe Petain to the Sigmaringen Castle after the Allied invasion of France in 1944 and later imprisoned and declared a ‘national disgrace’; Pierre Drieu La Rochelle, who edited the Parti Populaire Francais’s review L’Emancipation Nationale and committed suicide as communists rampaged through Paris at the end of the war; and Henry de Motherlant, who, like Brasillach, expressed satisfaction that France’s Third Republic had been overrun by the Wehrmacht.

These were literary figureheads who were complicit in murder and treachery, only one step removed from the likes of Pierre Laval, Joseph Darnard, Marcel Deat, and Philippe Henriot. In the eyes of his political opponents, Brasillach was not only someone who had willingly collaborated with National Socialist Germany and spoke of ‘sleeping with the enemy’ in a quasi homo-erotic manner during the occupation, but he also stood shoulder-to-shoulder with Petain’s Vichy regime and had sympathy for — and sometimes consorted with — the likes of Jacques Doriot, Head of the Parti Populaire Francais (PPF), Marcel Bucard, leader of the pro-right Francists, Eugene Deloncle, founder of the Comite Secret d’Action Revolutionnaire  and other groups like Revolution Nationale, Legion des Volontaires Francais (LVF), Croix-de-Feu, Action Francaise, Jeunesses Patriotes, and Solidarite Francaise.

Brasillach’s associations made him a prime target for symbolic and vindictive revenge, regardless of the fact that, in reality, he never truly fit in with any of the fascist movements aspiring for governmental power in Europe during his lifetime. Brasillach was an anti-modernist at heart. It is true that he was increasingly drawn to the grandeur of Mussolini’s blackshirts in Rome, Franco’s nationalists after their triumph in the Spanish Civil War, Degrelle’s Rexists in Belgium, and of course, the Hitlerian spectacle of the Cathedral of Light at the Nuremberg Rallies — but in truth, he clung to the idealistic notion of a White International of youth cleansing the ‘old whore’ of his hated Third Republic.

As William R. Tucker writes in his work The Fascist Ego: A Political Biography of Robert Brasillach (1975):

Brasillach saw himself as an intellectual rebel who might further through revolution the victory of the individual — conceived as a unique, creative, feeling animal — over the insensitive, unimaginative, manipulative plebs who threatened to engulf Europe with their mediocrity and their material aspirations in the name of progress and modernization. . .

Brasillach placed his hopes in the rebellion of those under thirty; and he dwelt at length on the virtues of joy and irony bringing about the birth of a post-liberal era. He insisted on the importance of an aesthetic view, rejected both Western corporate capitalism and Soviet bureaucratization, and deplored the rule of commodities over man.

Small wonder then that charismatic rightists like Jean-Marie Le Pen, former leader of the National Front, and Pierre Sidos, the founder of Jeune Nation, continued to stand for many years alongside Bardeche at Brasillach’s gravesite in Paris.

Brasillach, who has in many ways been transfigured by his persecution, leaves an almost unrivaled symbolic legacy to future generations of nationalist revolutionaries, encapsulated in some of his final notes: “Friendship will conquer: Long live the Black flag” — a paean to the independent and oppositional revolutionary spirit he believed to be redolent amongst the blue-coated rightists he mixed with in his beloved Latin Quarter — and a resounding echo of his deepest desire, which he alluded to in an article he composed as far back as 1931: to live forever in Alain Fournier’s Lost Domain, “an unnamed country made up of friendships and rituals.”

» Fróði Midjord’s The Virtue of Dominance