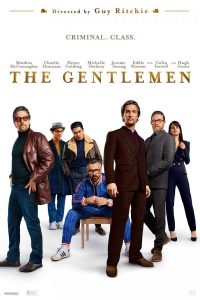 Guy Ritchie’s The Gentlemen is his best movie since his first two feature films, Lock, Stock, and Two Smoking Barrels (1998) and Snatch (2000), largely because it is a gentrified return to their crime caper format.

Ritchie at his best is a kind of British Quentin Tarantino, with his underworld settings, non-linear storytelling, colorful and witty dialogue, and gleeful political incorrectness (because criminals don’t think and talk like SJWs would like them to) — but without Tarantino’s sprawling, self-indulgent running times.

Ritchie at his worst? Well, imagine what Tarantino would turn out if he were in indentured servitude to Disney.

The Gentlemen has a great deal of star power. Matthew McConaughey plays the protagonist, Mickey Pearson, an American who ends up at Oxford on a Rhodes Scholarship but drops out to become a drug kingpin. Some twenty years later, he has leveraged his Oxford connections into a pot-growing empire, tucked away on the country estates of aristos who are hard up for cash to maintain their stately homes.

Mickey, however, wants to retire and offers to sell his operation for $400 million to a bland, prissy American Jewish crime lord Matthew Berger, played by Jeremy Strong. But, as he finds out, the underworld is a jungle, and it is dangerous for the king of the jungle to retire, for it signals weakness, and the jackals come running.

He also lucks out with his enemies. Hugh Grant is brilliant as Fletcher, a sleazy private eye and would-be blackmailer who narrates the whole tale. Then there are Berger and the Chinese narcotics mafia, led by Lord George (Tom Wu).

I won’t say much about the plot, because I actually want you to see The Gentlemen, but I do need to reveal some elements to comment on the controversy it has generated.

Like Lock, Stock, and Two Smoking Barrels and Snatch, The Gentlemen has been accused of being “racist” and “anti-Semitic,” both for its language and also for the plot conflicts. For instance, throughout The Gentlemen Jews are characterized as Jews, and this being a crime drama, none of them are good Jews. The Colin Farrell character also explains to a black fighter that he should not take offense at being called a “black bastard” because it happens to be true. The gangster Dry Eye is described as a “Chinese James Bond,” complete with “Ricense to kill.” One of Dry Eye’s henchmen is named “Phuc,” suffers from asthma, and dies hilariously. I saw this film in a packed theater, and the audience laughed heartily in all the “wrong” places.

Beyond that, the main conflicts in the movie break down along racial and ethnic lines — whites vs. Chinese and whites vs. Jews (Berger and his Mossad bodyguards, which he calls “crabs”) — and, boy, do the whites ever win. The whites, moreover, are in the pot business, and pot doesn’t kill anyone, while the reptilian Chinese sell heroin and coke, which are “destroyers of worlds” — something made graphically clear as the film unwinds.

When the Jew, Berger, double-crosses Mickey Pearson — and don’t whine about a spoiler here, because as soon as you see Berger’s face, you know he will be a double-crosser — Mickey tells him that he can go free only after he makes financial restitution then cuts a pound of flesh from his own body. And, unlike Shylock, Mickey Pearson is not going to let himself be stopped by a technicality.

Moreover, there are a number of black bit players, most of them rapping, tumbling buffoons. All of them more or less take orders from whites.

But Ritchie has some plausible deniability on the racism charges. First of all, all the people who say bad things are criminals, so Ritchie can say that he’s just being realistic when he has bad people say bad things. Second, there are also some minor white antagonists, in the form of a Russian oligarch (who is also ex-KGB) and his hired guns.

Beyond that, Guy Ritchie can probably say that some of his best friends are Jews, given that he and ex-wife Madonna were deep into Kabbalah. Furthermore, Ritchie allegedly speaks some Hebrew, and he actually named his three children with Jacqui Ainsley (who does not appear to be Jewish) Rafael, Rivka, and Levi. (Ritchie also adopted an African child, David, while married to Madonna, as well as fathering her son Rocco.) Given these kinds of dues, I think Guy Ritchie is entitled to talk about Jews like they talk about themselves.

I highly recommend The Gentlemen if you are looking for a grown-up, politically incorrect comedy about colorful rogues. There’s a bit of violence but nothing too distasteful. The script is witty, the plot has some surprising twists and turns, the performances are excellent, and the pacing never fails. Although there really aren’t any good guys in this story, at least the white guys win in the end.

This article was originally published by The Unz Review on February 20, 2020.