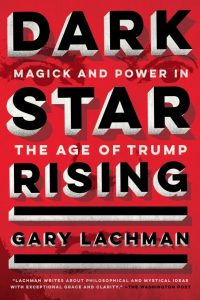 The book that exposes Red Ice for the neo-Soviet Russian front that it is!

I’m only a few pages into your pathetic Alt-Right cash-in book and already regard it as an instant camp classic. Thanks for the unintentional laughs, sir. https://t.co/r941q6zcEt

In the midst of the spew of generically Trump-trashing pseudo-solemnity about “Russiagate” and the Alt Right cash-in books exposing the it-can-happen-here threat posed by 4chan and dudes in MAGA hats, one recent offering stood out as something that might be worth my time – even if only for the proverbial LULZ. In Dark Star Rising: Magick and Power in the Age of Trump, the prolific popularizer of esoterica, Gary Lachman, throws his sorcerer’s cap in the ring to confront the disturbing question of whether Trump’s election was not the work of Russians alone, but the doing of Russians and magicians. 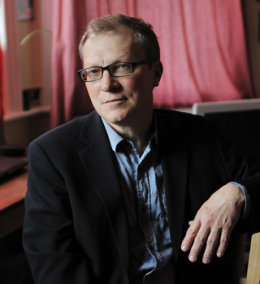 The problem with Lachman’s book from the outset is that he does not appear to be able to decide between, on the one hand, pointing and laughing at all of the silly, superstitious things that Right-wingers believe and, on the other, attempting to spook the reader with vague suggestions of the shadowy occult forces guiding the GOP and Putin’s “totalitarian” Russia. Attempting to do both at once does not work. Similarly, Lachman wants to have it both ways with regard to “conspiracy theories.” In his Introduction to Dark Star Rising, he ridicules Trump as “a keen believer in and promoter of conspiracy theories” and refers condescendingly and without relevance to “believers in a flat earth, fake moon landings, and other conspiracies.”[1] A few pages later, however, Lachman writes in perfect earnest, “The Russians are believed to have attempted to influence the U.S. presidential election via some cyber-sabotage, and by all accounts this is not just a paranoid idea.”[2] There is no refuting “all accounts”! “I am not conspiracy minded,” Lachman writes, attempting to rationalize his blatant hypocrisy on this score, “although conspiracy consciousness will play a large part in the account that follows.”[3]

Whatever his level of “conspiracy consciousness”, Lachman appears to be utterly unaware of the unintentional humor he occasions with his own obnoxious and overblown fearmongering. “Dugin’s remarks about globalization are often little short of hysterical,” Lachman observes with smirking detachment[4] – before knitting his brows again on the following page at the rise of Right-wing extremism and asking, “Is some kind of occult war on its way, or has it already begun? . . . Are the end times near?”[5] Nor does Lachman appear to feel he sacrifices any credibility as an investigator by mentioning “the ‘mass spell’ cast by witches around the world, begun in February 2017, ‘binding’ Trump and all his associates, which seemed to have some effect. If that isn’t occult politics,” he adds, “I don’t know what is.”[6] But remember: stupid, superstitious, Right-wing Trump supporters who believe in “conspiracy theories” are the ones who deserve our derision – not witches whose activities actually “have some effect.”

If we accept the reality of synchronicity, of events in the inner and outer world happening in a synchronized manner, with no apparent causal relation but a very significant meaningful one, then we have no reason to deny a priori the possibility that chaos magick, and New Thought, can work. That they do work is a different question. If this is so, then the idea that a cartoon frog appropriated by a far-right group helped to put the positively thinking Donald J. Trump in the White House is not beyond the realm of possibility. And one has to say that is precisely the sort of thing – and through precisely such methods – that a chaos magician would like to bring about. . . .[7]

Like Tarl Warwick, Lachman considers the possibility that Pepe the Frog is an “egregore,” a “kind of thought form or imaginal entity created and fed by the devotion of a group of followers” and how, after being “brought into existence, an egregore is difficult to control and much harder to put down than to raise up,” Lachman warns:[9]

Am I saying that Pepe the Frog is an egregore or tulpa or is on his way to becoming one? Perhaps. Or that he and his devotees are being used by some supernatural entity for its own purposes? Again, perhaps. Is Trump himself a tulpa or egregore, brought into existence by his fan base? It is not inconceivable. Pranksters are amused when their jokes are taken for real, a tactic employed by many alt-righters to show that “social justice warriors” can get into a panic about practically anything. But perhaps they themselves are being pranked by some unknown power for its own purposes? Perhaps some entity’s entry into our plane is facilitated by agents unaware of their participation, who think their activities are just for “lulz”? Is Cthulhu calling? Whatever may be the case, strange coincidences have happened around Matt Furie’s disaffected amphibian. These suggest that it may be a good policy to keep an open mind about the matter.[10] 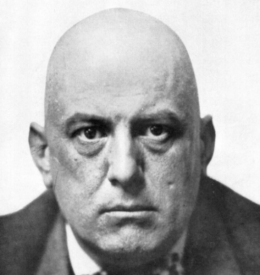 As is to be expected with such hackwork, much of Dark Star Rising is dedicated to highlighting the eerie similarities between Trump, Crowley, Hitler, Mussolini, and other dictators, gurus, and demagogues. Lachman has only gotten one page into his book before he feels compelled to remind the reader that the racial ideas of Germany’s National Socialists were “odious.”[11] “Hitler, Mussolini, and Trump all share a very bleak vision of life, a dog-eat-dog outlook in which the strong prosper and the weak go under, an outlook that Crowley shared.”[12] “Oddly, Trump and Crowley share some striking characteristics,” Lachman adds in a note. “Both are fond of ostentatious excess, both have an insatiable hunger for attention, both have a contempt for truth, both are sexist, both have a great appetite for power, both are unconcerned how their actions affect others, both are vindictive, both are prone to hold grudges, and both like to spend other people’s money.”[13] In a pathetic attempt to bolster the Trump-as-crypto-Nazi case, Lachman irrelevantly notes that “during World War I while he was living in New York [Crowley was] writing pro-German propaganda”[14] – neglecting to mention that Crowley was in the employ of British intelligence. Noting Trump’s supposed alternate identities as “John Baron” and “John Mills” for the purposes of prank phone calls, Lachman ingeniously conjures another Great Beast connection: “Aleister Crowley adopted different identities when the mood struck him – and, like Trump, did his best to keep his name in the newspapers.”[15] Characterizing Trump’s appeal to his followers as that of an abusive guru, Lachman also wonders aloud about “the odd hand gestures he makes when addressing a crowd, which often seem like the mudras used as meditation devices in Hinduism and Buddhism.”[16]

Because the case to be made for Trump as a neo-Nazi occultist elected to the presidency through 4chan group mind machinations and Russian chaos magick is so tenuous and flimsy, Lachman’s book is necessarily padded with mostly irrelevant digressions covering everything from mesmerism to Ayn Rand, René Guénon, Julius Evola, and Genesis P-Orridge, whose Throbbing Gristle performances utilized “hard pornography and Nazi imagery”[17] – spooky! In the most egregious instance of filler in Dark Star Rising, Lachman invites the reader to ponder Nike advertising:

[Ronald Reagan’s motto] “It CAN be done” is a perhaps more cautious affirmation than “Just Do It”, Nike’s tempting mantra to help us purchase more sportswear, but it is of the same ilk. And “Just Do It” is not that far removed from Aleister Crowley’s indulgent maxim “Do what thou wilt shall be the whole of the law”, a writ of permission that has fueled many a magician – chaos or otherwise – since the Great Beast first uttered it in the early twentieth century. Other exhortations to not be stymied by false limitations include the U.S. Army’s recruiting slogan “Be All You Can Be”, some version of which can be found in scores of self-help, motivational, and self-improvement teachings, calling on us to actualize to the full our many potentialities.[18]

The most plodding portions of Lachman’s book, however, are those in which he tediously insists on inserting HuffPost-tier diatribes about how Ann Coulter is “a post-truth alternative fact spokesperson”;[19] how, “As in the Hitler era, Jews were a standard target” at Breitbart;[20] and how “Trump seems in many ways to be modeling his administration on the kind of system Putin has had in place for years, in which the business of politics entails not only the practical concerns of running a government, but the wider, more inclusive activity of creating reality.”[21] His reference to “‘freedom of speech’ in the era of post-truth,” situating that liberty within scare quotes, is also telling.[22] Lachman’s most ridiculous attempt to keep the alarmist Trump-Russia connection alive in the reader’s mind is this reflection on New Thought preacher and motivational guru Norman Vincent Peale, whose sermons Trump attended as a child:

To “prayerize”, for Peale, means to keep the problem or concern constantly in mind, talking it over with God – the source of prayer power – as one goes about one’s day. It’s unclear if Peale knew that this seems a variation of the Russian Orthodox “Jesus prayer” or “Prayer of the Heart”, in which, as St Paul advises in 1 Thessalonians 5:17, one is to “pray without ceasing.”[23]

Connecting the dots yet? Putin’s puppet Trump probably even prays like a Russian!

Lachman, to his credit, has actually bothered to read some Traditionalist texts and has obviously spent many hours reading articles about the Alt Right – which is more than many journalists can claim to have done – but reading his take on millennials’ iteration of nationalism is still rather painful on the order of listening to Jerry Falwell trying to explain the punk ethos to people whose primary reference point for rock is Frankie Avalon. Lachman misquotes Richard Spencer’s “Hailgate” speech[24] and also shudders at “Spencer’s notorious Hitler salute.”[25] Ominously, he also observes that the National Policy Institute is “an innocuous name for what many believe is a white nationalist organization”[26] – a startling revelation for which Lachman credits the website of the Southern Poverty Law Center in his endnotes. Meanwhile, “Clinton spoke out against Trump’s endorsement of conspiracy theories and his intransigence when criticized for accepting the support of people like David Duke, head of the KKK”[27] – a bit like identifying Jimmy Carter as the current Commander in Chief. My favorite howler, however, is when Lachman fingers “Russian television host Lana Lokteff.”[28]

Lachman, one suspects, must have been having a giggle as he wrote some of the more ridiculous portions of his book, like this one:

Even stranger was the rash of fictional characters standing for office in local [Ukrainian] elections. At least fifteen Darth Vaders and other Star Wars figures campaigned  for votes across Ukraine; one “Emperor Dmitry Palpatine” even won a seat on the Odessa council, and a Chewbacca was arrested at a rally in the city. The spate of Vaders may only be the kind of postmodern joke that groups like Anonymous get up to, a kind of 4chan nose thumbing to the “establishment”, a half-serious “destabilizing tactic”. But as Odessa is a prime port figuring in Putin’s plans for the “Russia of tomorrow”, something more Sith-like may be in the cards.[29]

Is Dark Star Rising the dumbest book that will be published on the Alt Right and on Donald Trump’s presidency – or are there others out there, not yet written and waiting to be conjured into existence? “Let us look out on the horizon,” as Lachman invites in his Introduction, “and see what dark stars are coming into view.”[30]

Rainer is the author of Protocols of the Elders of Zanuck: Psychological Warfare and Filth at the Movies – the definitive Alt Right statement on Hollywood!

This article was reprinted from Aryan Skynet.