Christ-Like Aspects of the Sage According to Epictetus 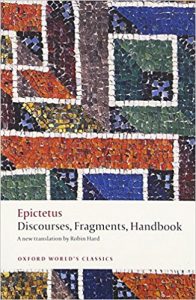 I was recently reading the Discourses of the Stoic philosopher Epictetus (c. 55-135 AD). These recordings of Epictetus’ teachings are a very fine work: one really feels as though one is in the early Roman Empire, at Epictetus’ school, and the master is speaking to us directly, in a very practical way. In his case, the psychogogical or soul-crafting function of philosophy is particularly clear and simple: one must learn to accept all that is not within our power, and focus our energies only where we do have power, that is to say the attitudes of our mind. We must then practically change our lives accordingly.

While Stoicism clearly has ascetic and cosmopolitan ideals, in practice it generally urges householders to found families and serve their country: each must, according to their place and nature, happily play their role in the divinely-ordained cosmic order. However, Epictetus also describes the homeless, nationless way of life of the Cynic sage as a kind of radicalized and higher Stoic. In a long discourse (“On the Cynic Calling”), he movingly describes the Cynic path in terms which, to my ears, are strikingly Christ-like:

And how is it possible for a  man who owns nothing, and has neither clothes, nor home, nor hearth, and lives in squalor without a slave, without a country, to pass his life in serenity? Look now, God has sent us someone to show us by his example that it is indeed possible. “Look at me, I am without a home, without a country, without possessions, without a slave. I sleep on the ground. I have neither wife nor children, nor a governor’s palace, but only the ground and sky and a single rough cloak. And yet, what do I lack? Isn’t it the case that I’m free from sorrow, free from fear? Am I not free? When did any of you ever see me failing to attain what I desire or falling into what I want to avoid? When have I ever cast any reproach at god or man? When have I ever accused anyone? Have any of you ever seen me with a sad expression on my face? How do I treat those who inspire you with fear and awe? Don’t I treat them as though they were slaves? Who, on seeing me, doesn’t think that he’s seeing his king and master?” (3.22.45-50).

By his example, his testimony, the Cynic shows that a life of supreme virtue and self-control is possible. Epictetus warns however that such a way of life will only be possible for a tiny minority of men who have God’s blessing. And again one has a defense of a very Christ-like unconditional altruism: “For this is a very pretty thread that is woven into the Cynic way of life, that he must be thrashed like a donkey, and that while being thrashed, he must love those who beat him as though he were the father or brother of them all” (3.22.54)

The Cynic sage, not unlike the Buddhist one, by training himself to become indifferent to material comforts and the fluctuations of the world, achieves a kind of invincibility.

No, but rather, go and sit inside like a girl, and wait for your mommy to come and feed you. If Heracles had sat around at home with his family, what would he have been? A Eurystheus [the cowardly man who ordered the labor of Heracles], and in no way a Heracles. Come now, as he traveled through the world, how many comrades did have with him, how many friends? But he had no dearer friend than God; and for that reason, he was believed to be a son of God, as indeed he was. (2.16.44)

According to the story, once Heracles had completed his earthly career of saving humans by cleansing the world of beasts and bandits, he died an excruciating death and then was risen to Mount Olympus as a god by his father Zeus.

Evidently I am not engaging in too much anachronistic parallelism, because the Christian Church itself was impressed by Epictetus and adopted some of his teachings. Robin Hard’s introduction to his translation of the Discourses says: “[Epictetus’] Handbook [summary of his teachings] was also adopted with modifications (including replacing the name of ‘Socrates’ with ‘St Paul’), by Christian monks, and used for centuries by the Eastern (Greek Orthodox) Church” (xxv). I was quite surprised myself to see the pagan philosopher Epictetus honored in some Orthodox churches besides Christian saints and angels.

Epictetus himself comments once on the Christians. He admires their very philosophical contempt for worldly things, making them immune to the tyrant’s oppression, while adding that “the Galileans” are however doing so out of “madness,” rather than reason (4.7.6).[1] The Christians were then achieving philosophical behavior through irrational means. (Populist irrationalism which, we must add, conquered the Roman Empire, whereas elitist philosophy perished.) “Platonism of the people” indeed. Christianity is Judeo-Platonism.

One does not need to believe in the authority of Scripture, or even in the historical Jesus, to be moved and inspired by the example of the mythical Christ: sacrificing oneself, with a generous and indomitable will, in the name of truth. Thence the power of the cross, that otherwise apparently morbid symbol: Witness! Witness our invincibility!

Much late-Hellenic philosophical wisdom is encoded therein, something facile atheists should try to appreciate.

At least some thoughtful people would no doubt be more sympathetic to Christianity, or at least its ideals, if introduced by way of Plato, Diogenes, Epictetus, and Marcus Aurelius . . . rather than Joel Osteen and the Torah.

When the Greeks were questioning their poems presenting Zeus as a serial rapist, the Jews were sanctifying their Scripture presenting Yahweh as a serial génocidaire. One can at least appreciate where Marcion was coming from.

[1] Marcus Aurelius, writing some decades after Epictetus, had a similar view. He admired those who were ready to die at any moment, but adding: “But this readiness must spring from a specific judgment, rather than mere contrariness as with the Christians” (Meditations, 11.3).