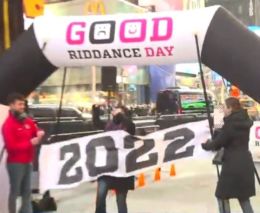 For media junkies like myself, the blessed week between Christmas and New Year’s should be rehab. It isn’t, of course. We can’t quit the needle. We spend the week watching myriad round-ups of the year that has just left us from around the media globe, as well as the other side of the two-faced god Januarius’ gaze: the media’s prognostications as to the year ahead.

2022 was what I have called another “accelerant” year, particularly concerning the United Kingdom, which is slavishly following, as it always will, the strange cultural commands of the United States, our bastard child, our Frankenstein’s monster. Things begun long ago are now with us. The seeds of current cultural strife that were sown in the 1960s; germinated in the ‘70s; sprouted during the relatively (for the West) affluent years up until the millennium; then bloomed, faded, and died like a summer rose in 2008 (a financial collapse I believe we are still going through), and are now usable only as manure for a hoped-for rebirth. And accelerant? Like a bad acid trip, now it is all speeding up. So, as we all ask, what next?

I won’t dull you with what happened last year because I am sure you noticed: the Leftist, woke absurdities; the hypocrisy; the industrial-scale lying by governments; the escalating danger we all face from foreign maniacs and home-grown political careerists alike. And let’s not forget the money. Governments are way more broke than I have ever been. Dustbowl 2.0?

There were stories that genuinely upset me. The staff of a hotel in the north of England whose guests were booted out to make way for Albanian illegal immigrants. The staff were fired and, as they left the building, some in tears, the new workers from the government were laughing and joking at their plight. Then the pimps and druggies moved in, and all was well with the world. Then there was the lady who was arrested for praying opposite an abortion center. Stroll on. What the hell happened to my country in my absence?

You can read this stuff yourself. I would prefer to take the long view. What are the trends, the under-currents and riptides, of what happened last year? I will feed it into my computing machine and tell you what the next year will bring, although that can be dangerous in itself.

What does the future hold, and do we really want to know? I once saw one of the scrying-stones — aka crystal balls — owned by John Dee, Queen Elizabeth I’s court astrologer, in the British Museum. It is smaller than you would think; much smaller than a baseball or cricket ball, not like the huge crystal balls you see in movies, with which you could make a ten-pin strike. I looked into Dee’s stone, but not for very long. I was, I freely admit, afraid to. What if you see something you can’t forget? Then what if it happens? One thing is as clear as the glass in Dee’s stone.

2023 will be the year anti-whiteness spills over. I think we have been prodded and goaded enough, no? We have had the piss taken out of us to the extent that it is either fight back or lose the fight psychologically. You can lose — or win — fights without landing a punch. I wish you had seen — and in many ways I hope you didn’t see — my mate Danny Branston, a London doorman (or bouncer, as the English call them) in the 1980s. He could defuse a fight with only a basilisk glare. If you saw Danny look at you when you were annoyed, and you didn’t just bugger off immediately, you had better be good and prepared to fight to the death. I was in a bar in Covent Garden with him once, and some guy was giving me grief. I can’t remember why. His mate joined in, and enter Danny. He ordered a couple of big vodkas for us while he held the two guys in headlocks. One of them was choking and, apparently, trying to complain about this treatment. Danny bonked the guy’s head against the bar while clinking glasses with me. A proper nutter, as we say.

All the anti-white stuff looks cool at the moment, but two things will happen. Firstly, the Danny Branstons will get fed up with it all and roll up their sleeves and get cracking. Secondly, a new political party will emerge, at least in Britain. I don’t think it will be Reform, who I am attempting to contact for an interview but who won’t talk to me because they have obviously Googled me and found that I tend to write for naughty Right-wing magazines like this one. Well, boys, let me tell you something. You are going to have to talk to us one day.

So, my old England is, as we say, proper fucked. Why, then, would I even think of going back? Three reasons. I want to go back and join the fight. I am a recognized Right-wing journalist now, featuring recently on a hate list entry concerning the magazine American Renaissance, for whom I have written. I am the first quoted writer, even higher than Jared Taylor!

The second reason is that, after seven years here in Central America, I am genuinely homesick. I love the old place, in all its rags and tatters. I may be going back into the lion’s den, because I have written a lot that would put me the wrong side of the law. But I have written it here in Costa Rica, where there is a constitution based on the US model, and two of the articles of which (I think it is 29 and 30) essentially mean that even as a non-resident I can write what I like about who I like and publish it where I want. That will not be the case in the UK, where they will be on my trail. But we will see. If I am kicked to death in Tommy Robinson’s old cell a year hence, then more fool me. But one Spanish word I have learned is cojones, and I think I have to prove to myself that I have them.

Next, my mother is 83 and I want to be around her again. Like all broken families, I was damaged by the break-up in a way that some of you will, sadly, be all too familiar with. I liked my father, but I didn’t love him. My mother, on the other hand, is probably the only woman I have ever loved unconditionally. Which brings us to our next subject.

I am also going back to the UK for love. I won’t twine on about it, but a Russian artist I have been in contact with for over two years — we have never met in person — and I have decided it is time we threw the dice. She is coming here to Costa Rica sometime soon, and we will consolidate the plan. I will have to get documentation and sedatives for the cat, but our plan is to live in Wales and grow old together. She seems to understand me, which is more than I can claim.

So, 2023. It is going to get better for us, my friends, and I am here to tell you why. The Left run everything now, but that cannot continue. Why? Because if you let spastics do complicated stuff like wash up the dishes, they will end up breaking everything. Our best strategy is to wait, drum our fingers, and move in when it all collapses. Then, like firemen or your nice teacher from school, we will take over. We’re just better at it. Who do you want to run the future? A guy who could build a log cabin, or some bumboy with a YouTube channel and 20 genders? I’ll let you have a little think about that.

Please have a wonderful 2023. Be sensible, don’t take any wooden nickels, don’t eat anything bigger than your head, and keep the faith. We are going to win.