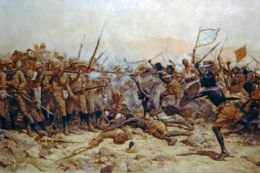 A new All Quiet on the Western Front movie is out. I read the book ages ago and saw the old 1930 movie, so I’ll probably download this one as well eventually.

It’s a great novel, supposedly an “anti-war” one, or so the literary critics say.

As I’m sure you know, it’s a book about the extreme hardship and trauma in a war that went horribly wrong.

But did you ever notice that successful art that leans pro-war is about the same thing? What is the world’s most famous piece of war-positive art? Probably “The Charge of the Light Brigade.”

If All Quiet on the Western Front is about the senseless slaughter of youth, then what is “The Charge” about except even more so?

Or how about this: The Nazis banned the war-negative Remarque and contraposed to him the war-positive Ernst Jünger, but the latter’s Storm of Steel is just as graphic as Remarque’s Western Front.

It’s interesting how the anti-militarists and the militarists are both going to the same well.

You might assume intuitively that anti-war writers would be writing about times when wars got horrifically messed up, with blood up to the knee and everyone losing limbs all over the place without even a costly final win to show for it. And that pro-war writers would be writing about the times when the enemy was defeated in two weeks and everyone was back home for Christmas.

But no, the best on both sides go directly for the most unwelcome, unplanned, and even stupidest parts of war.

So, then, is one of the sides committing a tactical mistake? Would the militarists be better served by sticking to writing about quick, easy wars? No, I don’t think so. I think the war enjoyers are doing as they should, and it is actually the anti-war side that is shooting its cause in the foot by not writing about swift, easy wars that go exactly as planned.

Let’s take Rudyard Kipling, the bard of British High Imperialism. He lived in a time when a world hegemon of hitherto unrivaled reach waged numerous campaigns against some of the most pathetic and backward peoples in the world, and he somehow managed to celebrate it all. How did he do it?

Here’s how. In “Fuzzy Wuzz” he first chronicles all the various times the British suffered a setback and got their nose at least a little bloodied:

We took our chanst among the Khyber ‘ills,
The Boers knocked us silly at a mile,
The Burman give us Irriwaddy chills,
An’ a Zulu impi dished us up in style . . .

And then congratulates the Fuzzy Wuzz for breaking the British square:

Our orders was to break you, an’ of course we went an’ did.
We sloshed you with Martinis, an’ it wasn’t ‘ardly fair;
But for all the odds agin’ you, Fuzzy-Wuz, you broke the square.

What is Kipling doing here? He lived through decades of some of the most lopsided wars that history had ever seen. Yet, he is actively mining for any instances when something went wrong — and zeroing in on something as minor as that one time a British square was temporarily broken. Why is he doing this? Well, what else is he supposed to do? Write about how the British had a machine gun with them and destroyed a thousand spear-wielders with firearms? That’s not art, that’s snuff.

By focusing on the minor British tactical setback, he is actually sanitizing what happened. He’s creating a story of the battle that can be told without making the audience vomit.

What happened was that a bunch of Sudanese were doing Sudanese things in the Sudan, and then a band of Space Aliens with twenty-fourth century weapons dropped into their midst and massacred the hell out of them in a “battle” in which they stood no chance at all, creating who knows how many orphans and widows and grief and trauma, and now the Space Alien poet is telling them, “Well, you know, you should feel really good about yourself, after all you broke the square!”

It’s so insane that it isn’t even certain that the poet is fully buying it. He takes the martial side of the responsibility, but not the political. He hides behind orders. “Our orders was to break you, an’ of course we went an’ did.” And even he’s a little queasy about it. “We sloshed you with Martinis, an’ it wasn’t ‘ardly fair.” One gets the impression that the Fuzzy breaking the square came as a relief to the author, who would have had a hard time living with the massacre if it had been any more one-sided.

An inverse Kipling is what an anti-war writer ought to do. Tell the story of everything Kipling’s sleight-of-hand is trying to distract us from.

The Great War was one in which everyone got more than what they bargained for, everyone got ridiculously traumatized, and everyone suffered way beyond what any of their war-guilt sins might have justified.

As such, the First World War is a great antidote to Kipling’s notion of war as some kind of a valor Olympics. But nonetheless, the very thing that made it so costly — that it was so two-sided — also gave it a terrifying poetry. And washed away the guilt. Nobody’s plans had worked. Everyone was decimated. The horror the continent devolved into was so far from what anyone had intended that nobody could truly be held responsible. The guilt for the war breaking out was assigned to Germany, but the guilt for the war becoming an apocalypse was assigned to the barbed wire, the machine gun, the gas, and the railway. The torrents of blood they had bled had washed away the participants’ guilt. The two-sided, shared nature of the trauma made them absolve each other of the responsibility for the worst of the horror. And in doing so, human agency was itself absolved.

Borders were redrawn, some gained and others lost, but nobody had gained more than what they had already lost. Everyone was the loser. Everyone had been the fool. This was not what anyone had intended. Not even the war parties. And so there was nobody to blame. It had been the barbed wire, or the alliance systems. It may as well have been the mischief of the gods.

The First World War is a useful warning, but it is not a great feat to hate a war in which everyone came out the loser. Adolf Hitler was against the First World War. He wrote that such a loss of German blood could only ever be justified if Germany had made far greater gains than anything the Kaiser had even been aiming for.

No, the book the anti-war cause needs is the book on what a war looks like when everything goes exactly the way the war party intended it. Optimally. What really happens under the hood of these “It’ll be over in two weeks, we’ll be home by Christmas” wars that actually pan out that way?

Because Kipling knew what he was doing. It’s not the hardship, the setback, and the loss on one’s own side that the public has to be shielded from. Often, the other side making it at least a bit of a sport is the only thing making war bearable at all.

Because here’s the thing: When you have every advantage in a war, and you’re pressing every advantage to the maximum, the results look plain unsportsmanlike. Optimal tactics against an opponent that was weaker to start with will consistently create a sight that is hideous to look at. There are going to be men after men annihilated with ease through no martial failing of their own as numbers, mobility, comms, and intel are leveraged to isolate them and hit them with enormous superiority from all possible sides. It’s ugly and clinical. Unpleasant and vile. Worse, there’s no decency to contrapose it against. There’s no chance for anyone to be a hero on either side, much less to die as one. None of that pathos stuff you can write poems about. It’s just clinical killing. Fast, efficient, relentless. Not even the square getting broken to take away the sting of what’s being done. And that’s exactly how the war planners ideally want it. And it’s a book Remarque would never write. He might be contra-war, but he still had to make art. This isn’t it.

But this book, the most anti-war book of them all, might actually already exist. Not so long ago, 500,000 Americans were in the Desert Storm massacre. Probably, many of them wrote accounts or even novels on it. A few of them might have been psychopaths. That’s the book we’re looking for. The book from the pen of a pro-war guy too mentally ill to know intuitively what effective pro-war propaganda must sanitize and shy away from.

The most violently anti-war book has probably already been written. It’s just that it’s a book you would never want to read.

This essay was reprinted from the Anti-Empire blog.