Ask A. Wyatt Nationalist Rigging the Election to Save Democracy 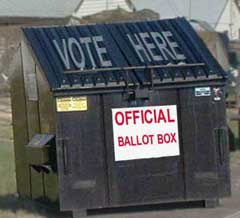 As part of our new Commission an Article feature, A. Wyatt Nationalist will give a White Nationalist perspective on your questions for a donation of $100 or more. New Paywall subscribers can also commission one article per year. Just send in your questions to [email protected].

A. Wyatt Nationalist can be any Counter-Currents writer, depending on your question and which writers are available. This week’s topic comes from J.S. and is discussed by yours truly.

After Donald Trump was first elected in 2016, large numbers of liberal Democrats and Leftists declared that Trump was an authoritarian, a fascist, and a threat to democracy. If they really believed this, why wouldn’t they have tried to steal the election in 2020?

I think this is a very good question and a very good way to frame the issue of the stolen election. It is fairly easy to find people who called Trump a fascist and a threat to democracy. If you were to discuss the issue of the stolen election with them Socratically, it would be simple enough to back them into a corner where they are forced either to advocate election theft or simply go silent. This is true whether they actually believe Trump was a fascist or not.

Of course, it is always possible that accusations that Trump was a fascist and a threat to democracy were disingenuous. But why would one put forward such disingenuous claims? Obviously, it was an attempt to gaslight the public. Why gaslight the public with such claims? Obviously, the aim was to gin up popular hysteria to obstruct or abort the Trump Presidency — in effect, to negate the will of the majority by making it impossible for Trump to govern. Essentially, it was an attempt not to fix the election before the fact but to cancel it after the fact. However, if one is willing to use lies to cancel an election after the fact, then why would one hesitate to rig an election before the fact, so that Trump is not elected again?

So if the accusation that Trump is a fascist is sincere, the accuser should feel obligated to fix the election. And if the accusation is insincere, we can at least conclude that the person making it would have absolutely no moral scruples about fixing an election in advance, since he is willing to use dishonest means to sabotage an election after the fact. Either way you interpret it, the widespread charge that Trump was a fascist increases the plausibility that the 2020 election was stolen.

Many people like to point and splutter at this argument, but it is absolutely sound. It is basically the argument for paternalism. Our children want what’s best for themselves, and so do we. But who knows what’s better for a child: the parents or the child himself? The parents. Left to their own devices, children would eat nothing but candy. Thus parents are obligated to force their children to do what’s good for them. (For more on the logic of paternalism, see my essay “Forced to be Free: The Case for Paternalism.”)

Liberal elites see Trump voters as children whose decisions must be ignored when they are mistaken. Given that liberals think this way, it is absurd to believe that they would hesitate to rig an election to save democracy.

» So There’s Been a Nuclear Attack, or, How I Learned to Stop Worrying & Love Eric Adams