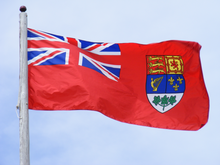 In a pre-pandemic age, Canada Day was a large-scale convivial, nationalistic celebration in Canada’s federal capital of Ottawa with numerous other local events taking place across the country. Normally festivities in the nation’s capital on July 1 feature a full day of events, including military marches by the Governor General’s Foot Guards and the Royal Canadian Mounted Police (RCMP), Snowbird flypasts, continuous music from a mainstage on Parliament Hill, a million people resplendent in red and white in the streets, flag waving, and fireworks. It is customary for Canadians to gather for backyard barbeques and parties as well.

This year’s official proceedings were different. They were a pathetic, dystopian display of a vacuous totalitarian nullity. The new Canada, presided over by Prime Minister Justin Trudeau, is a globalist shell in which white citizens in particular are surveilled, detained, vilified, and held captive by a malevolent woke regime. His communist party has done its best to suck the joy out of existence like a vacuum bomb right before it detonates.

Mr. Trudeau apologized for the country’s existence on Canada Day in a speech replete with saccharine Leftist talking points:

Canada is strong because of our diversity. No matter what our faith is, where we were born, what color our skin is, what language we speak, or who we love — we are all equal members of this great country . . . I know for some, our country’s historic wrongs can make that difficult. But while we can’t change history, we can put in the work to build a better future . . . Let’s challenge ourselves to find new ways to live up to the great promise of Canada . . .

In his article for The Counter Signal, Keean Bexte compared Mr. Trudeau’s sad Canada Day proceedings with former Prime Minister Stephen Harper’s celebration of the national holiday. Trudeau’s Canada Day was a “modern travesty,” while in 2015, “Stephen Harper’s government pulled out all the stops to ensure Canada Day 2015 would remain a cherished memory for those who attended.”

Meanwhile, in Winnipeg, a historic site in the city opted to dispense with the Canada Day moniker altogether in favor of the generic “New Day.” Organizers said that they were “reimagining a Canada Day, a new day, that includes a reflective, inclusive, and fun day for everyone to come together.”

There was an unprecedented police presence this year as well. According to the Ottawa Citizen, “Twelve people were arrested and 50 criminal charges were laid by Ottawa police throughout the Canada Day celebrations in the city’s downtown core.” It is understandable for there to be an increased police presence during major celebratory events. This year was different, however, as the regime in Ottawa feared the arrival of Canadians that sympathized with the truckers of the Freedom Convoy.

Security was ramped up: “The stepped-up enforcement by Ottawa police began on June 29 and ran through July 3, involving police public order units, traffic teams, Quick Response Teams and a fleet of tow trucks in anticipation of large crowds.” The official embattled atmosphere created by Ottawa’s mayor, Jim Watson, and Mr. Trudeau was reminiscent of their authoritarian overreaction to this past winter’s Freedom Convoy protests: They vilified patriotic citizens as racists and homophobes, anti-democratic Islamophobes, and misogynistic reactionary radicals emerging from the fringes. And then they used militarized police to beat them in the streets.

The Prime Minister, along with colluding mainstream media, academics, antifa, and any number of Leftist foot soldiers, employ a “revised communist jargon borrowed from the defunct Soviet Union.” In his article in The Occidental Quarterly, Tomislav Sunić goes on to state that

[t]he Soviet talk was once the daily menu of the communist propaganda in Eastern Europe, its goal being to dehumanize, demonize and criminalize political opponents. The language processing was simple — it consisted in reversing the meaning of words and redefining political concepts.[1]

Mr. Trudeau and his allies have employed these tactics against Canada’s symbols.

Canada’s flag until 1965 has been appropriated by white supremacists to symbolize their desire to return to a time when Canada was whiter — before multiculturalism became national policy — and celebrate colonialism. It was popular with groups such as Blood and Honour and Aryan Guard, who flew it at rallies. Young white supremacists have used it extensively in their propaganda.

Even the red maple leaf has received similar treatment in the mainstream press. A columnist in the mainstream daily, the Ottawa Citizen, writes that Canada’s current national flag, unofficially known as the Maple Leaf, has been co-opted by far-Right extremists as well. He writes that, for some who support Justin Trudeau and opposed the Freedom Convoy, the sight of the current national flag is likely to give them “the sickly feeling that comes with the knowledge that the core beliefs we’ve always recognized as inherently Canadian are not so universal.” These so-called “core beliefs” are a radicalized version of liberalism or cultural Marxism.

The present regime that holds sway in Canada continues to move towards Leftist authoritarianism. Mr. Trudeau is hoping to sever the people’s historical roots. While the ideological Left frequently makes claims that when benign cultural symbols wielded by whites are linked inexorably to National Socialism and white supremacy, it is useful to show that Leftist ideology leads to extreme forms of depravity and ruthlessness. An extreme example of such a trajectory’s end point is the notorious Pitesti Prison in Communist-occupied Romania.[2] In his review of Dumitru Bacu’s book entitled The Anti-Humans: Student Re-education in Romanian Prisons, William Sun points out that nationalist students in Romania were targeted for brutal Communist “re-education experiments” between 1949 and 1951.[3]

The horrific psychological torture that nationalist students were subjected to at Pitesti Prison is summarized by the author: “The students were obliged to crush underfoot everything they held sacred — God, family, friends, love, wife, colleagues, memories, ideology — everything which bound them to the past, anything that might give them inner support while in prison.”[4] While Canada is not at the point of torturing political dissidents, examples such as this should serve as a warning when regimes descend into radical egalitarian authoritarianism. The citizenry must push back against this trajectory.

Even media personality Joe Rogan denounced Justin Trudeau as a dictator and said that Canada was Communist. On a recent episode of his popular podcast, Mr. Rogan condemned the Canadian Prime Minister for his brutal crackdown on the Freedom Convoy trucker protests in the winter of 2022.

All is not lost, however, as there are still millions of Canadians — like our American neighbors who still enthusiastically celebrate Independence Day — who are resisting the neo-liberal cultural and political juggernaut.

In a poll conducted by Leger, respondents were asked a variety of questions regarding Canada Day, including whether or not it should be cancelled. When responding to the question “Do you feel with all the questions about Canada and its historical record, it would be best to cancel Canada Day this year?” the vast majority of respondents (77%) wanted to keep it. This is a good sign. Whether it’s American patriots, Canadian truckers and their allies, or farmers in The Netherlands, it is crucial to push back against Leftist authoritarianism and Communism. The overwhelming tendency of our hostile elites throughout the Western world to impose radical egalitarian palliatives[5] must be resisted.

[2] William Sun, “Communism in Romania: The Horrors of Pitesti Prison, Review of The Anti-Humans: Student Re-education in Romanian Prisons by Dumitru Bacu,” The Occidental Quarterly 17, no. 2, (Summer 2017): 111-9.

[5] Kevin MacDonald, “Introduction” in Lothrop Stoddard, The Revolt Against Civilization: The Menace of the Under-Man, (Shamley Green, UK: The Palingenesis Project, 2011), ix.

« Counter-Currents Radio Podcast No. 465 Ask Me Anything with Greg Johnson