Let the Whites Be Racist, Too 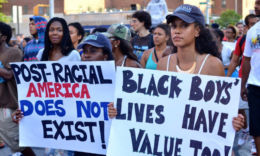 Have you noticed that for all the endless infantile gibberish you hear about “racial justice,” no one has ever bothered to define exactly what this elusive phantom means, nor has anyone attempted to come up with some unit of measurement to gauge the precise moment when we’ve crossed the Racial Justice Finish Line and everyone can go back to enjoying themselves without this exhaustingly endless spiral of hectoring and resentment?

If you have a goal, wouldn’t it make sense to know what that goal is and when it’s been achieved? Or is the fact that they keep moving the goalposts evidence that they can’t define the goal, either, and are simply grabbing as much power as they can before someone musters the gumption to stand in their way? Or does it suggest something even more malevolent: that the racial-justice peddlers always had a goal in mind, but it ran completely counter to the benign, sunshiny goal they originally sold to us?

About a generation ago, “racial justice” seemed to connote a post-racial society where everyone lived in racial harmony, but you hardly hear either of those terms anymore. Nowadays, “racial justice” is all about demonizing “whiteness” and “dismantling white supremacy.”

In other words, as “racism” used to be defined, the very concept of “racial justice” became a lot more “racist” over the years. Harmony no longer seems to be an objective. It’s been replaced by revenge, which is a more honest word for “justice” and never leads to harmony.

But for the sake of argument, let’s suspend disbelief and pretend that the goal has always been a multicultural nation without major friction between those multiple cultures — a post-racial society that isn’t absolutely obsessed with race. As quixotic and dimwitted and ultimately impossible as that goal may appear if you understand anything about race and human tribalism, let’s pretend that this goal is both desirable and achievable.

I can’t conceive of a more doomed-to-fail way of achieving that goal than how the racial-justice game is currently being played.

Even though “racism” is an entirely subjective term whose meaning paradoxically expands the more we allegedly achieve “racial justice,” for the purposes of this piece, let’s define “racism” as “defending the interests of one’s racial group.” It would seem to be a natural, biological right — and it currently is, for all groups except whites.

According to the new rules, whites — and only whites — must be shamed and terrorized and guilt-tripped into believing that they are unique among human groups in that, whereas collective pride and self-esteem is healthy and to be applauded among all others, it only becomes toxic when whites attempt to indulge in such things. For example, the supposedly non-biased Wikipedia famously treats terms such as black pride and Asian pride with affection and reverence, whereas it depicts white pride as analogous to testicle cancer.

That sounds extremely “racist” — at least toward whites. But now they’ve changed the rules to where it’s impossible to be racist toward whites. One begins to suspect that the rule-makers are absolutely full of shit.

According to the old rules, it would have been “racist” not only for whites, but also for blacks or browns or yellows to put their group’s interests ahead of the post-racially harmonious rainbow society we had all been persuaded, cajoled, and brainwashed into thinking was desirable.

Let’s say your goal is to get a broken family to talk to one another and resolve their differences. But instead of telling them to get past their old grievances and focus on the ties that bind, you target one family member as the source of all their woes. You encourage all other family members to resent, taunt, extort, and threaten this family member, and you forbid the “evil” family member from acting in self-defense. If he even dares to make a single measly peep, it will only be taken as a sign that he’s not only evil, he’s in denial about it and is therefore doubly evil.

What do you think are the long-term odds that this family will get along? What person with even a basic grasp of human and social psychology would think this is going to end in anything besides disaster? As the sage Ted Kaczynski observed long ago, rather than soothing racial tensions, “the activists’ hostile attitude toward the white majority tends to intensify race hatred.”

Maybe intensifying racial hatred was the goal all along.

Weren’t racial double standards supposed to be the problem in the first place? Who came up with the bright idea that the solution to institutionalized racial double standards was revenge-based racial double standards pointing in the opposite direction? What sort of good can come from a society where one race is demonized and all others are held as sacred? Where one group is commanded to live in shame, while all other groups are encouraged to bask in pride like pigs in slop? When did “two wrongs make a right” cease to be a primary logical fallacy and instead became a recipe for world peace?

Oh, how little thought it takes to have a belief. It’s startling how many people have blindly accepted that this game — the one with completely different rules for each side — is the Only Way Forward without spending a second to wonder where it will all lead and if it’s even possible to get there.

For all we hear about how it’s “racist” to notice that some groups appear, on average, to be better at some things than other groups, many “racists” seem to think this is merely the result of a morally neutral evolutionary process. But this new narrative about white self-interest being the cause of all human suffering throughout history is far more hateful than noticing that Mexicans don’t appear to be all that great at basketball. Saying a group is inherently evil is far worse than saying they conspire in self-interest (as is often said of Jews) or have undesirable traits as a result of evolutionary selection pressures (as is often said about blacks). Ironically, this new iteration of “anti-racism” manages to be the most “racist” thing possible.

Either racial identity should be for everyone . . . or for no one. The idiotic current double standard is a prescription for disaster on an unimaginably bloody scale. Either letting everyone be “racist” — or stigmatizing racial identity for everyone, the way it’s currently done for whites — would lead to more harmony than the current double standard, which by its very nature is a blueprint for conflict.

If you’re saying only one group can ruin the world if it acts as a group, you’re paying that group a huge compliment. Why are you so afraid of a white population that doesn’t have its hands tied behind its back?

Maybe you’re secretly fearful that when whites act in tandem, they wind up ruling the world? Wouldn’t that make you a “white supremacist”?

Clearly, the only way to avoid being tagged and bagged as a white supremacist is to allow white people to see themselves as a group with common interests. In the interest of equity, let the whites be “racist,” too. Allow us merry whites to be just as joyously self-interested as everyone else is encouraged to be. Let’s all be happily racist together. America, I think you have it in you!

« Counter-Currents Radio Podcast No. 410 The Writers’ Bloc with Kathryn S. on The Ancient City