Refugees Are Back — & So Is the Bible! 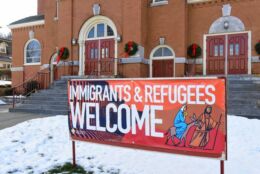 Hundreds of thousands of Afghans are fleeing their country for the West. We’re set for another replay of the 2015 Syrian crisis. Yet, this time Europe doesn’t want the refugees. France’s centrist president Emmanuel Macron vowed to block the gates to the Afghan hordes, and Greece expanded and fortified its border wall ahead of the flood. Europe won’t open its arms to millions of migrants again this time.

The same can’t be said of America’s political class. Nearly every politician and pundit wants as many Afghans here as possible. One of the main arguments for it? The Bible tells them so.

Conservative radio host Erick Erickson believes we must take in refugees in order to avoid civilizational collapse. “In scripture, one of the signs of a fallen land is its rejection of refugees,” he tweeted. “People who say we are in Romans 1 territory who also say we shouldn’t take in real refugees are complicit in getting us to Romans 1 territory.” Romans 1 exhorts Christians to convert the Gentiles from their sinful ways and warns of God’s wrath for those who disobey his laws.

NeverTrumper David French deployed the Bible to not only defend refugee resettlement, but to justify the Afghan War itself. He quotes one scholar who finds that scripture says “the protection of strangers and foreigners is a sacred duty or obligation” — which means you must accept tens of thousands of unvetted refugees. Citing a Heritage Foundation apparatchik, French claims the Afghan intervention and occupation fit Christianity’s just war tradition because it supposedly alleviates human suffering and is superior to inaction.

To welcome those who first welcomed us 20 years ago, who helped us hunt down the enemy who attacked us on 9/11 is simple gratitude. This is especially important for Christians, whose lives are to be marked by thankfulness and generosity, by keeping our promises. In Matthew 5, Jesus told his followers about the importance of keeping our word, “Let your ‘Yes’ be ‘Yes,’ and your ‘No,’ ‘No.’ Anything more comes from the evil one.”

Republican Arizona Gov. Doug Doucey cited Ephesians 2:19 — “So then you are no longer strangers and sojourners, but you are fellow citizens with the holy ones and members of the household of God” — in his statement in support of refugee resettlement.

“When an alien resides with you in your land, you shall not oppress the alien. The alien who resides with you shall be to you as the citizen among you; you shall love the alien as yourself, for you were aliens in the land of Egypt: I am the Lord your God.” Leviticus 19:33-34 https://t.co/DQvo8iLWrV

“You shall not oppress a resident alien; for you know well the heart of the alien, for you were aliens once, in the land of Egypt.” Exodus 23:9. https://t.co/8xM1pVFukA

Even non-Christians used the same tactic. CNN host Jake Tapper, a Jew, weaponized the New Testament — -a text he gives no authority — to criticize refugee skeptics:

In spite of all the talk about secular America, religious arguments still remain popular. Similar arguments were made in support of Black Lives Matter and “racial justice.” For instance, French recently used the Bible to defend white guilt indoctrination in schools. He said the story of King David making amends for Saul’s sins against the Gibeonites provides a biblical justification for making kids listen to black grievances. The former National Review writer is an avowed Evangelical, so it makes sense that he would regularly cite scripture. But this isn’t just an argument made to fellow believers. Scriptural authority carries weight with the rest of society — so long as it aligns with liberal orthodoxy.

Many Right-wingers would denounce this as heresy and respond with their own arguments from the Bible or Christian philosophers. But those carry far less weight in our society. Christianity, as understood by the masses, means just being nice to one another — or, as Tom Holland argues in his book Dominion, “love is all you need.” These messages are fully complementary with liberalism and underline much of its agenda. Sure, many people still acknowledge that Christianity isn’t supportive of gay marriage or sexual promiscuity. But those are considered less important than the message of universal love.

It’s not an original take to notice liberalism’s roots in Christianity. The European New Right has argued this for decades. But mainstream writers rarely make the direct argument, even if they will turn to scripture to argue for open borders and reparations. Holland, a popular historian, makes this connection in Dominion. He highlights how Christianity acted as a progressive force within Western civilization. It laid the foundations for human rights and offered a universal moral system that taught that all men were created in God’s image. Holland sees Christianity’s influence even in modern secular trends that are hostile to organized Christianity, from women’s rights to Communism.

The book was published before the George Floyd era, but it does note the Christian influence on similar movements. “Any condemnation of Christianity as patriarchal and repressive derived from a framework that was itself utterly Christian,” he writes of the women dressing up as handmaids to protest Donald Trump. Holland agrees with Nietzsche’s assessment of Christianity as an inversion of Classical morality and which prizes victimhood and weakness. Even though Holland shares Nietzsche’s lack of faith, the modern-day author sees this Christian influence as a good thing.

Of course, this does not mean every Right-winger should apostatize and become resolutely anti-Christian. The majority of whites are Christian and our movement must welcome them into our ranks, but we should at least recognize the role Christianity plays in our present crisis.

Theoretically, Christian institutions could oppose all the threats to the West without violating scripture. But they choose not to. Nearly every Christian institution champions our dispossession and condemns “racism” as a sin. Moreover, scripture and Christian teachings — regardless of how much they may be divorced from proper context — buttress arguments in favor of open borders and racial equity. While most Americans no longer regularly attend church and wince at overt displays of the faith, the majority are still Christian, and they can still be persuaded to support open borders and racial grievances using scriptural appeals.

This stands as one of the major issues for our side. Yes, many bad faith actors deceptively use the Bible, but that doesn’t erase the fact that these people can find plenty of material in the faith. And these arguments convince many well-meaning white people to welcome illiterate Afghans with open arms.