Knut Hamsun’s Growth of the Soil 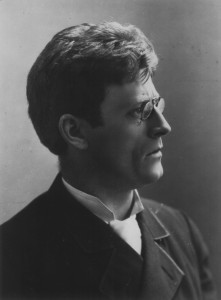 Knut Hamsun’s 1917 classic Growth of the Soil seems to defy the fundamental conflicts found in most fiction. It is a mystifying novel. One can pigeonhole it as modern with its use of stream of consciousness, flashbacks, and other literary techniques. It’s also considered part of a literary movement called Norwegian New Realism, which was highly influential beyond Norway in the first half of the Twentieth Century. Most interesting for dissidents, the novel reflects the near mystical connection Man has with the soil, consecrated through hard work and family.

The story, such as it is, centers around Isak of Sellanraa, a settler who breaks a patch of uninhabited land in the north and eventually develops a thriving farm. Early on, we meet his hare-lipped wife Inger, and later get to know their children and neighbors. But Isak, an indomitable mountain of a man, remains the centerpiece of Growth of the Soil. Chapter after chapter, Hamsun chronicles Isak’s progress as a farmer, husband, and father. Later, the story branches into the dramas of his children and neighbors. And besides a few notable exceptions, nothing happens apart from life. Building a shed may be interesting when you do it. You plan the design, buy the materials, budget the time, and then get to work. And if you have to get it done before St. Olaf’s Day otherwise you won’t have a place to store your hay for the winter, then the suspense will be there. In three dimensions, the suspense will be there. But with only two dimensions on a page, such an enterprise as fiction would be death.

The book is remarkable because its inherent struggle cannot easily be pinned down. There is no plot, no suspense pulling the story forward, no desired object or goal in the end. Much of the action is mundane. Although there are acts of evil and sin in Growth of the Soil, there is no prime antagonist, no Man-Against-Man struggle to speak of. Aside from a basic religiosity of some of its characters, there is no sense of the supernatural—so Man-Against-God can be ruled out. Despite being fully fleshed out, most of the characters lack the self-awareness for deep introspection, so calling it Man-Against-Self would be a stretch. Despite a few dry seasons, most of the farms do pretty well, so Nature is kind of a pushover. What else? Man-against-Time? It’s not a thriller and there is no ticking clock, so no. Man-against-Woman as on the battlefield of love? No. Isak pretty much bags Inger early on and despite a few hiccups keeps her throughout.

The only kind of conflict that comes close is Man-Against-Society. Hamsun sets up a clear dichotomy between the wilds of Sellanraa where simple folk labor endlessly, and the town where sophisticated folks work in shops and offices and wear hats and shoes and show off fancy umbrellas. In Hamsun’s world, the town can change a person, and often not for the better. The problem is that “society,” as it is represented by the town with all its stringent rules and feckless ways, is so benign that it doesn’t hold up its end of the conflict at all. People are actually nice in the town, and whenever the farming community denizens run afoul of town authorities, they are treated with respect and compassion. Indeed, Sellanraa needs the town and the town needs Sellanraa. The two never cease to cooperate throughout the novel.

So what is Growth of the Soil about then if it is not about any of these things? All I could come up with was something I had never encountered before in a novel: Man-Against-Corruption. Or, more accurately, Innocence-Against-Corruption. That’s what kept the pages turning for me. Will this or that character lose a little bit of his or her soul after engaging with the highfalutin so-and-so or after spending several years in town? Is there anything chipping away at their innocence, and if so how will they ever get it back? The beauty of this wonderful novel can be found in how Hamsun makes the reader cling to and cherish innocence while becoming engrossed in the daily lives of these people. We are also meant to feel the pain and loss of corruption—even if the corrupted ones themselves do not.

With this kind of sublime struggle, plot actually becomes beside the point, almost vulgar. And how did Knut Hamsun know that this approach would work in a novel of some 400 pages before sitting down to write it? Any answer beside genius becomes less and less convincing the more we ponder.

Isak, most notably, does not have people. No family, no definite history.

The man comes, walking toward the north. He bears a sack, the first sack, carrying food and some few implements. A strong, coarse fellow, with a red iron beard, and little scars on face and hands; sites of old wounds—were they gained in toil or fight? Maybe the man has been in prison, and is looking for a place to hide; or a philosopher, maybe, in search of peace. This or that, he comes; the figure of a man in this great solitude.

If anything, Isak, with his strength, work ethic, and incorruptibility, is part of nature himself. This is a refreshing aspect of Hamsun’s fiction: Man is born innocent; there is no original sin. Nothing to be ashamed of. He belongs on Earth as much as bird or beast. Man works the land, eats, sleeps, and makes babies with his wife. In this, he attains a state of grace. Yet Isak is no dullard—uneducated and inarticulate, yes, but he has vision. He understands his crops and his livestock. He knows when to act; he knows when and how to build. He has a genius for building, and nearly singlehandedly puts up around a dozen sturdy structures across his farm. At one point, he walks a full day back home through the woods and moors with an iron cooking stove on his back. In some ways, Sellanraa is Hamsun’s Eden. Man achieves this natural state of grace and is rewarded for it, not with money, but with prosperity. Further, when man eschews this grace, whether through sloth, vanity, greed, or some other personal shortcoming, he’s punished. Usually, this means various degrees of poverty and shame. If there is a God in Hamsun’s universe, it’s a just one.

Hamsun’s language reinforces the biblical nature of the story. It’s almost like reading the Book of Chronicles—seasons come and seasons go, and between them Hamsun treats us to isolated patches of dialogue or even mere exclamations. I have never read an author who does so little to establish scenes.

It was a grand time after that. For a long while, Inger could not do enough in the way of showing her husband how good and useful she could be. She would say to him now, as in the old days: “You’re working yourself to death!” Or again: “‘Tis more than any man can stand.” Or again: “Now, you’re not to work any more; come in and have dinner—I’ve made some wafers for you!” And to please him, she said: “I should just like to know, now, what you’ve got in your mind with all that wood, and what you’re going to build, now, next?”

Ay, just as in the old days. And after the child was born—and it was a little girl—a great big girl, fine-looking and sturdy and sound—after that, Isak must have been a stone and a miserable creature if he had not thanked God. But what was he going to build?

For all its pater-familial trappings, the most well-rounded and dynamic characters in Growth of the Soil tend to be women. The cunning, insinuating Oline, and the sly, amoral Barbro will stick with the reader long after the book is put down. The former, an old woman, is a master of perception and manipulation who can be insidiously cruel if it means solidifying her position in a particular household. Barbro, on the other hand, uses Machiavellian logic to justify her wrongdoings and has a cutting wit besides. In both cases, however, these women are at least partially exonerated by their propensity for work. In Hamsun’s universe, it seems, honest toil can cleanse all sins.

As for Inger, she is a big, buxom girl who would have been a beauty by local standards if not for her harelip. She’s drawn to Isak because no other man would have her, and because Isak is interested in the business of having a wife, not the romance. He is, of course, fair and respectful towards her. When she commits a horrific crime, he forgives her and misses her while she’s incarcerated far away. When she returns, though, she has been touched by the town and suddenly finds herself superior to her indefatigable husband. She has new skills and new ideas and a newly-acquired flirtatious eye for men. She has become a different woman, and much of the suspense surrounding Inger deals with whether she will return to the state of grace she shared with Isak at the novel’s onset.

The novel concludes years later with the enigmatic and generous Geissler, a singular genius who discovers a copper mine on Isak’s property early in the novel. With Isak and Inger getting on in middle age, Geissler has this to say to their son Sivert, who stands to inherit Sellanraa. See if you can spot the bit that’s just as relevant to the Right today as it was then.

Listen to me, Sivert: you be content! You’ve everything to live on, everything to live for, everything to believe in; being born and bringing forth, you are the needful on earth. ‘Tis not all that are so, but you are so; needful on earth. ‘Tis you that maintain life. Generation to generation, breeding ever anew; and when you die, the new stock goes on. That’s the meaning of eternal life. What do you get out of it? An existence innocently and properly set towards all. What you get out of it? Nothing can put you under orders and lord it over you Sellanraa folk, you’ve peace and authority and this great kindliness all round. That’s what you get for it. You lie at a mother’s breast and suck, and play with a mother’s warm hand. There’s your father now, he’s one of the two-and-thirty thousand. What’s to be said of many another? I’m something, I’m the fog, as it were, here and there, floating around, sometimes coming like rain on dry ground. But the others? There’s my son, the lightning that’s nothing in itself, a flash of barrenness; he can act. My son, ay, he’s the modern type, a man of our time; he believes honestly enough all the age has taught him, all the Jew and the Yankee have taught him; I shake my head at it all.

For the inhabitants of the farms and the wilds, innocence is a burden—and corruption is sweet. One must always do battle with the other, and the stakes are ever so high. It’s a universal circumstance, as old as humanity, and something beautifully depicted in Growth of the Soil.