Did Heidegger Say the Holocaust Was Jewish “Self-Annihilation”? 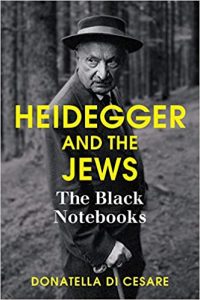 One of the most sensational charges against Heidegger is that he claimed that the Holocaust was the “self-annihilation” (Selbstvernichtung) of the Jews. This charge was first made by Italian philosophy professor Donatella di Cesare in an article in Corriere Della Sere on February 9, 2015: “Heidegger: ‘Jews Self-Destructed’: New Black Notebooks Reveal Philosopher’s Shocking Take on Shoah.”[1] Di Cesare writes:

The Shoah was an act of self-destruction by the Jews. This is the view that emerges from the new volume of Heidegger’s Black Notebooks, edited by Peter Trawny and soon to be published by Klostermann (Gesamtausgabe 97, Anmerkungen I–V). The 560 pages of new material date from the crucial 1942–1948 period . . . The argument is that the Jews destroyed themselves and no fingers should be pointed at anyone except the Jews themselves.

Di Cesare expanded upon this thesis in her book Heidegger, die Juden, die Shoah, which was published in October of 2015 and translated into English in 2018 as Heidegger and the Jews: The Black Notebooks:[2]

In keeping with his metaphysical anti-Semitism, Heidegger interpreted the extermination of the Jews as a “self-annihilation”: the Jews would annihilate themselves. Agents of modernity, complicit with metaphysics, the Jews followed the destiny of technology . . . For Heidegger, no one but the Jews themselves could be called to account. The blame for their extermination fell onto them . . . (pp. 201–202) 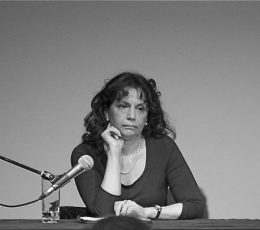 Di Cesare’s argument is complete hogwash. As an interpretation, it is baseless. First, Heidegger is not referring to the Holocaust. Second, Heidegger writes about the “self-annihilation” of modernity, not the Jews. Third, the question of blame never enters into Heidegger’s discussion. Beyond that, di Cesare formulates her charges in the most sensationalistic possible terms, which smells of malice and cynicism. She is both smearing Heidegger and promoting her book and career.[3]

Let’s look at the original Heidegger quote before we take apart her interpretation.

The passage in question consists of three connected paragraphs from a notebook dated circa 1942 to 1945. The first paragraph reads:

The anti-Christian [der Anti-christ], like every “anti,” must stem from the same essential ground as that against which it is “anti”—that is, the same essential ground as “the Christian” [“der Christ”]. The Christian stems from Jewry [Judenschaft]. In the timeframe of the Christian West, that is, of metaphysics, Judaism is the principle of destruction. What is destructive in the reversal of the completion of metaphysics—i.e., of Hegel’s metaphysics by Marx. Spirit and culture become the superstructure of “life”—i.e., of economics, i.e., of organization—i.e., of the biological—i.e. of the “people.”[4]

This passage is clearly from a notebook. Heidegger jumps from topic to topic without clear links, perhaps because he has not fully worked out his ideas.

First of all, Heidegger states that all opposition to Christianity somehow secretly affirms Christianity. But is this necessarily the case? Or is it true only of certain forms of opposition, such as liberal secular humanism, that reject Christian religious tenets but affirm and intensify Christian values?

In what sense is Judaism the principle of destruction within the age of metaphysics and the Christian West? This view seems to echo the anti-Semitic trope formulated by Theodor Mommsen that Jews are the “ferment of cosmopolitanism and national decomposition” in non-Jewish societies.[5] But it would make more sense and be more consistent with Heidegger’s other statements about Jews in the Black Notebooks if he spoke of Jews as a people rather than Judaism as a religion. (See my “Heidegger and the Jewish Question.”)

Judaism is present in Christianity at the beginning, but the principle of destruction manifests itself near the end of Christianity and metaphysics, i.e., in the emergence of modernity, i.e., the age of rootlessness and unbounded technological nihilism.

This age is “Jewish” insofar as Jews, being a mercantile diaspora people, are well-adapted to flourish in it. Thus Jews become unusually powerful in modernity and help drive it to its completion. This reading coheres with Heidegger’s other statements about Jews. (See my “Heidegger and the Jewish Question.”)

Heidegger’s next remark seems to be an illustration of this principle: Marx’s inversion of Hegel’s metaphysics, transforming the realm of spirit and culture into a superstructure upon an economic basis. Marx, of course, was Jewish. But then Heidegger equates Marxist materialism with non-Jewish philosophies that treat spirit and culture as manifestations of more basic material forces. The first material force is “life,” which Heidegger himself puts in quotes. This is an allusion to Nietzsche and the tradition of “life philosophy” (Lebensphilosophie) he inspired. Then Heidegger cites two more materialist principles: “economics” and “organization.” The first clearly refers back to Marxism, perhaps the second as well. (I am not sure what else it might refer to). Then Heidegger cites the “biological” and the “people” (Volk), the latter term in quotes as well. These are references to National Socialism, which leans heavily on both biological race and the concept of the people. Thus Heidegger is equating Marxism, Nietzscheanism, and National Socialism.

What do Marxism, Nietzscheanism, and National Socialism have in common? Their modernist materialism, their reduction of the cultural and spiritual to a material base reality. What they don’t have in common is Jewishness.

Thus, on Heidegger’s premises, it is superficial to identify Judaism or Jewishness as the “principle of destruction.” Jews are certainly prominent exponents of modernist materialism. But so are Americans, Russians . . . and Germans. Thus Jews are only part of the problem. Thus when Germans identify the flaws of modernity with the Jews, they are overlooking the same flaws in themselves. (When a part stands for the whole, it is a literary trope called synecdoche. In deductive logic, when one attributes the characteristic of a part to the whole of which it is a part, it is called the fallacy of composition. In inductive logic, falsely attributing the traits of one member of a group to the whole group is called hasty generalization.)

At this point, Heidegger has laid the groundwork for his shocking conclusion:

When what is “Jewish” in the metaphysical sense [the National Socialists] combats what is Jewish [namely actual Jews], the high point of self-annihilation in history has been attained—supposing that the “Jewish” has everywhere completely seized mastery, so that even the fight against “the Jewish,” and it above all, becomes subject to it.

First, Heidegger’s premise, that “the ‘Jewish’ has everywhere seized mastery” is the assertion that modernity has everywhere seized mastery, including in Germany. But the Germans simply call whatever they don’t like about modernity “Jewish.” By putting “Jewish” in scare quotes, Heidegger distances himself from that usage. Heidegger’s point is that National Socialism itself turns out to be “Jewish” in that sense of the word.

Heidegger is not saying that Jews in the factual sense annihilated themselves in World War Two. The “self” that is engaged in annihilation here is not Jewry but modernity. The confusion arises because the National Socialists superficially identified modernity with the Jews, not realizing that by that standard they themselves were somehow Jewish.

On this basis one must assess what it means, for thinking that enters the concealed, inceptive essence of the history of the Occident, to meditate on the first inception among the Greeks, which remained outside Judaism and thus outside Christianity.

If one remains entirely on the plane of modern nihilism, it is futile to resist one form of nihilism with another. In the final paragraph, however, Heidegger’s discourse shifts to another plane. This shift is signaled by his reference to the “thinking that enters the concealed, inceptive essence of the history of the Occident,” the realm from which modernity emerged—and from which a genuine alternative to modernity might emerge.

How can such thinking contribute to a new beginning? Heidegger’s only suggestion here is to “meditate on the first inception among the Greeks, which remained outside Judaism and thus outside Christianity.” We can free ourselves from the Judeo-Christian cultural legacy by reconnecting with the other origin of the Western civilization, namely pagan Greece.

But this is not the whole story for Heidegger, because the ancient Greeks are also the source of the metaphysical tradition that gives rise to modern nihilism. Thus, we must attune ourselves specifically to the pre-Socratic, pre-metaphysical Greeks like Heraclitus.

Who Said Anything About the Holocaust?

The first problem with di Cesare’s argument is that Heidegger is not talking about the Holocaust. After the Second World War, it is quite natural to think of the Holocaust when reading a National Socialist writing about Jews and annihilation. But the timing is wrong. The passage in question is from circa 1942 to 1945, probably closer to 1942.

This is consistent with Heidegger’s other usages of “self-annihilation” in the Black Notebooks. For instance, in a comment from 1941, Heidegger argues that the Soviet assault on Western civilization is essentially the West’s self-annihilation, because Marxism and Soviet technology are both Western: “Insofar as technology and communism assault the West out of the East, in truth the West is assaulting the West in an uncanny self-annihilation of its own powers and intentions.”[6] He also claims that the American onslaught against Europe is essentially Europe’s self-destruction, since Americans are Europeans.[7]

Finally, if Heidegger is not talking about the Holocaust and not claiming that the Jews annihilated themselves, then he obviously can’t be blaming the Holocaust on the Jews.

However, the whole thrust of Heidegger’s later philosophy is “anti-humanist,” meaning that behind grand historical trends—like the emergence of the modernity that enthralls us all—there’s no subjectivity, no agency, nobody to blame.

[3] Robert Bernasconi has essentially the same interpretation of Heidegger’s text: “Heidegger’s appropriation of the term self-annihilation in the context of the Holocaust is unconscionable.” He does not, however, cite di Cesare, so he may have simply made the same mistake. See Robert Bernasconi, “Another Eisenmenger? On the Alleged Originality of Heidegger’s Antisemitism” in Heidegger’s Black Notebooks: Responses to Anti-Semitism, ed. Andrew J. Mitchell and Peter Trawny (New York: Columbia University Press, 2017), p. 178.