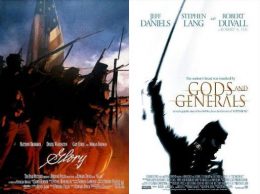 There was a time that the American mainstream was really interested in the US Civil War of 1860-1865. That time was before Obama’s gloomy second term empowered the insane asylum of weeping non-whites, deviants, mattoids, and Marxists that rejected all American history as evil except for the semi-fable of the saintly Sub-Saharans of 1619.

I’m uncertain of what led to this massive interest, but can speculate that there were several intersecting causes. Indeed, the story of the conflict — its rainy marches, desperate charges, and cannonades — is very interesting in its own right. Furthermore, just as America started to commemorate the centennial of the conflict, the same sorts of racial problems that led to the war resurfaced in the form of the “civil rights” movement, thus giving a sharp edge to historical study. Finally, there was Bruce Catton (1899-1978).

Catton wrote a brilliant series of Civil War histories in the 1950s which inspired a generation of scholars, movie makers, and artists. In the early 1990s, there were many Civil War reenactors and this sub-culture even had its own shibboleths. Some of the reenactors were so dedicated to authenticity they deliberately got themselves sick to duplicate the forlorn look of soldiers one sees in the photos of men in the war. 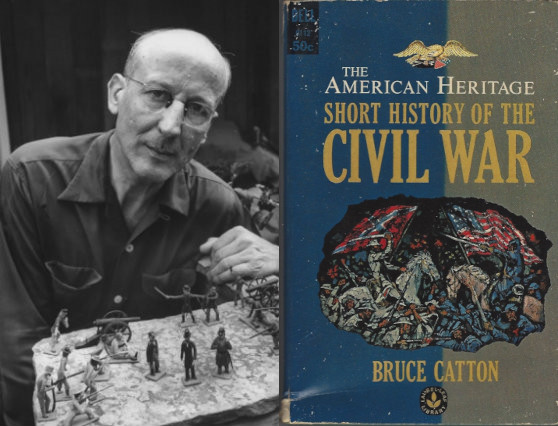 Bruce Catton is probably the best historian of the US Civil War. He was from Michigan, the son of a Congregationalist minister.

Ken Burns’ famous mini-series about the Civil War was broadcast in the fall of 1990. This miniseries took place during the build-up to the Persian Gulf War, so Burns’ images of dead American soldiers from the Civil War juxtaposed next to images of Americans deploying to the desert gave a tangible sense of danger to the news reports coming from Saudi Arabia. 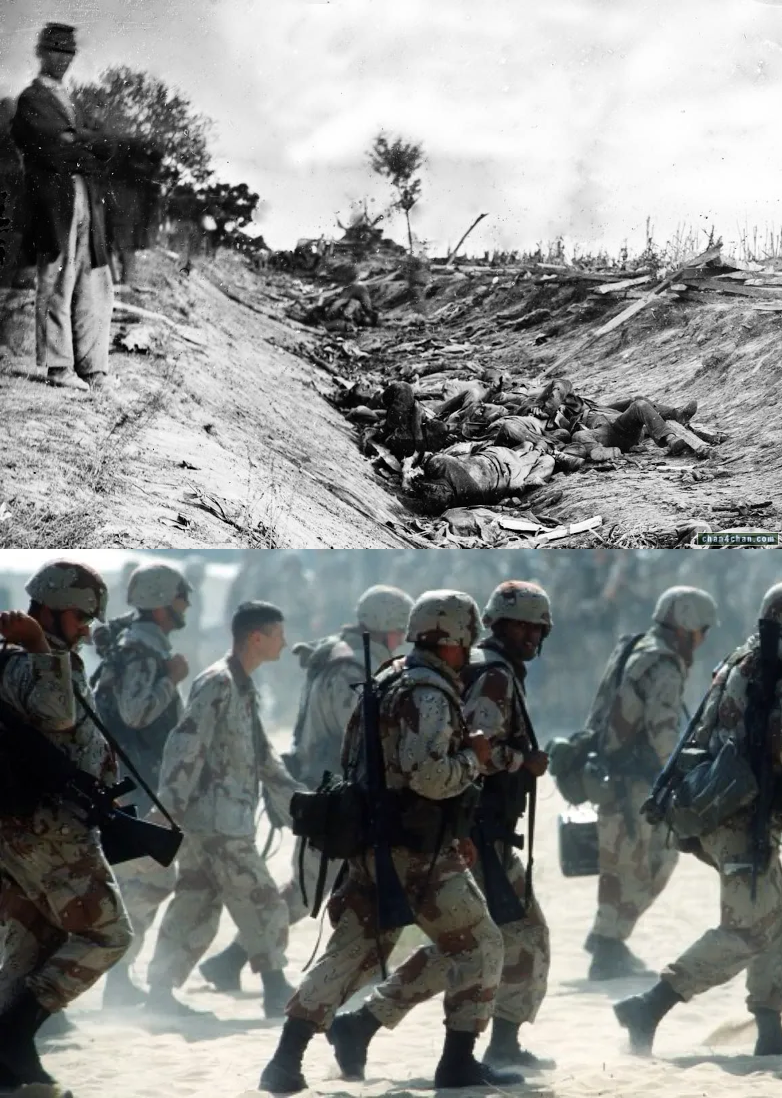 Ken Burns’ miniseries The Civil War (1990) was broadcast as Americans were deploying to Saudi Arabia. Reminding the public of the costs of the Civil War just as a new one was starting created a vast social tension.

Before getting too far into Civil War movies, most films related to the subject — Gone With the Wind (1939) or The Birth of a Nation (1915) are more about the flawed government policy of Reconstruction which took place after than war than the war itself. Additionally, there is the temptation to apply modern ideas of Political Right vs. Political Left to the conflict that doesn’t always match up. We don’t really know what John Brown would have thought about Antifa burning cities in the lead-up to the 2020 election. 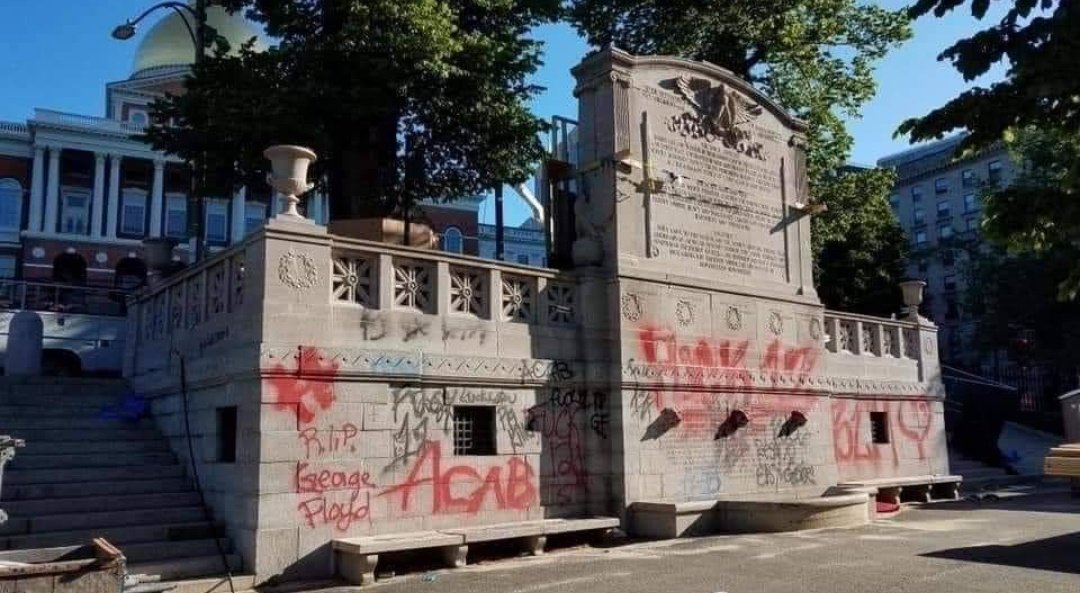 Black Lives Matter activists vandalized the monument to the 54th Massachusetts in 2020. One cannot apply modern political splits to the US Civil War. The conflict today is that of Andrew Jackson’s coalition of Anglo-European Yeomen vs. Obama’s coalition of Sub-Saharans, other non-whites, and spiteful mutants.

There are two interesting movies about the Civil War that should be discussed. The first is Glory (1989) and the second is Gods and Generals (2003). I’ll save you the suspense, Glory is an outstanding movie. Gods and Generals is badly flawed. What makes these movies work or not work is important to explain because the Left produces outstanding fictional works and the Right needs to catch up. Fictional works change minds.

Glory tells the story of the 54th Massachusetts Infantry. The 54th Massachusetts was a regiment led by white officers but otherwise made up of black soldiers. It was led by Colonel Robert Gould Shaw, the blue-eyed child of fortune from Boston. (Robert G. Shaw is played by Matthew Broderick.)

The film starts off with a compelling enactment of the Battle of Antietam, where Captain Shaw gets a minor wound that lands him in the hospital. In the hospital, a medical orderly talks to Captain Shaw about Lincoln’s Emancipation Proclamation while a screaming nearby soldier is having his leg amputated without painkillers.

The hospital scene is a perfect example of what makes Glory so excellent. The cost of freeing the slaves is shown in a stark way without hitting the audience over the head with explanations. Glory is filled with such imagery and has a plot that stays on track from beginning to end.

While home on leave, Shaw is given the opportunity to become the Colonel of a new regiment of black soldiers. He accepts the appointment and gets his first two recruits, Major Cabot Forbes (Cary Elwes) and Private Thomas Searles (Andre Braugher).

The characters of Shaw, Forbes, and Thomas get solid development. In Shaw, we see the loneliness of command. Forbes, Shaw, and Thomas are all childhood friends, but the responsibilities of command mean that Shaw must ensure that Forbes is training the men properly and that he must compel Forbes to back the difficult, correct, but deeply unpopular decisions of Shaw, such as flogging the deserter Private Trip (Denzel Washington).

Thomas ends up having a very hard time with soldiering. In Boston, he was a free person of color working in a prestigious job. In the Army he is just a private, having a hard time with the physical aspects of soldiering thus drawing the ire of the Sergeant Major. He is also bedeviled by the more worldly and authentic blacks who bully him — especially Private Trip.

Another part of what makes Glory so outstanding is how it portrays the friend-enemy distinction. During the Civil War, obviously, the South was the enemy of the North, but in the movies, the only Southerners are unarmed civilians or soldiers doing their duty. The Confederates don’t murder POWs and say no insults. They are a distant enemy. On the other hand, Union army brass and rear echelon officers serve as the villains audiences love to hate. This arrangement makes the critical Southern movie-going audience comfortable with the film.

Trip is exceptionally mean to Thomas and is a troublemaker. Eventually, Rawlins snaps and says:

And what are you? So full of hate you want to go out and fight everybody! Because you’ve been whipped and chased by hounds. Well, that might not be living, but it sure as hell ain’t dying. And dying’s been what these white boys have been doing for going on three years now! Dying by the thousands! Dying for you, fool! I know, ’cause I dug the graves. And all this time I keep askin’ myself, when, O Lord, when it’s gonna be our time? Gonna come a time when we all gonna hafta ante up. Ante up and kick in like men. Like men! You watch who you call a nigger! If there’s any niggers around here, it’s you. Just a smart-mouthed, stupid-ass, swamp-runnin’ nigger! And if you not careful, that’s all you ever gonna be!

This quote is deadly serious. It is an uncomfortable truth about the black relationship with whites — especially Yankee whites. And the statement is made by a black character that whites are sympathetic to.

Blacks in America gained the benefits of being around whites. What whites got from being around blacks was an African criminal caste with a hate-filled ideology. In the end, blacks didn’t free themselves from slavery. Other than a few token regiments like the 54th Massachusetts, they were freed by whites. In the late 1980s and early 1990s, there was a time when it was possible to criticize blacks in the mainstream, and Glory does that even as it makes the men of the 54th Massachusetts heroes.

The movie’s character development and artistic rendition of the attack on Fort Wagner are so good that one feels agony when the Confederate flag is raised the morning after the attack.

The movie ends by saying that Fort Wagner “never fell” to the Union. This is not true. The Union Army captured the fort after they brought in a number of Parrott Rifles (a type of heavy artillery) and blasted the fort into smoking craters, causing the Confederates to withdraw. Had that fact been shown in the movie, the audience might ask why the Union Army didn’t use the Parrott Rifles before they sent the 54th on a hopeless frontal assault?

Gods and Generals (2003) is Ronald F. Maxwell’s follow up to his outstanding made-for-TV movie Gettysburg (1993). It has many of the same actors playing the same characters. Jeff Daniels, for example, plays Joshua Lawrence Chamberlain in both films, but in Gods and Generals, Robert E. Lee is played by Robert Duvall rather than Martin Sheen in the earlier film. Stephen Lang plays General Pickett in Gettysburg and Stonewall Jackson in Gods.

The flaws in Gods and Generals can be listed. First, there is a lack of character development. In Glory, one sees Colonel Shaw grow into the mature leader of men. In Gods and Generals, the officers and men are plastic demigods. Lang’s Stonewall Jackson has no growth or development from start to finish.

Second, the movie is made for reenactors — not a broader audience. There are long scenes where grown men look over uniforms like bridesmaids looking at wedding dresses. Furthermore, the battle scenes don’t contain the gore or pathos that Glory has. Indeed, there are too many long stretches of marching Rebels or Yankees followed up with too many long-winded speeches.

If only that were the case. Thomas Jefferson himself said Southern society had “the wolf by the ears.”

A more compelling story would be that of a white who loves his slaves and think they love him until they murder his family in their beds due to abolitionist propaganda.