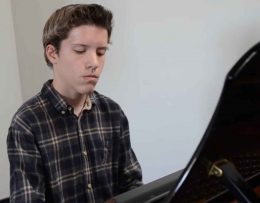 It happens now with accelerating regularity: a white man who is alarmed at white ethnic displacement goes to a place of worship used by non-whites and starts shooting.

As a white person, I look down upon the criminals among us. I do not reflexively defend and glorify them. This was a terrible act: immoral, illegal, and politically damaging to white interests. I hope Earnest receives a fair trial and just punishment, but that seems unlikely given the racially charged atmosphere in America today.

We obviously don’t know all the facts yet, but based on the manifesto attributed to Earnest, he believes that Jews are collectively responsible for a long list of historical crimes, including the ongoing genocide of the white race:

Every Jew is responsible for the meticulously planned genocide of the European race. They act as a unit, and every Jew plays his part to enslave the other races around him—whether consciously or subconsciously. Their crimes are endless. For lying and deceiving the public through their exorbitant role in news media; for using usury and banks to enslave nations in debt and control all finances for the purpose of funding evil; for their role in starting wars on a foundation of lies which have costed millions of lives throughout history; for their role in cultural Marxism and communism; for pushing degenerate propaganda in the form of entertainment; for their role in feminism which has enslaved women in sin; for causing many to fall into sin with their role in peddling pornography; for their role in voting for and funding politicians and organizations who use mass immigration to displace the European race; for their large role in every slave trade for the past two-thousand years; for promoting race mixing; for their cruel and bloody history of genocidal behavior; for their persecution of Christians of old (including the prophets of ancient Israel—Jeremiah, Isaiah, etc.), members of the early church (Stephen—whose death at the hands of the Jews was both heart-wrenching and rage-inducing), Christians of modern-day Syria and Palestine, and Christians in White nations; for their degenerate and abominable practices of sexual
perversion and blood libel (you are not forgotten Simon of Trent, the horror that you and countless children have endured at the hands of the Jews will never be forgiven); for not speaking about these crimes; for not attempting to stop the members of their race from committing them. And finally, for their role in the murder of the Son of Man—that is the Christ. Every Jew young and old has contributed to these. For these crimes they deserve nothing but hell.

I will send them there.

I am sure many more facts will come to light in the coming months and at Earnest’s trial. But still, I can say three things with confidence.

When different peoples are forced to live together in the same system, frictions are inevitable. These frictions give rise to misunderstandings, distrust, alienation, and long-simmering resentments, which flare up into hatred, violence, and social upheaval. Earnest’s actions are predictable consequences of multiculturalism. Sadly, we will only see more such violence until white nations regain their sanity and reverse multiculturalism.

In the case of recent immigrant populations, the best solution is for them to return to their homelands. I also think that is the best solution for groups like Jews, Japanese, and Chinese who have been in America for a long time but still maintain strong ties to their homelands. In the case of American Indians and the descendants of black slaves, territorial partition or semi-autonomous reservations would seem to be in order.

Second, we should resist dismissing Earnest with the all-too-easy claim that he was “crazy.” Yes, Earnest did something evil and stupid. But Earnest’s underlying motive — fear of white race replacement — is not irrational or insane. It is a healthy reaction to objective facts. All white people have innate ethnocentric tendencies, wired deep in our brains. We love our own and we fear strangers. As diversity increases, all of us will bear increased psychic costs, even those who pursue wealth and status by selling out their own people in favor of foreigners.

Earnest and people like him may be nothing more than canaries in a coal mine: the first to sense the presence of a threat to the survival of us all. Earnest may have just been abnormally sensitive to the terrible psychic consequences of losing control of our society to aliens: stress, alienation, anger, hatred, rage, etc. Earnest’s manifesto, in particular, is dominated by a tone of depression and hopelessness. This heightened sensitivity might also go along with a whole suite of other abnormal traits. But we dismiss people like Earnest at our own risk. For in the end, all of us will feel the same effects — unless we heed the warning signs and turn back the rising tide of color.

Third, Earnest’s “solution” to his rage and alienation — killing innocent people — just makes the racial situation worse rather than better. We will surely learn a lot more about Earnest’s ideas and affiliations in the coming months. But based on what we know now, we can say that his actions certainly resemble those of racially-motivated spree killers like Brenton Tarrant (whose example he explicitly cites), Robert Bowers (also mentioned by Earnest), Dylann Roof, Anders Behring Breivik, Wade Michael Page, and Frazier Glenn Miller, all of whom are products of what I call “Old Right” thinking.

By the “Old Right,” I mean classical Fascism and National Socialism and their contemporary imitators who believe that White Nationalism can be advanced through such means as one party-politics, terrorism, totalitarianism, imperialism, and genocide. Earnest specifically names Adolf Hitler as one of his inspirations, alongside Jesus Christ, the Apostle Paul, and Martin Luther. Earnest also names Ludwig van Beethoven, Pewdiepie, Moon Man, and Pink Guy. The last three, of course, are mentioned merely as Alt Right in-jokes.

As I argue in my essay “Against White Nationalist Terrorism,” White Nationalists are making tremendous progress by means of propaganda. We are converting people to our worldview. The more people we convert, the sooner we regain control of our homelands. This is why our enemies are hell-bent on censoring and deplatforming us. They use every shooting spree like Tarrant’s or Earnest’s as a pretext to further clamp down on our freedom of speech, which restricts our ability to change minds and delays the implementation of sane, nationalist policies. And every day we are delayed is paid for in white lives.

John Earnest killed one 60-year-old Jewish woman. But far more white people will die if his deeds lead to further erosions of freedom.

There is some reason to think that Earnest actually intended to encourage deplatforming. First of all, he makes it clear that he took primary inspiration from Tarrant, who expressly wished to provoke a crack-down on free speech and gun ownership. Second, Earnest’s mention of Pewdiepie was clearly patterned on Tarrant’s shout-out, which led to the shutdown of Pewdiepie’s Reddit page.

Was Earnest even thinking about the greater good of our people? Or was he merely indulging in blind, self-destructive spite?

Did he think this is just a game? The references to Pewdiepie, Moon Man, Pink Guy, and other Alt-Right memes are manifestations of the degenerate Alt-Right swamp of ironism, frivolity, and anti-intellectualism that will keep breeding catastrophes until it is drained and replaced with a nobler and more serious ethos.

And how exactly does praising spree killers help White Nationalists establish ourselves as representatives of the long-term best interests of our people?

I wish I could erect a wall between myself and the kind of unstable, undisciplined people who go on killing sprees, but you can’t change the world from a bunker. Thus responsible white advocates need to adopt the next best course of action: (1) we must be alert to the signs of mental instability and inclinations toward violence and rigorously screen out such people, (2) we need to draw clear, unambiguous intellectual lines between New Right and Old Right approaches, and (3) if anyone makes concrete threats of committing such acts in our circles, we need to be the ones to call the police.