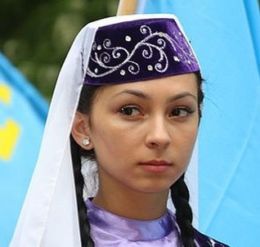 A Crimean Tatar woman. The Ukrainian government passed a law in July recognizing the Tatars as one of the indigenous peoples of Ukraine.

The popularity of anti-colonialism and the term “indigenous” speaks to our anti-white age. We’re told all white-founded colonial countries are stolen land and that the true owners were dispossessed. “Indigenous Peoples’ Day” now replaces Columbus Day. This discourse makes ordinary people think that land has a rightful owner, and that that owner is never white.

However, some Right-wingers think we can utilize this discourse for our own purposes. Whites can be indigenous, too, and we are victimized by colonialism, they argue. They think that by appealing to the zeitgeist, we can be more in tune with the times. A few may even think it might create a degree of solidarity with other “indigenous” peoples fighting against the imperialist menace.

But this idea won’t work. This framework is inherently anti-white. We’re not going to trick Left-wing indigenous activists into supporting our cause. Moreover, this would entail condemning our own past on behalf of a misguided political strategy.

Much of this was pointed out in a great article by one “Stone Age Herbalist” for the site Countere. Herbalist argues that this “indigenous” appeal is a poor strategy and that “we should instead be asserting that our nations and identities are legitimate precisely because our ancestors conquered, fought, and died for the land, not because we are mythically indigenous to it.”

He says that the best definition of indigenous is

a group of people who lived in a territory before the occupation of a colonial power; their separation from the main bulk of the population, both culturally and politically; people who have an ethnic and territorial distinction from the dominant social power and a lack of political power at the state level. Prior to all understanding of indigenous, and the main action upon which it rests, is the act of colonization.

Herbalist combs through academic studies to assert that this concept is built on “the need for legitimate indigeneity to be exotic, unfamiliar, and marginal” — essentially everything that is the opposite of white. Herbalist notes that the framework of indigeneity is created by the European colonialism of the early modern era and obscures all other examples of human conquest and expansion. Human history doesn’t matter until Europeans conquered the New World, according to the colonialist mindset. “Thus indigenous as a category exists in an ontology of the world where Europeans are colonizers and everyone else is colonized, which is why the gatekeepers of international law will never allow Europeans to claim indigeneity,” Herbalist states.

It should be clear then, that anyone who looks to resist mass migration and multicultural social transformation by invoking indigenous status is falling into a trap. Europeans will never be indigenous. The very definition of indigenous requires a minority to be excluded and dispossessed by the state, to have their collective rights mediated by large, unaccountable international bodies, and to cede sovereignty over their territory. This is a disaster for any historical conception of ethnic identity.

The indigenous rely on the United Nations and other globalist bodies to protect their interests. This is not an option available to whites. The entire globalist order is built on giving away our resources and power to non-whites. The UN will listen to tiny tribes or dispossessed people in Third World countries; it will not listen to us. That is why Herbalist argues it is better to rely on the right of conquest to morally defend ourselves. Like all peoples who claim a homeland, America was purchased through the blood and toil of our ancestors. The fact that we won this land makes it ours, not through some appeal to a concept invented by Leftists.

States expand and collapse, ethnicities form and dissolve, alliances are made and broken. This is the norm for world history and the ossified nature of modern life is a product of both commercial and military globalization. The American aegis has made us complacent and unable to imagine governing ourselves in our own interests.

This article is a necessary corrective to the anti-colonialist temptation on the Right. It’s easy to fall for it when we feel subjected to the silliest empire to ever exist, but the Globalist American Empire is unfortunately our own creation. Many of its leaders and pawns are whites, and many whites happily benefit from it. It’s not a foreign system imposed upon us by an invading force; we — or rather, some of us — are the ones responsible for it.

Anti-colonialism leads to the trap of condemning all conquests. How can we say America is our land when we took it from someone else? How are we supposed to celebrate the great warriors and statesmen of our past when their glories came at the expense of the vanquished? How do we reconcile our entire national history with an anti-colonialist framework if we’ve always been the colonizers? All of these foundations are given away for the sake of a poorly thought out political strategy.

This idea is especially problematic for European-Americans. We clearly displaced another people to found our country. Europeans can at least claim that they’ve lived on their lands for most of recorded history. We do not have that benefit in our case. Our attacks on colonialism would undermine our own position in the United States. As stated above, it’s also harder to identify the colonizer in our struggle when we helped set up this system. It’s much easier for non-whites, who identify us as the colonizers.

The Empire we rage against is built on the moral framing that underlies anti-colonialism as well. America forced Europe to give up its colonies after the Second World War and competed with the Soviet Union to present itself as the true anti-imperialist power in the Cold War. The Empire forced Rhodesia and South Africa to surrender to their “indigenous” populations. It’s now forcing native whites to do the same in their own homelands. This is not an empire that will somehow decide that our complaints are legitimate.

The Dissident Right is fond of adopting Left-wing ideas in the hope it will make us more palatable to some mystery audience. This audience is imagined to be open-minded Leftists who would somehow overlook our “racism” and see us as an oppressed people. With the correct argument, these people could be won to our side – or so the logic goes. The same mindset explains why many on the Right think highlighting anti-capitalism or support for universal healthcare is a good strategy because it will win over this demographic. The problem with this is that this demographic does not exist. Leftists hate white people more than anything. They will never see us as an oppressed people worth saving. They will always see us as the colonizers. It makes no sense to expend so much energy trying to appeal to them.

The indigenous argument also does not appeal to potential sympathizers on the Right. Indigenous is a term firmly associated with the erasure of our heritage. Most people know it from “Indeigenous People’s Day,” an explicitly anti-white holiday meant to denigrate European settlement. They’re not inclined to see themselves as indigenous when that’s the other side’s identity. It’s an alien word that they don’t see themselves in.

All this strategy amounts to is a condemnation of European history for the sake of pretending that we’re the real Leftists.

Stone Age Herbalist is correct about the strategy to emphasize. The regime’s morality privileges victimhood and the oppressed. We must reject that. There is nothing shameful in conquest. This is how humanity has operated from the beginning, and it will continue to do so until we vanish from the Earth. It’s simply the way we are. No other people apologized for being victorious in war before the modern white man came along. The only shame comes from submission and loathing your own flesh and blood.

We have nothing to feel ashamed about. The right of conquest makes this land ours. There’s no need to defer to Leftist theories to uphold our birthright.

» Lessons from Robin DiAngelo on What It Means to Be White, Part 1