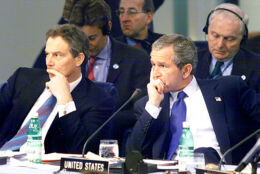 Tony Blair & George W. Bush: The bromance that brought you 20 years of the “War on Terror.”

A big problem with white people is that we think everyone wants to be like us. I’m not including those of us on the Dissident Right who have been disabused of that notion, but if we are talking white people in general, it is a big problem. Too many whites believe that inside every POC is a white person dying to get out.

A lot of white people believe that they are Homo sapiens’ final form and the only reason everyone else isn’t like white people is because we are simply ahead of the curve. Whites have had all these philosophical, scientific, and political revolutions that other races haven’t, after all. Whites perfected the art of rational inquiry. The thinking goes that once other races and cultures have access to the same ability to reason, education, and material conditions that whites have that they will inevitably arrive at all the same conclusions that whites do. Thus, whites are basically waiting for non-whites to “catch up,” but once they do, they will be exactly like us. It is simply inconceivable to many whites that they won’t be.

Much mischief has come from the idea that non-whites can be like whites, but a great deal of mischief has also come from believing that they want to. An excellent example of this would be the War on Terror, which is now finally winding down to a close.

I have no doubt that the architects of the War on Terror had their own cynical and nefarious reasons for waging it, but many of ordinary citizens supported it for altruistic reasons. It’s ironic that many liberals at the time called the wars in Iraq and Afghanistan “racist,” but in reality, you had to have drunk some of the same anti-racist Kool-Aid to believe they were ever a good idea.

There was a popular phrase going around during the Bush years: “universal values.” The thinking went: Despite the fact that the peoples of the Earth may have different religions, different customs, and different conceptions of morality, there are certain values that are “universal” and which everyone –regardless of their race, color, or creed, all over the globe — agreed upon. If anyone didn’t, it was only because some sort of evil people had brainwashed them.

“Universal values” was a form of projection. It was whites projecting a white worldview onto non-whites. When you actually take a closer look at what these “universal values” were, it was all just a bunch of stuff that white people like.

According to a 2003 speech by United Nations Secretary-General Kofi Annan, “universal values” were “peace,” “freedom,” “social progress,” “equal rights,” and “human dignity.” These are all very vague terms.

Perhaps everyone in the world likes the idea of “freedom,” but you will find vastly different conceptions of what that means across the world. In the West, when we think of “freedom,” we think of individual liberty and the freedom to say and do what one wants. In a Communist country, freedom might be conceived as freedom from the ruling class and wage slavery. Some countries might see freedom as freedom from foreign interference. To the National Socialists, “freedom” meant the freedom to pursue their national destiny. For example, the 1935 Nuremburg rally was called “the Rally for Freedom,” which was addressed toward the restrictions and war guilt that had been imposed on Germany by Britain and France.

Therefore, the kind of freedom that Kofi Annan seemed to be talking about is hardly universal. But you repeatedly heard this phrase during the Bush years as the authorities kept insisting that things that what white people want are in fact what everyone wants.

In a 2003 speech to a joint session of Congress, George W. Bush’s best friend Tony Blair said (emphasis mine):

There is a myth that though we love freedom, others don’t; that our attachment to freedom is a product of our culture; that freedom, democracy, human rights, the rule of law are American values, or Western values; that Afghan women were content under the lash of the Taliban; that Saddam was somehow beloved by his people; that Milosevic was Serbia’s savior. Members of Congress, ours are not Western values, they are the universal values of the human spirit. And anywhere . . .

George Bush said similar things, even years after the fact. In a 2016 retrospective interview on his presidency, Bush claimed (emphasis mine):

One way is to say there are some universal values that transcend individual sects, such as the universal right for people to be free, or the universal right for women to live in a culture that respects them. Those are universal thoughts. These aren’t western thoughts. When I was President, people would say we’re trying to impose our values. I always felt like that was kind of an excuse for isolationism. The values that I thought we were proposing transcended American and British values. They’re universal rights. The idea of a child growing up in a society where it’s peaceful is a universal thought. The ability for people to express themselves in a public square, that’s not a religious thought. That’s a thought that speaks to the humanity and the importance of every individual.

There was a lot of flapdoodle about Iraq and Afghanistan being national security threats to the United States, and yet it can’t be understated the extent to which race denialism was leveraged to sell the War on Terror. The go-to examples of “universal values” in action were always Germany and Japan after the Second World War. According to their narrative, the Allies walked into two very illiberal countries, slapped some people around, and turned them into good liberals. Surely the same trick would work again in Iraq and Afghanistan. But for that to make sense, you had to believe that there was no fundamental difference between Germans and Japanese on the one hand, and Iraqis and Afghans on the other. The whole argument was fundamentally based in race denialism.

Again, it is inconceivable to entirely too many whites that non-whites don’t want to be like us. Iraq was a dictatorship and Afghanistan was a religious theocracy, and many whites would find living in either system intolerable. I have no doubt that many — including those at the top with their more cynical motives as well — genuinely believed that Americans would be greeted as liberators. But when the initial invasions were over and the populations of both countries didn’t embrace the “universal values” being touted by the occupation authorities, cognitive dissonance kicked in and you started hearing another phrase that was particularly popular in conservative circles: “slaves in love with their chains.” Muslims were just too dumb to know what was good for them, it was claimed.

With the Taliban’s recent blitzkrieg across Afghanistan, the cognitive dissonance has been ratcheted up to 11. Neither liberals nor cuckservatives can really explain why the Taliban was able to take over so quickly or why the Afghan army gave so little resistance. They blame Trump’s decision to pull out or blame Joe Biden for bungling the withdrawal, but neither can explain why liberal values, if they are so “universal,” did not take hold like over the course of twenty years like everyone said they would.

Some are just in denial and will point to the people falling from airplanes as proof that liberal values actually did take hold in Afghanistan – as if people clinging to a plane as it is taking off are the ones who are in their right frames of mind. I would like to think that reason and a belief in science are part of Western values, and if someone thought it was physically possible to survive a thousand-mile flight on a jet by holding on to a wheel, then they clearly did not embrace our values.

For me, what is so satisfying about the Taliban’s stunning victory in Afghanistan is just how much it completely destroys the notion of “universal values.” In January 2003, Tony Blair told a group of British ambassadors:

In the end, all these things come back to one basic theme. The values we stand for — freedom, human rights, the rule of law, democracy — are all universal values. Given a chance, the world over, people want them.