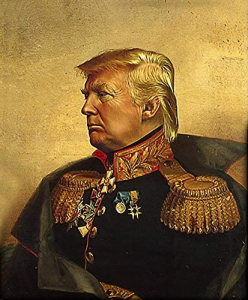 There can be no circumstance under which you will not be our president for the next four years. Of course, I don’t presume to know even a fraction of what you know about the fraud the Democrats have been perpetrating against the American people these past few days. It’s outrageous. It’s criminal. You know it. I know it. The American people know it. And by the way the Democrats have been thwarting our efforts to monitor vote counting and investigate irregularities, I believe they know it too. They are hiding their guilt by refusing to join us in auditing our clearly compromised election process. They are hiding their guilt by declaring Joe Biden the victor before any of your lawsuits have been resolved. They are so obviously in the wrong that it would seem to be fairly simple to demonstrate this in the courts and to the American people.

I do fear, however, that there is no way out of this mess without violence and oppression against our enemies — which we all know they deserve. I sincerely hope you have prepared for this. Recently, you said that you were prepared to use “every aspect of the law” to keep our enemies from stealing this election. This might make for effective rhetoric, but it does worry me. Were the Democrats using every aspect of the law when they were shipping phony pro-Biden ballots to polling places in the middle of the night? Or when they were kicking out GOP election observers, or when they were filling out ballots themselves, or ordering postal workers to backdate late ballots? The list of Democratic law-breaking goes on and on. So why are you so set on using “every aspect of the law” when our enemies, who are a hair’s breadth away from invading the White House, studiously avoid such scruples?

Of course, no one wants you to break laws when bringing these criminal Democrats to justice at the beginning of your second term. However, there are only two good ways for this to end:

Either you achieve victories in court, which rightly allow you to remain president, and then crack down hard on Leftist agitators as they riot across the country — or you don’t achieve these victories, and then crack down on our enemies anyway. That’s it. A Joe Biden presidency would be illegitimate. You’ve said so yourself. In your recent address to the nation, you rightfully claimed victory. You claimed you had the majority of legal votes cast. You called out the Democrats for lawbreaking. So why on Earth should you validate their lawbreaking by voluntarily ceding power to them?

Further, please don’t think that Democrat lawbreaking will stop once senile Joe Biden is installed as the forty-sixth United States president. Of course, you know that bomb threats recently forced your supporters to twice change the location of their rally in Detroit. This kind of terrorism will only get worse once you’re deposed, and the Democrats will do nothing to stop it. They will be too busy packing the courts and using their now tried-and-true method of massive voter fraud to gain insurmountable majorities in all halls of power in the American government. They’ll also use the Trump Accountability Project to hound your financial supporters, colleagues, and employees. Who knows what else they’ll do? Open the borders? Defund the police? Revive Affirmatively Furthering Fair Housing? Reinstate critical race theory? Undo all of your beautiful trade deals? You know they’ll ruin all the great work you’ve done. They’ll also have four years to prepare their next wave of voter fraud, so please don’t think you can leave for now and run again in 2024.

They may even go after you personally. Or your family. After all, Nany Pelosi has already referred to you as an enemy, and the Biden campaign has been threatening to physically remove you from office. If three years of Russia-gate, impeachment, COVID hysteria, and riots have taught us anything, it’s that these people on the Left will stop at nothing to achieve power. There is no bottom to their hatred — for you, and for the American people who support you. Remember, the Tsar abdicated quite peacefully to the Left in 1917, and look what happened to him. . . and his entire family.

So, Mr. President. Please do not cuck.

Our very republic hangs by a thread at this moment, and as fate would have it, you are it. Any sign of weakness from you, and we’re finished. It doesn’t matter what the pundits, governors, congressmen, senators, attorneys general, or secretaries of state say. All that matters is whether you have the balls to see this through. Please do the right thing and under no circumstances allow a President Harris to lead that semi-demented China stooge Joe Biden into the White House. Please do not validate their cheating. The fate of the nation and so much more depends on it.

You may not have all of the GOP behind you. And you may not have many of our institutions behind you, either. But what you do have in your corner is the nearly 70 million Americans who voted for you, many of whom are more enthusiastic for you than any other Republican president perhaps ever. You have an unprecedented groundswell of support right now. Please remember, the people elected you. They did not elect Joe Biden. Our corrupt, Leftist elites “elected” Kamala Harris, and used the elderly former Vice President as a Trojan Horse. And then, when the time is right, they’ll oust him as well.

This whole thing is as phony as a three dollar bill. It is nothing less than a coup. Please put it down.

I seem to remember something about militias in the Second Amendment. Do you need a militia, sir? Are things going to get a bit rough in the near future? Do you think you might need to deputize tens of thousands of patriots to help the National Guard and the police arrest Leftist rioters for trying to spoil your second inauguration? If the Left can use Antifa as its paramilitary wing, why can’t we have one ourselves? Just say the word. I’m sure these patriots have a gun or two between them and know how to use them.

After all you’ve done for them, I’m sure they would be happy to do a thing or two in return for you.

One last thing to consider: If you put this Leftist coup down, you will be remembered and celebrated for centuries. You will achieve immortality. You’ll be our Caesar. You’ll have crossed that Rubicon. You’ll have saved the republic, even if you have to change it into something else to do so.

Rubicon Don. It has a nice ring to it, doesn’t it?

» The Tangled Web of Life