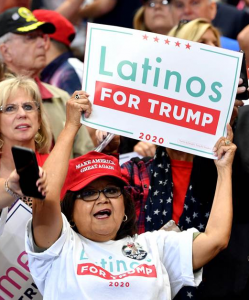 In what might prove to be the most hilarious upset in electoral history, the “Nazi” candidate may have won a second term solely by increasing his support among every group except for white males — thus allowing all the “Nazis” the pleasure of blaming women and nonwhites even in victory!

Is this what they mean by a “win-win”?

Based on Edison exit polls from 2016 and a New York Times meta-analysis of exit polls from 2020, I came up with this handy-dandy chart to show how Trump gained ground with every demographic except the white males to whom he allegedly panders nonstop using elaborate hand signals and a series of nearly inaudible grunts: 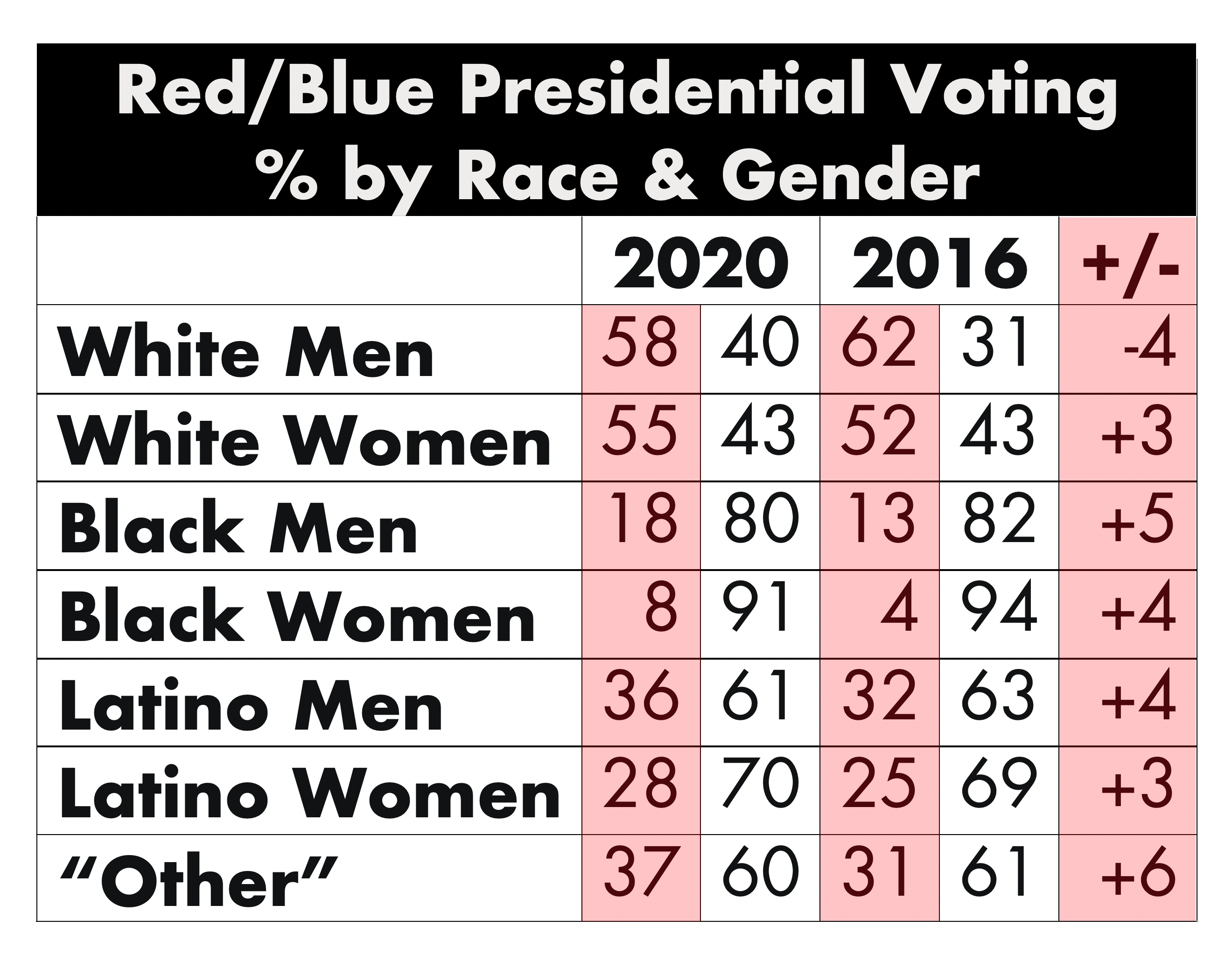 So Trump’s support went down four points with white males but up from three to six points with every other demographic. I have no idea how they define “Other,” but I’ll assume it’s some odd amalgamation of homeless half-breeds and alcoholic Eskimos. But presuming these polls are accurate for no other reason than the fact that I find the inevitable conclusions to be funny, the only group upon whom the ceaseless caterwauling of “TRUMP BAD NAZI MAN” had a discernible negative effect was all the potential white-male Nazis to whom Trump allegedly appeals and who were presumed to be his only remaining reliable base.

One could go either way with this information — either a certain group of Nazis-in-training were dissuaded from going Full Hitler as a result of being propagandized into thinking that Hitler-made-flesh in the corpulent form of Donald Trump wasn’t really all that cool anymore. . . OR. . . a tiny, committed band of fiercely defiant Nazis who wouldn’t even mind being called “Nazis” were put off by Trump’s endless pandering to the gays and the blacks and the women and the Jews — to everyone except the white males.

It could be a combination of both factors, but it’d be funnier if the latter were more decisive. If Trump winds up winning, it’s because he alienated the Nazis, and the media will look even dumber blaming the Nazis this time around than they have for the past four years. They’ll still do it, of course — but they’ll look dumber than ever in their blind chutzpah.

If Biden wins, it’s because he alienated women and nonwhites and because Trump lost the Nazi vote. If for no other reason than to keep sane by amusing ourselves, we can credibly run with a narrative that Joe Biden’s victory is proof that white supremacy still reigns supreme in America.

If Biden wins, the only group that gets to stand back, shrug, and toss up their hands in a passive-aggressive gesture of faux helplessness are white guys: “Hey, don’t blame us — we actually progressed this time around.”

If Trump wins, everyone still gets to blame everyone EXCEPT white males. The white women who voted for Biden get to smear their menstrual malice all over the white “Karens” who slithered Trumpward in 2020 with slightly more vaginal lubrication than they did last time. Black women get to blame all white women regardless of whom they voted for, because everyone knows that whites will vote for their whiteness over their genitals every time, whereas blacks can’t even tell the difference between their own blackness and their genitals and often conflate the two. In turn, everyone can blame black women for DOUBLING their support of Trump this time around, and I don’t know anyone alive who doesn’t enjoy blaming black women for at least something. Everyone in the anti-white-male coalition will blame black males for voting red in increasing quotients with every election since 2008. Blacks of both genders will blame Latinos for quietly taking their jobs, kicking their asses when it comes to gang warfare and controlling the drug trade, and refusing to acknowledge that they share a common bête noire in the gringos. Black women will pretend Kamala Harris is a black woman and blame Cuban males for hating black women. In turn, Cuban males will accuse black women of excessive body odor. Urban women will blame suburban women, who then will blame rural women — but all three groups will blame nonwhite men, who will respond by raping women regardless of their geographic location. Self-hating whites and white-hating nonwhites will join forces to blame women and coloreds for “voting against their interests.” Jews will blame everyone except Jews, just like they always do. And everyone, regardless of race or gender, will blame the alcoholic Eskimos and homeless half-breeds.

Then, when everyone turns in unison to blame the Nazis, the Nazis can just shrug and say, “This one’s on you silly little kids — we didn’t even vote this time around.”

Trump may have indeed lost a sliver of the white-male vote because, despite what all the naysayers are neighing, he throws white males under the bus every chance he gets. But the one positive after-effect of ignoring white males is the fact that white males, at least for once, don’t get blamed, either. And very little about politics involves actual policy; most of it revolves around successfully blaming the enemy.

So if Trump is able to eke out a victory before the entire nation is engulfed in flames and they finally send in the UN parachutists to take over the country and save us from ourselves, those millions of famously fragile progressive psyches must deal with the eterna-torture of knowing that: 1) the Nazis won; 2) the Nazis can’t be blamed for the victory; 3) everyone BUT the Nazis is to be blamed instead. There is no victory for the enemy, and neither will there any psychological relief. They will be imprisoned in a brain-hell fashioned from their own fear and laziness. It’s a thought that’s so tantalizingly delicious, I could almost goosestep!

Mind you, I’m typing this at high noon EST on Wednesday. According to the official tabulations — which I don’t trust, and which is also why I don’t trust anyone who trusts anything after the year we’ve had — Biden currently leads the popular tally by a little more than two million votes but will apparently need every last mail-in vote to go his way if he hopes to squeak by in the swing states and win the Electoral College.

It all stinks to high heaven. This will be the third contested presidential election of the last six. It also may be the third in the last six where the popular vote conflicts with the Electoral College tally. This shit will be hung up in courts for weeks and possibly months. No matter what happens, neither side will admit defeat, and the country will continue to crack along its already irreparable fault lines. It’s a prescription for mutual mistrust and four more years of endless partisan hatemongering and riots and finger-pointing and death threats and juvenile narratives of good v. evil and slow-boiling civil war — all of the things that peaceful elections are supposed to solve rather than exacerbate.

Such is the state of our “democracy.”

As far as cliffhangers go, this election provided some unexpected drama and plot twists. But no matter how this scene plays out, it’s evident how the movie will end — to be more precise, it’s evident that the movie will end. This was the first election in my life where major cities were boarding up their windows in anticipation. It was the first where a higher quotient of citizens was certain of post-election violence than supported either candidate. It’s the first time I’ve felt that we live in a post-truth, post-trust world. I see a bit of pathos in the fact that even though the whole rusty old ship is headed for an iceberg, people still think it matters who the captain is.