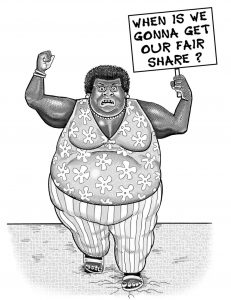 Another week brings us seven days closer to the mass graves they’re digging for us.

Do we dare ponder the moment the entire country realizes they severely overestimated black potential and that it’s too late to do anything about it?

Sean “Diddy” Combs is a negroidal cultural impresario with no discernible talent or insight but whose net worth is estimated at $855 million. If one assumes that Diddy suffers from a typical black-American intelligence quotient, that means this incurably racist nation has awarded him $10 million for every IQ point.

Somehow, though, he manages to feel more terrorized as a black-American near-billionaire under the Trumpenreich than if he’d been left in his ancestral homeland to eat rocks and swat at flies. This is despite the fact that before Trump declared his candidacy for president in 2015, Diddy — along with 76 other hip-hop artists — worshiped Trump as a capitalist alpha-male pimp daddy.

But on a recent podcast with yet another mentally impaired black musician, Diddy waxed near-genocidal:

White men like Trump need to be banished. That way of thinking is real dangerous. This man literally threatened the lives of us and our families about going to vote. . . . We’re in a war. We’re in a war of love versus hate.

Blindly ignoring reality as his kinsfolk are wont to do, Diddy also tweeted about how blacks face extinction and that no one even talks about them anymore, which may lead to a completely justified RACE WAR, which is why he’s founding a not-at-all-racist political group called Our Black Party:

We’re on the verge of becoming extinct. The NUMBER ONE priority is to get Trump out of office. . . . The people that have the most responsibility and should be SCARED TO DEATH of this man are white people. WE ARE ON THE VERGE OF A RACE WAR. As black people, we aren’t even a topic of real discussion.

How many bales of crack has this glorified primate been smoking? Aside from COVID-19, has there been ANY other topic of discussion in America this year besides that national embarrassment collectively known as “the blacks”?

I’ve been avoiding the upcoming election at every turn, mostly because I believe that demographics have already doomed the American experiment. I am hardly a political strategist, but I believe in my heart that the only chance Donald Trump has of winning this time around is if he openly calls someone — preferably Diddy — a “nigger” live and on camera.

I kid, of course. Everyone knows whites are no longer allowed to use that heinous descriptor. In fact, whites are so collectively demoralized that they like it better when a black person calls them “nigga” than when they call them a “cracker” or an “asshole.”

Bilous waves of outrage greeted the news that someone in Illinois recently posted a public notice for a business allegedly called the “Nigger Nazi Consulting Board.” There was likewise much ado about the fact that a white man who thought it’d be a good idea to visit Jamaica was caught on camera repeatedly using “the ‘nig’ word” after accusing a black woman of kneeing him in the stomach as they sat down for an NYC-bound flight. And a black-run German group calling itself Initiative Schwarze Menschen in Deutschland — whose motto is “Stop the N-word” — recently shamed a German online dictionary into instructing any Kraut who even thinks about saying Neger to instead choose the much clunkier term “Afro-German.”

A generation or two ago, when white people were brainwashed and guilt-tripped into being nice to nonwhites, I doubt anyone expected that after allowing tokenism to rain pennies from heaven in an effort to make nonwhites feel “included” and “loved” and “accepted,” nonwhites would show their gratitude by whining to the point where every last Caucasian on the continent wished they were deaf. A group of “actresses of color” who were hired to act as colored female wrestlers on a Netflix show titled GLOW recently penned an open letter to the studio execs who showered them with more money than they’d ever seen in their lives about how they felt “disempowered” by their roles and how they’d be used as cannon fodder to peddle “racist. . . white storylines.”

I sorely doubt whites expected that the goalposts defining “racism” would be moved onto an entirely different football field, one where no matter how much a nonwhite racial-identity group calls for the outright slaughter of white people and the cannibalism of their babies, the powers that be wouldn’t list them as a “hate group” unless they also targeted women, homosexuals, and nonwhites. But that’s exactly what the SPLC recently did when it declared black-supremacist groups to be entirely hate-free so long as their animus is aimed solely at whites:

The Black Separatist listing created a color line bias, separating hate and extremism by race and granting the appearance of a false equivalency of equal hate on both sides. But the hate is not equal. Black separatism was born out of valid anger against very real historical and systemic oppression. . . . While these groups can be virulently anti-white, this prejudice does not represent the same threat as white supremacy in America. . . . Black separatist groups earn their place among our hate listings not for their calls for separation, but rather for how entrenched these groups are in antisemitic, anti-LGBTQ, misogynistic and xenophobic rhetoric.

The SPLC also produces a podcast called Sounds Like Hate — sounds like I wanna listen. The anti-white hate group also insists on labeling groups such as the Proud Boys — who are led by a black Cuban and take such pains to disavow “racists” and “Nazis” and “anti-Semites” that it’s a wonder all its members aren’t addicted to painkillers — as impenitent hatemongers whose leaders “regularly spout white nationalist memes and maintain affiliations with known extremists.” Along with their co-ethnics at the ADL, the SPLC brings the Hate Hammer down hard on tech giants to the point where one day soon it may become impossible to even think a pro-white thought.

Music-streaming giant Spotify currently hosts an estimated 65 million songs but felt the need to announce to the world that they recently uncovered a whopping 20 ditties that allegedly use “anti-Semitic stereotypes and language.”

And last Monday, a group called the Conference on Jewish Material Claims Against Germany successfully pressured Facebook CEO Mark Zuckerberg to ban all “posts that deny or distort the Holocaust.” Declaring that “Holocaust denial is a plague,” the New York Daily News announced to its own horror that nearly two-thirds of Millennials and Zoomers weren’t aware of the “6 million” figure. Even worse, one in ten “thought that the Jews were responsible.”

Despite the fact that Jewish median household income in America is more than twice that of Caucasians, and keeping in mind that if you dare to even think anything negative about Jews you will be crushed like a roach, we all know that Jews just can’t catch a break in this country. Because Donald Trump signed a bill last year enabling Jewish students to file harassment complaints, a gaggle of Jews at the University of Illinois at Urbana-Champaign recently kvetched that they “faced an unrelenting campaign of anti-Semitic harassment.”

A Jewish chiropractor who recently posted an anti-white banner outside her office made headlines when someone defaced it with a horrible anti-Semitic slur beginning with the letter “K.” An “Anti-Semitic Alaskan man” who was convicted on gun charges has been ordered by a judge to read books about the Holocaust and write essays about it.

Meanwhile, the anti-white propaganda proceeds at a level that would make Hitler proud, assuming that Hitler hated white people.

Last week, San Francisco’s Board of Supervisors unanimously approved the Caution Against Racial and Exploitative Non-Emergencies Act — AKA the “CAREN Act,” whose name is derived from a trope that blames white “Karens” for falsely accusing blacks of crime and which ignores the fact that blacks commit crime at rates far out of proportion to their numbers.

We don’t want what happened to Emmett Till in 1955, or the long history of false accusations of black men and boys in this country, due to weaponizing law enforcement, to threaten, terrorize, and sometimes even kill them, to ever happen again.

I’m pretty sure that sort of thing hasn’t happened since 1955, “Shamann.” And this law does not specify exactly how it would determine that someone was motivated by “racist fear.” In essence, it gives blacks carte blanche to commit even MORE crime while criminalizing the white women who dare to report it.

In Fresno, a brown land whale named Esmeralda Soria spearheaded a resolution that allows the city’s Historical Commission to screen new and existing buildings and monuments to ensure they are not named after a “racist or bigot,” which increasingly seems to be coded speech for “white person.”

What’s far worse, though, are the whites who make ostentatious and unsolicited public displays of their abject submission. A white woman writing for a site called The Conversation — which may want to consider renaming itself The Lecture — contrasted how belligerent Donald Trump was in the first presidential debate with how dispassionate Mike Pence was in his debate and STILL found a way to blame them both with flexing “authoritarian white masculinity.”

A self-described “humor writer, stand-up storyteller and former journalist from Louisville” recently published an op-ed in that town’s Courier-Journal with the appallingly masochistic title “Some of us whites should notice how we have messed up America and try to make amends”:

I get the low feeling we whites should just clear out of America. Go before we screw up the place any more. . . .The U.S. Census Bureau says that by 2044, we whites will be a minority in this country ourselves. . . . So it might be a good idea for some of us whites to make a few more friends of color — while we still can.

A white therapist named Cristina Combs who allegedly spent “years of struggling to navigate the role and presence of whiteness in her personal, academic, and professional journeys” is now offering a two-hour “Recovery from White Conditioning” lecture that includes a “white supremacy 12 step program” whereby whites who love to hate themselves can fall in love with that self-hatred all over again.

White people — they’re the worst. Didn’t used to be that way, though.